The Conversation is an autonomous apparatus that incorporates an analogous and a digital part.

These almost inseparable elements try to adapt to each other. As the process does not have a linear program it is not obvious which part controls whom.

The machine consists of 99 solenoids mounted in a circle. Together they carry three rubber bands (attractors) in the center of the circle.

Each magnet works autonomously and tries to adapt to the forces in the network. The aim of the system is to keep a balance of forces. 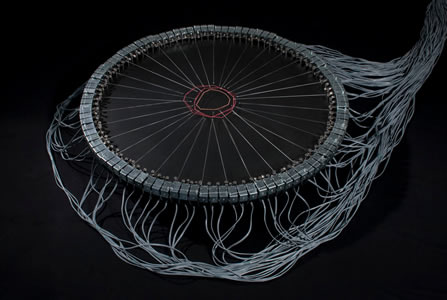 By turning the machine on, a process is activated that tries to conserve its initial state by contraction and relaxation. The rubber band acts as mediator between the single solenoids. Different initial rubber-band configurations (tensions) generate different patterns in time.

Constellations appear and stay until disturbances make them decay. The whole installation is immersed in a polyphonic buzz generated by the constant shifting forces of the solenoid array.

The Conversation is part of a series of installations and sculptures that deconstruct the fundamentals of symbolic processes. +

“Break the pattern which connects the items of learning and you necessarily destroy all quality.” 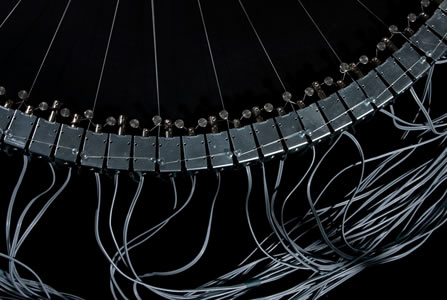