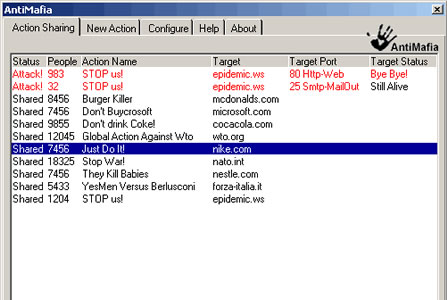 If we leave aside its historical precedents, Software Art, in its classical definition formalized by the Jury Statement of “Transmediale 2001” [1] and extended
by Florian Cramer [2], saw the light in 1997 with The Web Stalker of the English Group I/O/D and with the theoretical speculation started by one of the software
authors, Matthew Fuller. Right from this first example and definitions, Software Art reveals its radical nature. The fact itself of transforming software from a mere instrument into “subject” and”contents” of a cultural and artistic reflection
represents a Copernican revolution liable to be considered as heresy. Similarly heretic is the idea of adopting a language (HTML), a protocol of communication (HTTP) and the whole system of cultural objects (the web) and make them visible in a form that contrasts with their own original function. Software Art is radical even in its most harmless and politically neutral manifestations; when, in addition, it overturns the structure of the browser in controversy with the
standardization of its interfaces, and when it adopts a slogan that sounds like: “software is mind control, get some”, then the controversy turns into poetics,
the prime mover of a creative process.

Radical Software is an exhibition including some recent examples of radical software. The name pays explicit homage to the magazine founded by Ira Schneider and Beryl Korot in 1970, that had the merit to combine, for the first time, political considerations and use of the media (in that case mainly video and television). But, if the deep nature of these projects is political, the initial target of the subversion they put into effect is rarely so; and, even when it is, the blow it receives is never direct, but it is the ultimate consequence of an attack directed elsewhere, similar to a bullet hitting the mark after being diverted by a series of obstacles that are as many primary targets. This is thecase, for example, of Bush Bot 0.4, of the ROVERBOTICS Group: which, after insinuating doubts – with the support of manipulated images – that George W. Bush may be a cyborg, demolishes his politics, creating the software that nourishes his totally artificial intelligence, allowing people to talk to him and even dictate his new speeches, through a simple chat system. No doubt Bush is the target, but the blow is struck by drawing on a by now classic story – Simulacres by Philip K. Dick – and by parodying artificial intelligence algorithms. In the same way, Mc Donald’s Videogame, of the Italian game factory Molleindustria, attacks the famous fast food chain, by subverting the form, by now highly widespread, of advertising videogames. Where Next, realized by the same Molleindustria in collaboration with the advertising agency Guerrillamarketing, attacks the spectacular way adopted by the media when presenting terrorism and their ferocious abuse of forms of betting games and
the most common advertising tactics as well as that extraordinary instrument of location that is Google Earth, with a type of political incorrectness that is directly proportional to the implications of what it reports. Both these products are very distant from Software Art from a formal point of view and yet they are very close to it from a conceptual point of view.

Different is the case of GWEI (Google Will Eat Itself), realized by UBERMORGEN.COM in collaboration with Italian Alessandro Ludovico and Paolo Cirio, that takes to the extreme consequences the algorithm of capitalism entirely adopted by Google, but it does that to induce one of the powerful companies in the world to devour itself in an extreme form of digital cannibalism. The critical scope of Software Art doesn’t even spare the culture of shared knowledge based on hacker culture and the activism of the media. Un wiki, by Wayne Clements is a very simple software that limits itself to retrieving and making visible the log file with contents refused by the open and democratic community of Wikipedia: a crafty speculation on the paradoxes of a system that matches the maximum opening made possible by the software and a substantially oligarchic structure as the only guarantor of the contents quality.

Antimafia (2003), of the Italian group [epidemic] is instead software that automates and coordinates collective actions. Based on a “peer to peer” action,
it makes it possible to share hacking actions without any intervention from the user – apart from the activation of the programme – and without a leader that coordinates the action. It might seem the definitive solution to the problem of the effectiveness of protests online, the “killer application” of net activism; in reality, the first victim of this programme is activism itself, deprived of any human components and above all of leadership. Which justifies the strange story of this project, rejected and censored by the same community it was meant for. A censorship which was actually caused by an error of perspective: if Floodnet, software made available to a community for a collective action online, was in every respect a work of net.art, Antimafia, read in that light, failed miserably; if it is re-read as Software Art, instead, it hits the mark splendidly, showing that “the code is not harmless” and revealing the weak point of activism that withdraws when it discovers that it can be really dangerous.

If Antimafia is a subversive interface disguised as commercial software, emulating the “packaging” of famous security software, most Software Art projects make the interface the object of subversion. This is an attitude inherited from the first net.art. from JoDi which tears the browser to pieces in controversy with corporative hi-tech. The premise is that standard interfaces convey a specific ideology, and that defacing, violating, reconstructing them in new forms can be a form of re-appropriation and liberation. I/O/D’s motto, “software is mind control, get some” very well explains both Peter Luining and Italian K Hello’s formal games as absolutely harmless conceptual experiments in practice, yet capable of pulling down in a moment the castle of metaphors on which the graphic interface with windows is based. In the same way Scream by Amy Alexander manages at last to give us the satisfaction of a physical outlet (in this case, a scream) that can produce immediate repercussions on the stability of the interface.

Others contest the surface, the froth of the data, like Slavic Marketa Bankova with Scribble, software that superimposes “graffiti” to the CNN homepage, with
the same pleasure as a child destroying the Lego castle he has just built. This is the case of Super Mario Movie, where Cory Arcangel breaks the world of
Super Mario into pieces and follows its fall with satisfaction, turning the horizontal flow into an endless vertical collapse, and depriving the game of
any possible interaction. A subtle subversion, that disguises itself behind the pleasure of fruition but isn’t less radical for that. Finally, entirely focused on language is the operation carried out by ][MEZ][, one of the best heirs of the
code poetry tradition. For ][MEZ][ language, even the usually immediate language of a blog is a programming code that can be disassembled and reconstructed, being aware that if the Net has something to share with Babel, this is the confusion of languages. For this reason her “mezangelle”, an idiom that merges natural language with IT code, becomes part, on one side, of the great tradition of language experimentation going from Dante to Joyce, and, on the other side, picks up a great lesson from Dada and Surrealism, i.e:
discussing a society means firstly to attack its logical and rational structure, exactly embodied by the language.

[1] “…software art has the potential to make us aware that digital code is not harmless, that it is not restricted to simulations of other tools, and that is itself a ground for creative practice.” In F. Cramer, U. Gabriel, J.F. Simon Jr., “Jury Statement”, 2001, reperibile online all’indirizzo

[2] “… software art could be generally defined as an art: – of which the material is formal instruction code, and/or – which addresses cultural concepts of software…” In Cramer, Florian, “Concepts, Notations, Software, Art”, 23 marzo 2003, reperibile online all’indirizzo