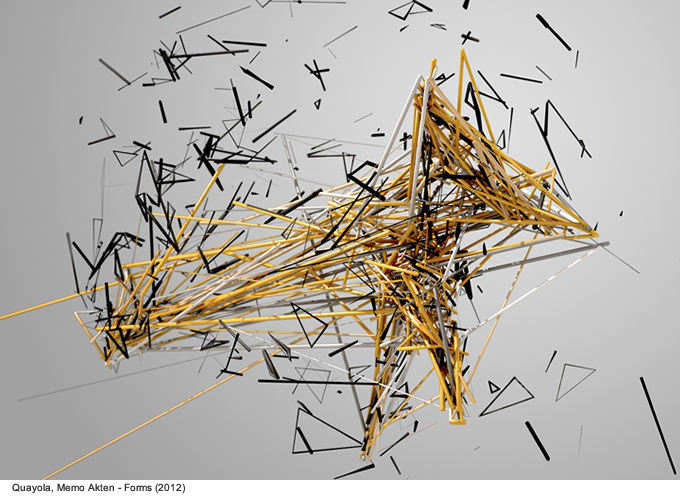 When does the electronic arts, beyond the beautiful formal and medial research, tell us something about life?

Quayola is an Italian visual artist based in London. An old friend of Digicult. He investigates, through digital artifacts and audio-visual installations, the tensions and balances between the real and the artificial, figurative and abstract, artefact and nature, between the great iconographic traditions and aesthetics of the digital age. The work by Davide has always been important for the formal accuracy, and a level of expressive coherence able to manipulate, matter how elusive, those categories represented by beauty and wonder.

Memo Akten is a Turkish born London based visual artist as well, but also a musician and engineer who works in that consistent intersection between art and science disciplines. His work covers a range of practices including installation, performance, film, music videos, web based artworks and apps, more recently. His work focuses on the creation of strong emotional and evocative experiences, starting from the analytic search of logical regulatory phenomena, even before the observation of the phenomena themselves, to give form to the invisible: “My biggest inspiration is nature , and try to understand the nature of the nature, of science.”

A couple of weeks ago, with the series Form togheter they won the Golden Nica at Prix Ars Electronica 2013 in the Computer Animation / Film / VFX category (http://www.aec.at/prix/en/gewinner/#computeranimation). In this work the two artists analyze the movement of the human body, a fascinating investigation on the body itself as a machine and system, bystander in time and space. The work starts from an archive source, videos of the Commonwealth Games (footage of high jump, swimming competitions…), and stands as one of the most precious works of genuine investigation into the essence of the body designed through contemporary electronic languages​​. From this, Akten and Quayola generated 3D shapes in motion on the same trajectories of the body of the athletes, an abstract system in which movement fluency, as well as the tension of the muscles, becomes well-rendered. In their work the medium itself becomes body, a viable system of movements and resistance, breaths and potentiality. No clean electronics nor abstract self-referentiality, no interactivity at all costs, simply organism.

Together with them, let’s try to understand how much has been done to get this far.

Pasquale Napolitano: The warmest congratulations for Ars Electronica Prix well-deserved reword. The greatness of your work can be interpreted on several levels, but in my opinion is the relationship that succeeded in establishing between big iconography (“grand narratives”) and digital aesthetics. I think of the series “Strata” and “Partiture” by Davide or “Reincarnation” by Memo, which, reconfiguring the iconographic images from the great tradition with a digital approach, present themselves as aesthetic and theoretical bases of “Forms”. What do you think is the peculiar force of this work?

Quayola and Memo Akten: We both like positioning ourselves right on the border between abstract and figurative. A lot of our previous projects, including the ones you mentioned, do exactly that, they lie right at the edge of recognizability. Forms carries on that approach, but beside the actual techniques and process, what we found very fascinating about this project is the actual subject and its de-contextualisation. Sport is one of the main forms of entertainment in our contemporary society – In this project we shifted the attention from the athlete’s aim of winning, to the actual mechanics of his body. We are fascinated by the observation and study of  the invisible.

Pasquale Napolitano: The evolution of your work reminds me of the words of Marshall McLuhan: “The identity of the medium whereby all media products are like prosthesis of our unique medium: the body”. Do you think you’re going to the essence of the medium with Forms?

Quayola and Memo Akten: We are both incredibly fascinated by the body in motion and in general by nature and its complexities. However in this project we are not only exploring the purity of the body in motion,  but we are also re-thinking and questioning our common perception of  iconic moments from our contemporary culture. 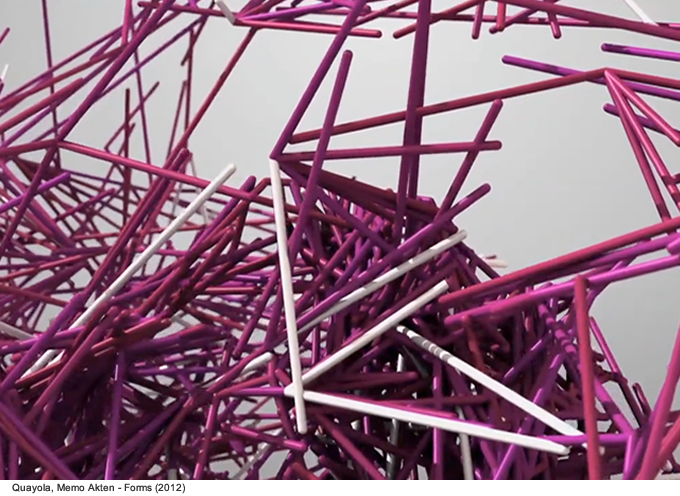 Pasquale Napolitano: In contemporary Media Art teamwork is essential and authorship is, in a sense, a recognized value. Wanting to ideally “debunk” your work flow, how does the your creative and productive relationship runs? Who are the other professional people that enter the field, and how they partake in the creative process?

Quayola and Memo Akten: We actually believe that authorship is a very important aspect, especially in relation to how a  coherent research is brought forward not only through a single project, but through years of research in a given direction. The themes explored in this project are something that both of us were very interested in and somehow been independently exploring in the past (Memo’s Reincarnation / Quayola’s Natures). Prior to Forms, we’d been having casual conversations for years, and interestingly found that despite our individual work having quite different output and  aesthetic to one another, our processes, inspirations and motivations were very similar. Forms is therefore a natural progression and convergence of both our researches on many different levels. The authorship in this project is shared, but certainly there and coherently connected to our previous works.

Working with a team is quite common and almost essential in order to develop complex projects. The team and roles in Forms were somehow similar to a traditional CG pipeline, with both of us working as directors. However the actual process behind the production was radically different than traditional cg animation. Animation is generally approached with a script & storyboard methodology, where most of it is designed at the start and developed linearly. We like to take a different approach. Instead of directly designing the final outcome, we like to design interactive systems, based on simulations and real world phenomena combined with bespoke artistic constraints and rules we introduce for finer control. Through designing and developing these rules, and defining these parameters we sculpt the final outcome. In this process there’s something quite similar to documentary making: you know what you want the documentary to be about, you know the areas you want to explore and you have a rough idea of what you’re expecting; but you don’t know for sure exactly what will happen. As you start filming and collecting material, the pieces start coming together, you start forming a more concise idea of the final piece and start guiding it in that direction. 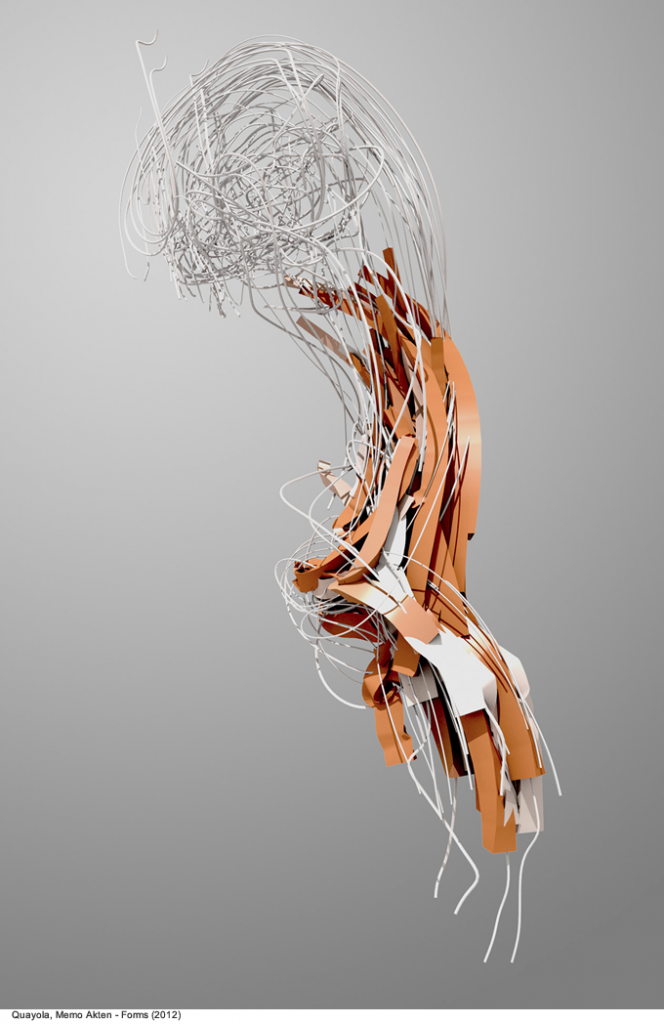 Pasquale Napolitano: In big data displaying artworks (Forms is based on a myriad of kinetic data provided by athletes bodies) translation (the work on the imaginary) between data and visual systems is basic. How does this relationship works and which role has the software system and sound in Forms?

Quayola and Memo Akten: This is in fact the part that most interests us. We are not straight data visualizers. Yes we start with data, but instead of showing the data untouched, raw, straight up; we add an artistic interpretation to it, we embellish it, we accentuate it, we look for hidden relationships and qualities and amplify them. We’re not looking for quantitative relationships and interpretations, but qualitative. I tend to liken this to classical painting. You can paint exactly what you see, looking for a photo-realistic interpretation (which in itself requires an incredible skill); or you can paint what only “you” see, adding a personal vision, creating something perhaps a little more abstract, more subjective. In both cases the painter starts with the same “data”, the data is the input to their eyes, it’s what they see. The photo-realistic painter replicates the data faithfully. The abstract painter uses the data to build on and create something personal. It’s the exact same concept in our case. The only difference is that our data isn’t just what we see with our own eyes, it’s one layer down, it’s the processes that drive what we see.

Software is crucial in our work. As a species we’ve reached a point where the basis of our understanding of the world around us is not based on our senses anymore, but our instruments. We’ve realized that our senses give us only a tiny fraction of what is really out there. In the not so distant past, we only had our senses to look at and understand the world. As science and technology developed we started to invent tools and instruments to physically augment our senses, e.g. see further (telescopes) or smaller (microscopes). Now we aren’t even just physically augmenting our senses: we’re building whole new senses: in fact, we’re using electrons instead of photons to see in order to detect electromagnetic radiation radically outside our visible range.

Our brains aren’t evolved to deal with this data. They’re absolutely fantastic, far superior to any computer + software to process *certain* types of input and processes, mainly those that we’ve evolved to depend upon, e.g. face recognition, spatial construction etc. But they give us a very limited picture, just enough for us to survive in the wild. We’re interested in the data that our brain can’t recognize and process directly, hence we need software to crunch that data, and present it to us in a form that we can recognize.

Pasquale Napolitano: How do you know each other? And will you continue partnering also after Forms?

Quayola and Memo Akten: We knew each other already from a while and now also share a studio, so we generally always very connected even on projects that we are doing independently. There are certainly many common interests, so for sure something else would eventually come out again at some point, we have already been discussing some ideas…