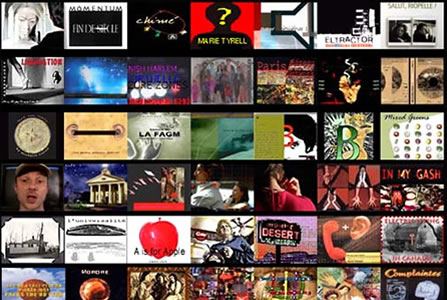 Agence Topo is proud to announce the release of POST-AUDIO_DVD project, a  2-DVDs compilation of audiovisual projects created by Montreal-based artists and featuring over 150 minutes of video. It is a testimony to a bourgeoning practice that combines sound and moving images, as well as a panorama by presenting a variety of artistic approaches that bear the singular stamp of  their creators.

The DVD_01 consists of a selection of works by Daniel Olson , Pascal Grandmaison and Herri Kopter (Jérôme Minière), Gennaro De Pasquale and JSR ; artists from a variety of backgrounds whose practices range from performance, video art, photography, new media and sound creation.

The DVD_02 features 5mm , an audiovisual work by Gabriel Coutu-Dumont and  Marc Leclair . Originally, Marc Leclair composed and released his musical  work titled musique pour 3 femmes enceintes on the Mutek_Rec label. The meeting with Gabriel Coutu-Dumont led to the development of this project in a new form which brings live video and sound performance together. 5mm , the  title of this collaborative project, is also the size of an embryo when it begins to take on its first recognizable human form.

The works featured on the DVDs and selected by Gennaro De Pasquale are primarily the fruit of collaborations between visual and/or media artists and electronic musicians. This ensemble also bears witness to the rich Montreal context at the beginning of the 21st century.The Post-Audio_DVD is an extension of the installation Post-Audio Esthetic, presented at Galerie Clark in Montreal (2000), as well as the online project Post-Audio NetLab (2004), two projects that focused on the mutating spaces of the musical object and sound.

The release of this DVD happens simultaneously with the presentation of at the 2006 Mutek Festival; an important exhibition of video artists Pascal Grandmaison at Musée d’art contemporain de Montréal, as well as an exhibition by artist Daniel Olson at gallery Optica (Montreal)

Agence TOPO is an artist-run center dedicated to the production, dissemination and ditribution of independant multimedia works.