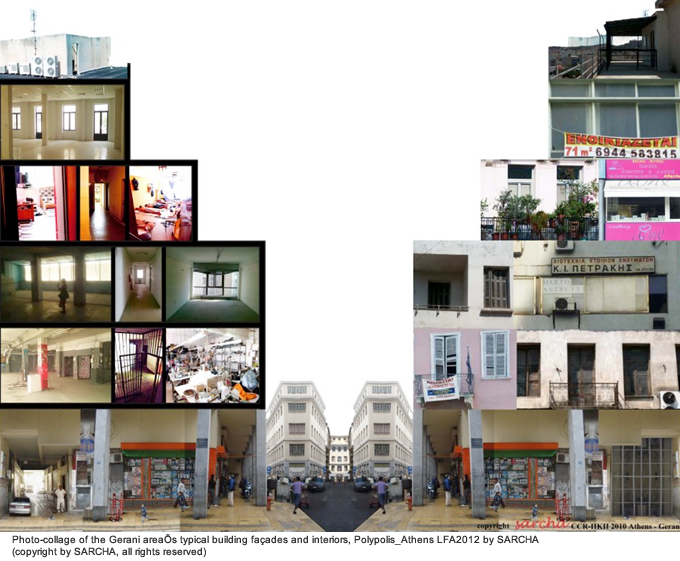 Polypolis_Athens LFA2012 by School of ARCHitecture for All (SARCHA) was part of the British Council’s International Architecture and Design Showcase 2012, as the official participation of Greece in the London Festival of Architecture, Cultural Olympiad, London 2012, and was realised under the auspices of the Embassy of Greece in London.

SARCHA’s Polypolis_Athens LFA2012 was one of the international events that marked the inauguration of the Festival. The Festival accomplished a city-wide celebration of architecture and architectural talent in the UK capital, by bringing architects and communities together to examine how we make London a better place. “The Playful City” was the theme Festival responding to the presence of the Olympic and Paralympic Games in London. The London Festival of Architecture 2012 was organised by the Architecture Foundation, British Council, NLA and RIBA London. Polypolis_Athens LFA2012 took place the last 23 June 2012 at Jeremy Bentham Room, Main Quadrangle, University College London.

School of ARCHitecture for All not-for-profit was founded in Athens during 2006. As an expanding open structure with currently 218 associates from various backgrounds and different countries, SARCHA has initiated international research programs which contributed to systematising city problems such as, the potential of the ‘un-built’ condition and its relation to the category of the ‘public’, the impact of immigration onto the city, the rethinking of the city as a pool of resources to be administered ‘in common’, and the city of Athens as experienced by its youth.

The significance of SARCHA‘s work has been internationally acknowledged in many occasions, including its shortlisting at “The Resourceful Architect” competition (the Royal Society of Arts, and the Architecture Foundation, London 2011). The current work on Polypolis uses a social board-game that reverses the logic of “Monopoly” of ‘one winner takes all’, adapts it specifically to the complex issues facing contemporary cities and experiments with different ways in which the common resources of the city can be held and mobilised in common by its inhabitants. 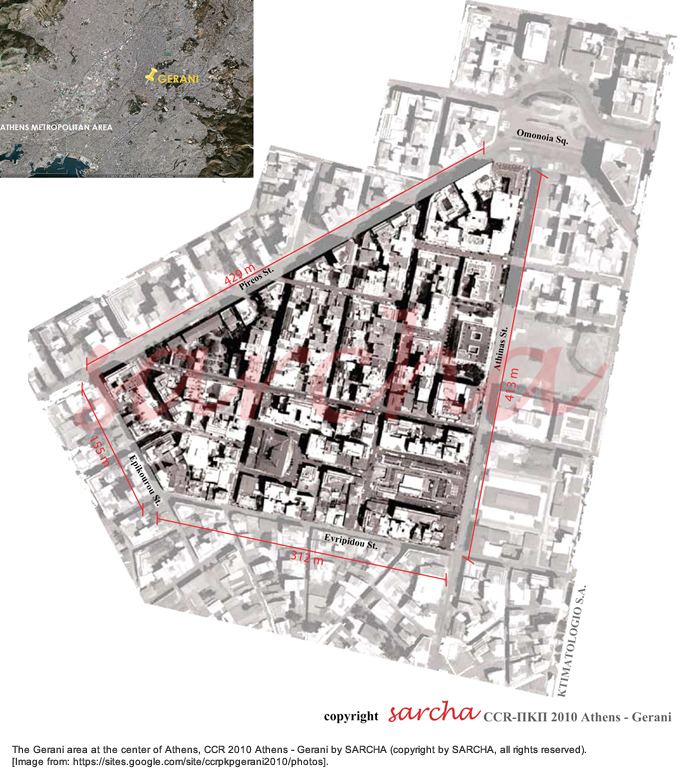 The Polypolis game was initially conceived as a testing ground for SARCHA’s CCR: CityCommonResource (2010-2011) research theme and the CCR Athens Gerani 2010 pilot study. The focal point of the study has been the Gerani neighbourhood, one of the most rundown areas in Central Athens, contained between Omonoia Square and Athinas, Euripidous, Epikourou and Peraios streets. SARCHA considered the current Gerani condition – commonly considered a dead-end – as an opportunity to re-think architecture’s relation to the economy.

In the course of researching the area, one comes across countless and diverse layers of transformation building up the richness and complexity of the city centre. We have the 60s Gerani’s flourishing as a workshop, manufacture and print hub with various stores, coffee-shops, solicitors offices and middle-class accommodation; the 70s frenzy of services accumulation and the ad-hoc development of multi-storey offices and hotels carelessly causing the irreversible destruction and disappearance of the old city fabric, history, natural terrain characteristics (natural springs and ancient wells) and climate; the increasing and overwhelming flows of foreign immigrants since the 90s. 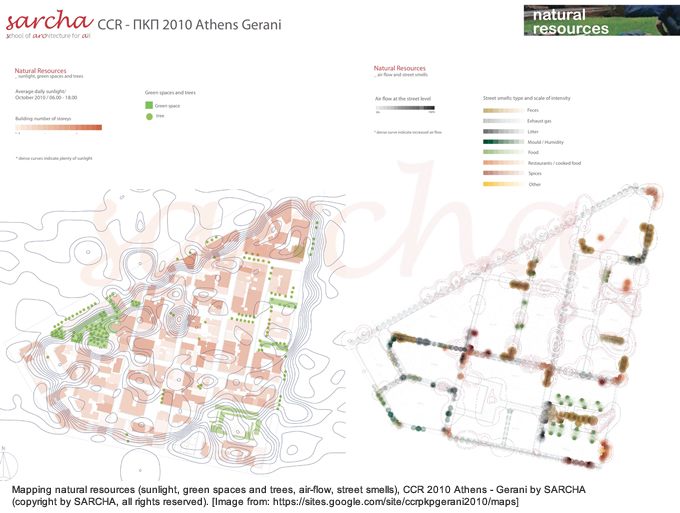 The SARCHA research team had been systematically and tirelessly mapping all the human, physical and natural resources of Gerani from July to November 2010, with the aim to visually ‘track’ and analyse the urban distribution of city-resources. The team managed to collect a variety of detailed data on people, activities, buildings, un-built spaces, the area’s smells, natural ventilation and sunlight conditions. Most importantly, SARCHA succeeded in surpassing the limitations of simply combining the methodologies used in social sciences, urban geography and design, because data was categorised and described according to the ten Aristotelian categories: Substance – Quantity – Quality – Relation – Place – Time – Position –State – Action – Affection. Such a methodological strategy proved to be particularly innovative and suitable for mapping the fluidity and complexities of Gerani. Polypolis_Athens LFA2012 was based on the CCR Athens Gerani research, findings and visual material.

The next step has been the creation of a “Resources Reset Proposal” for recombining the area’s architectural resources, human potential and manufacturing tradition with innovation. To this end, SARCHA proposes the administration of resources ‘in common’ and puts forward the appropriate tools for enabling the active involvement of not only owners but also inhabitants. The Gerani area is separated in the three layers, the development of which, would take the following form: Layer 1- upper floors/rooftops to host rooftop city-allotments (agro-Gerani) and housing; Layer 2- middle upper floors to be developed as innovative small-scale manufacturing hubs with education, training, production and services facilities; Layer 3- ground floor/ street level to host welcome/information desks and market places.

Polypolis_Athens LFA2012 was based on the CCR research, analyses, visual mappings and expanded the Resources Reset Proposal further through the active participation and intervention of experts, players and a wider audience. In the rapidly deteriorating Athens centre, players are assigned life-roles. Immersed in an urban environment of economic recession and its impact, the Athenians (Greeks and immigrants, shop owners, unemployed, land owners, investors, inhabitants, entrepreneurs, intellectuals, etc.) enter into an agonising and agonistic struggle to reset the city’s human, physical and natural resources.

The players keep reflecting and acting upon real city conditions, developing and negotiating their proposed set of city-intervention, watching the outcome and impact of their decisions unfolding on the ‘game-board’. The Athenians of the Polypolis social game stand up to the challenge of the crisis and have the power to transform their city. The key success of the game is that it reverses “Monopoly”, as it entails negotiations among groups of players with the aim to resolve complex issues related to the various resources of each building section. As in real life, the city-resources are unequally distributed among the players when the game commences. The target is for the players to explore the potential of the ‘in common’ administration of human, natural and physical resources, by continually renegotiating attachments among themselves, as well as the materiality and complexity of city-layers. Fast-track success is discarded in favour of the necessary resources resetting through the players’ continuous re-association. The game offers an intense embodied and emotional reflection on the current city conditions in Athens and beyond. 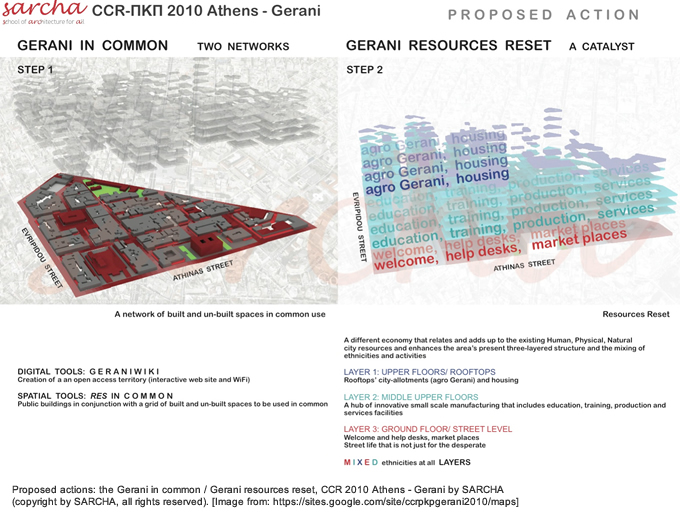 The usual game-board is substituted with a typical building-block section of the area drawn onto the floor, so that players can step in their chosen ‘cells’ and become ‘immersed’ in the game context. The game commences with the Athens Mayor’s and SARCHA’s introduction to the real-life framework of the game, presenting the main vision and the city problems to be resolved. The relevant videos are projected, showing an interview of an inhabitant and other audiovisual material related to the particular section chosen by the players. The City-guardians play a catalytic role throughout the game. They are experts from political theory, architecture, economy and law backgrounds who provide support, guidance and evaluation of processes and outcomes at each stage of the game.

The players apply intervention tools for planning their course of action with the aim to tackle the problems related to their chosen city-layer. For instance, the relevant actions may include creating green adaptable architecture, traffic and noise control, training job-seekers, sharing resources and knowledge.  The game enables all groups of players to collaborate for fine-tuning their strategy, formulating their vision and adapting it in relation to the City-guardians and Observers’ feedback. Contrary to other games, the audience does not have a passive role but actively observes the course of the game and provides feedback at various stages. The winning group receives their Trophy for creating the best proposal. The winners demonstrated the ability to resolve problems in innovative ways through discussion, negotiation and collaboration enabling the involvement of all other groups; managed the city resourcefully for creating an appropriate and feasible proposal to tackle complex problems and contribute to the development of the Gerani area. 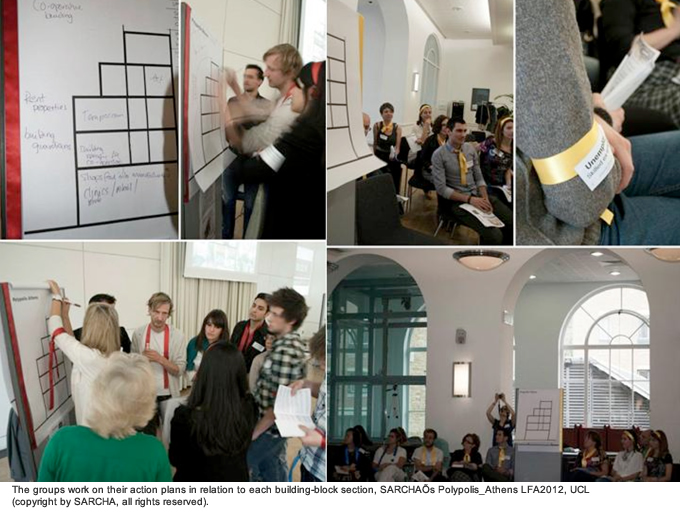 As the current economic crisis hits a number of European countries, Polypolis has taken a life of its own. The game uses a playful manner to train and enable city inhabitants to collaboratively cope with issues affecting their lives. SARCHA’s local adaptations of Polypolis have been particularly significant and successful, including those that took place  in Athens, Rome and Thessaloniki The Polypolis presentations and game testing included Polypolis_Gerani, with the Mayor of Athens in the role of the Polypolis_Gerani Mayor (Youth in Action EU program, Athens, Greece, 9 June, 2012). Creatively and responsibly improvising against the odds and indifference; transforming necessity into opportunity; the game formed the means for communicating to a wider audience the city conditions in Athens and inviting people to get involved in confronting the effects of the crisis, setting deep foundations for a promising future.