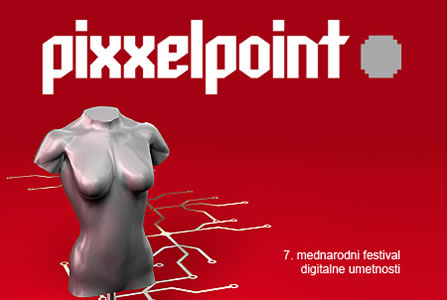 The International Digital Art Festival  Pixxelpoint is one of the most successful and renowned festivals of digital art in Slovenia and also abroad. Its purpose is firstly, to bring the information technology and digital art closer to the general public, and secondly, to raise awareness about a different potential to use computer among the young.

In previous editions the festival had a big media response and over 3000 visitors visited it every year, so this is a challenge for the organizers to further expand it and trespass the boundaries of the gallery space which has become too small for all the projects which are to be carried out.

The exhibition of digital projects, as the central event of the festival will be mounted at City Gallery Nova Gorica but will include also other locations (Mostovna, Kulturni dom Gorica (Italy) and DAMS (Italy)), besides we will also include a symposium on the given topic, as well as workshops run by guest-lecturers. Accompanying activities will include numerous concerts by well-known music performers.

The new millennium has been characterized by the domination of media technology in which external image and identity are no longer determined by class and gender. More than ever before, image and identity have entered the domain of creativity and free choice. At this festival, we will present work that deals with the formal, aesthetic and socio-cultural aspects of the digital media and will critically debate key events at the intersection of fashion and new media technology.

The selected media artworks have been chosen less for technological innovation than for what they say about the formulation of aesthetic methods of expression and about the wider field of art, and for what they articulate about the changing relations between people, appearances and media.

We hope that the artists will understand this presentation of fashion and media technology and take it with a good measure of political and historical consciousness: in other words, with both a critical stance toward the socio-cultural meaning of dressing and with an awareness of the artistic and technological avant-garde