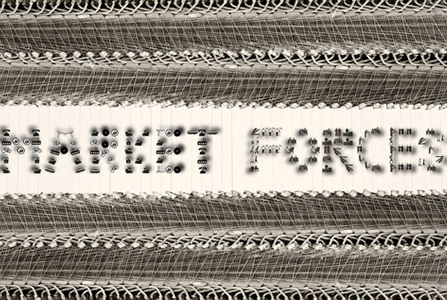 Celebrating the Fifth Piemonte Share Festival, directed by Simona Lodi and Chiara Garibaldi. In this year of worldwide financial crisis, the theme chosen for the Festival will not fail to attract attention for its capacity to read and in a way anticipate the profound impulses and movements that bring contemporary reality to life. Market Forces has been in the air for some time.

From complexity theory to squatting supermarkets, the Fifth Piemonte Share Festival will be giving shape to the myriad forms of chaos, with installations, exhibitions, performances, debates and, of course, the much-awaited awarding of the Share Prize. Building on ManuFacturing, the topic of the 2008 Festival, complexity was the starting point for organising this year’s Festival. How do you live in an unstable reality where the unexpected plays such a fundamental role? How can we think about a future which can no longer be imagined in a linear way, where complexity would appear to be the only approach left to us?

The answer from Andy Cameron, guest curator and chairman of the judging panel for Share Prize 2009, is the market. The market is a mechanism for dealing with the complexity of the future and the unpredictable; it is an ecosystem. The successful and highly topical outcome of these considerations is Market Forces. This is the topic which artists, intellectuals, curators and the public are being called to reflect upon this year.

The vast programme, scheduled to unfold over six days from 3rd to 8th November, highlights the Festival’s capacity to build networks and co-operates with the local territory, to establish a dialogue with a broad variety of subjects and absorb new stimuli. Share Festival will be opened on 3rd November at 6.30 PM at the Museum of Natural Science. To celebrate, at 8 PM a special performance by the Orchestra Meccanica Marinetti (OMM), playing live Nag Hammâdi. Taking inspiration from the eponymous gospels, the thirteen papyri discovered in Egypt in 1945 containing pagan and Gnostic texts written in Coptic, the performance by Angelo Comino a.k.a. Motor, inventor of the OMM, explores the ties linking technology, science and Gnosticism. OMM is also the first success of Action Sharing, involving the co-operation of the Polytechnic and the Chamber of Commerce of Turin. 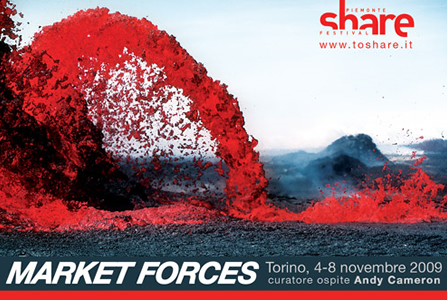 Share Festival will be presenting the thematic exhibition “Market Forces”, curated by Simona Lodi, offering an international stage to twenty artists from around the world, who with an ironic, irreverent, playful and critical spirit have explored our relationship with shopping, goods and places of consumption.

Share Festival has invested in the special project “squatting superMarket”, a radical version of the market place and points of sale, presented in augmented reality. Finally, Share Festival will be focusing on critical reflection through its conferences and debates, and the exhibition “until the end oF cineMa”, curated by Luca Barbeni, taking viewers on a critical journey through the various types of audio-visual content available on the Internet. Opening also to the art gallery of the city, presenting for the first time in Italy Erik Natzke’s works at the Galleria Allegretti Contemporanea.

Share Festival has also unveiled a completely new website to keep in touch with the public. Representing a true editorial work in its own right, and completely restructured in terms of its architecture and graphic interface, the new website hosts a multiple-author reblogger platform.

Digital Orbit Night is reserved to the italian premiere of the international collective for synesthetic media OPTOFONICA, created by Maurizio Martinucci aka Tez. Featuring Tez, Martis Fennis and Evelina Domnitch+Dmitry Gelfand, with the project “10000 peacock Feathers in FoaMing acid”.