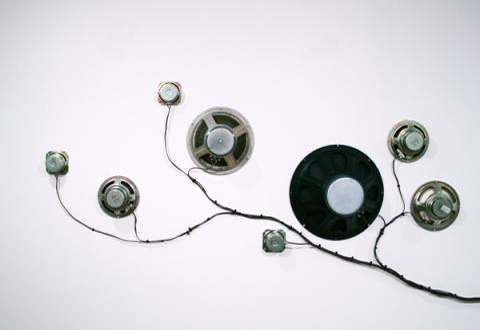 Phillip Stearns creates at the intersection of art, philosophy, and science, drawing upon a variety of disciplines including installation, audio-video, circuit sculpture, writing, performance art and musical composition.

Deconstruction, dissection, and reconfiguration are methods he commonly employs in the interrogation of materials ranging from electronic objects, biological systems, images, light, video, and sound. His process is that of reduction aimed at revealing hidden macrocosms of potential, new materials for expression, and new paths for inquiries into understanding the state of things.

In his work with technology, the machine is understood as the living manifestation of human intentions where the development and application of our technologies, machines and tools reveals our desires and dreams—both conscious and unconscious. His work generates phenomenological experiences that become pathways for interconnecting metaphorical spaces implied in the selection of specific materials, processes and media. 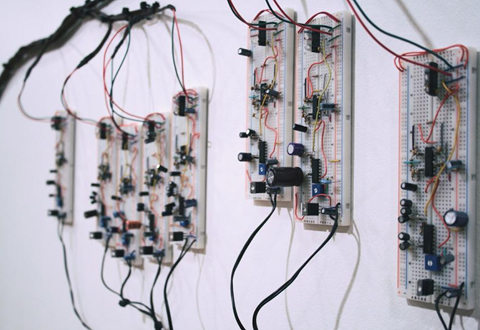 When the circuit is exposed, electronic technologies can take on an organic appearance. In my work with sculptural electronics, the components become crystalline lattices, skeletal structures, with wires functioning as any blood vessel or nerve bundle would. By making electronics physical, I invert the paradigm of miniaturization which constantly seeks to embed ever powerful computational devices in increasingly smaller spaces, choosing to explode the physical attributes of the circuits to give them a bodily presence.

Under the banner of a “smarter world”, we are inundating ourselves with objects whose functionality forms a dynamic interrelationship of dependence. The devices are not yet autonomous, to be so would mean that they are able to re-program themselves. What this means is that the behaviour of the electronics is to an extent pre-determined, not by some heartless machine, but by a group of humans (hopefully not heartless ones). We cannot help but embed our value systems and biases into the devices we build.

It is not necessary to accommodate every way of thinking, nor is it very useful to create the ultimate swiss army knife, to do so creates unwieldy and ultimately useless tools. However, it is important to understand that a device can shape our thoughts, that we take on the same thinking that went into the making of the device each time we use it. They have their own internal logic, and we must conform to the functioning of that logic to gain access to the intended utility. In my work with electronics, I have not built devices to be used, but experienced. They have their own internal logic, but it is not necessary to access it. There are deeper metaphors embedded within the design of some of my works, however, this should come secondary to the experience. It is there that the meanings can be strung together, without a deep understanding of what is going on and how it is happening.