Notes On Performative Language And Synchronicity 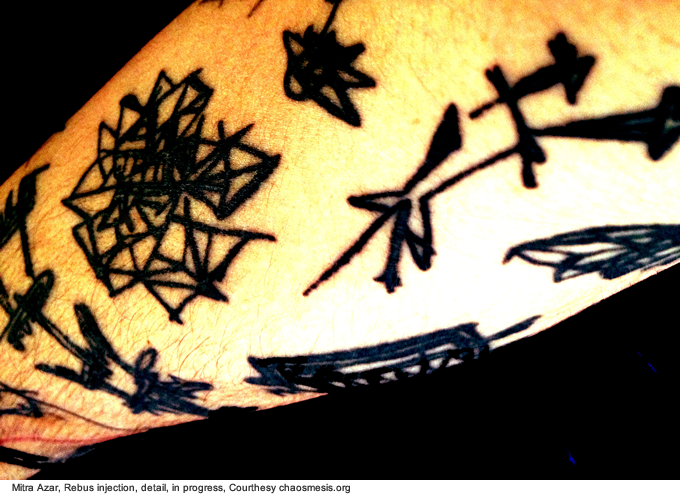 In this short essay I would like to expose some thoughts arisen during my practice of online writing in some of the most usual virtual spaces of the Net, such as Facebook and Skype, among others.

The prophecy of Marshall McLuhan – stating that with the advent of new electric technologies, writing would have left space to a growing visual culture and its closely related practices – appears to be made more complex by the fact that today, in the online-era as a further step towards the electronic age, we actually write more than ever. In fact, we could say that we have never written so much since the birth of the so-called Gutenberg Galaxy. Despite the context of clear preponderance of images on words, it seems that words have been able to find their own forms of resistance.

On a closer look, the word to which McLuhan refers in his prophecy is still linked to manuscript writing, i.e. an amanuensis practice related to Ars Memoria and scribal culture. In this sense in his The Gutenberg Galaxy (1962) – despite the awareness of how a new medium affects the previous ones, in some way re-shaping them – , McLuhan cannot foresee the ability of writing to pervade the folds of the electronic (and later virtual) world, and to compete with the more straightforward practices typical of oral and tribal cultures, and of the global village. Thus, how has online writing changed, compared to its analogic relative?

In the electronic age, as well as in the Internet era, instantaneity is more important than memory – now externalized, prostheticized – and the result of instant interplay of cause and effect shifts the focus on the nearly simultaneous interaction of communication at the expense of the sequentiality of language/alphabetic expression, often grossly delayed in relation to the dromology in Virilio’s work Speed and Politics (1977). Recently, when writing by hand, I noticed that I tend to overlap letters, as if the synchronous speed of thought crossed over the alphabet’s sequentiality, putting up resistance against it. Similarly, even now, while I’m typing these lines on the keyboard, I’m working simultaneously on different fragments of text, rather than aligning them in a sequential order. 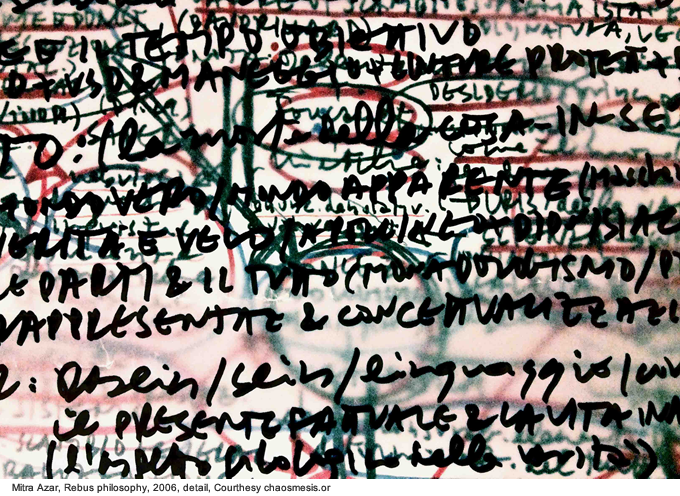 Synchronicity of communication has probably much to do with the performative experience of writing and with the instant of sequential: if we think of linguistic exchanges typical of a bidirectional Skype chat (between two speakers), we often notice two streams of consciousness that intersect each other in a synchronous way, rather than a sequential transmission: my writing proceeds independently to my partner’s, and I often have to go back to the chat in order to find the answer, coherently interacting in turn to restore a fictitious sequentiality that, nevertheless, allows a non completely schizoid chat. If the writing practice of Skype were translated identically to itself in the real world, we would have two voices constantly overlapping each other, without listening or remembering the logical connections to move the conversation from A to B in a linear way. Yet, even in conventional oral communication, I think it’s a generational fact becoming aware of different communication themes overlapping continuously, almost replicating the simultaneous fruition of a variety of contents typical of the Internet. The Facebook timeline in two columns, compared with its previous vertical structure, also moves in this direction, and indeed helps the eye get accustomed to simultaneous reading, both vertically and horizontally, in a more intensive way than on other websites.

In this direction, in both Skype and Facebook chats, not only interaction, but also the internal syntactic of linguistic composition tries to adapt to the logic of synchronicity and real-time, far away from those of the sequential, slow, mnemonic scribal word, about which McLuhan talks. A diminutive, cut-off word emerges, seeking to reduce both verbalization and draft times, in the pursuit of the instant of spoken word, performed in a real space between two physically and semantically close parties.

We may say that the gap between oral and written forms has shrunk online from a syntactic perspective but has broadened semantically. A virtual written word tries to become oral, regaining body and voice through a written style, a slang, the interaction between linguistic and non linguistic text, or, for instance, emoticons, or any other users’ inventions that have converted the combination of more letters in micro-images, trying somehow to incorporate the missing semantics.

I think it is therefore important to highlight the performative nature of virtual writing, in order to suggest the presence-absence of a semantic physicality as its distinctive aspect. Virtual writing recovers the uniqueness of performativity existing in the calligraphic elements of amanuensis writing in the form of a tension towards body and image. The corporeality of words emerges despite the immateriality of its practice and the resistance of its medium, in fact, almost as its enantiodromic form. This phenomenon is shown by the increasingly common sexed-up linguistic practices ongoing in the virtual exchange between lovers – or complete strangers – in Facebook posts or chats, to their culmination in Second Life, in which dedicated spaces, avatars, voices and alphabetic writing re-enact the imaginaries of sexual intercourse. In If on a winter’s night a traveler (1979), Calvino had already claimed the sexual nature of literature (and reading) which, to me, appears to clearly emerge in online writing, further confirming the performative nature of this practice, despite the McLuhanian coolness of the media involved. 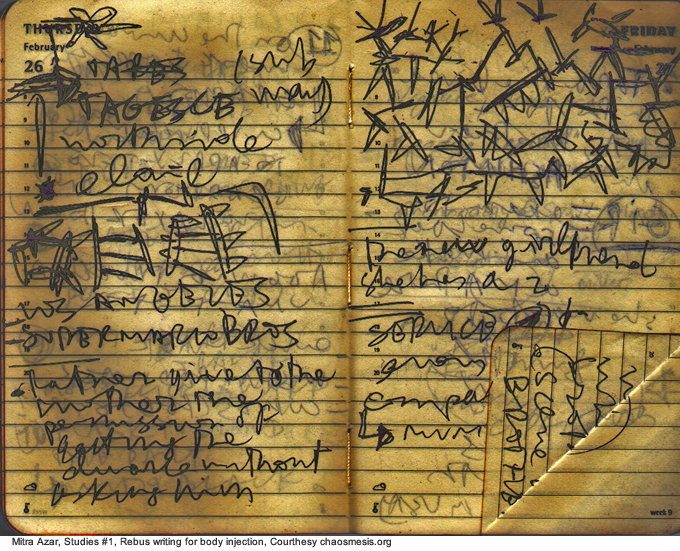 It must be understood, however, that in an almost chiasmatic process in which man becomes automated while machine becomes organical, the performativity of virtual writing is no longer strictly organic, but belongs to a new form of thinglike organicity beyond the animal-spiritual vitalisms typical of Western philosophical tradition (from Plato to Nietzsche), while being, conversely, more similar to the thing who feels as Mario Perniola defines it in his The Sex Appeal of the Inorganic (2004). A good example of this post-human linguistic organicism are genetic algorithms, in which both the mathematical schematic nature of writing and its opening to the world emerge – genetic algorithms are flexible algorithms that apply practices of random mixing of their own elements in their search for the utmost appropriate formulation of their own alphabetical heritage, following the responses they receive from the environment.

Let us consider now for a moment the basic T9 function on cell phones, through which automatic spelling correction of the text messages, while avoiding errors, prevents the use of any words not listed in the uploaded dictionaries included in the phone software, thus going towards the standardization of language and, in this sense, flattening the very performative nature of writing – acknowledged, nonetheless, by the new T9 systems in some of the smartphones currently on the market. For these systems, the strictly digital practice of text writing does not proceed step by step anymore – the finger sequentially touching real keys on a keyboard, composing a text – but line by line – the finger sliding on a virtual keyboard, composing a weaving of lines that the software is able to simplify in points, choosing those letters the finger selects. Even access passwords to generic portable digital systems are increasingly less digital, while becoming increasingly more layouts of lines that the owner alone knows and is able to replicate – a phenomenon that shows the shift from an alphabetical practice to a visual one, also evident in the beautiful RSA feeds, in which professorial lectures on various topics are converted to linguistic-visual animated patterns.

In this perspective, we should then acknowledge that schematization and ossification of writing are not incompatible with its performative side. Language tends towards mapping and, with it, to image, and, in so doing, it tends to erode its own sequential origin: “il faut briser le langage pour toucher la vie” (we must break language in order to touch life), Antonin Artaud was used to say. Inevitably, the ongoing processes of linguistic transformation on virtual platforms are an intermediate moment in a long-term process that will completely change human communication modes, and, retroactively, will also change our way of thinking, even beyond a linguistic perspective. 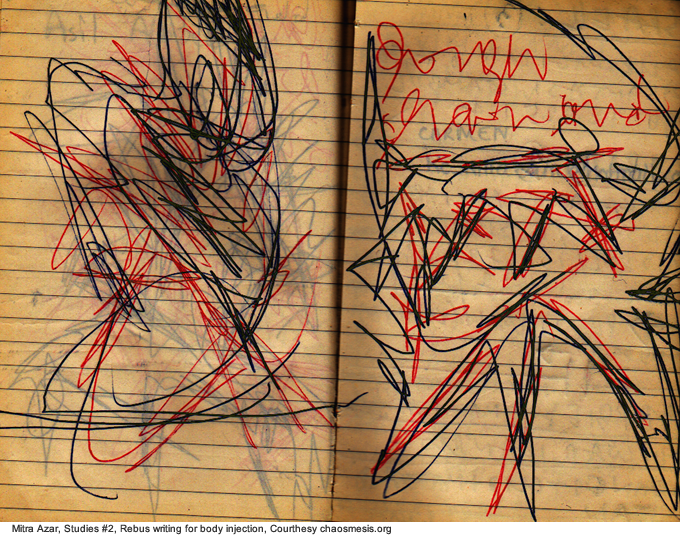 Multitasking is one of the factors that neurophenomenology should investigate to understand how much our way of composing thoughts is gradually becoming less unconsciously a-sequential, while ADHD (Attention-Deficit/Hyperactivity Disorder), instead of being considered a disorder to be treated with massive quantities of Ritalin, should rather be observed as the emerging phenomenon of a new way of thinking and interacting. We are the adaptive sensors of technology. The simultaneous fruition of multiple windows on a browsers, the synchronous communication on multiple chats, the fragmentation of subjectivity in multiple and partial virtual identities (email account, Facebook account, blog account, Skype account, etc.) is also manifested in a syncopated and intermittent writing, close to Bergson-Deleuze crystals of time, as an expression of swirls of present, past and future simultaneity, such as those that sometimes occur in the Skype chats mentioned above.

In relation to the images-cristals seen by Deleuze in the cinema of image-temps by Orson Welles, Alain Resnais, Jean-Luc Godard (to mention but a few) in his L’image-temps (1985), I would like to propose the idea of crystal-words, in which different temporalities coexist, while unsaid virtualities push on the digital–performative sense of words. It is apparent that a writing practice of this kind, pushed to its extreme limits, is closer to schizophrenic modes of expression or, using the definition of Felix Guattari in Chaosmose (1992), schizo-creative modes, closer to the unconscious’ behaviors. 20th-century literature has been experimenting quite a lot both with performative and unconscious styles of writing. Joyce and Ulysses (1922), with its streams of consciousness; Bukoswski and Post Office (1971), with its organic word; Foster Wallace and Infinite Jest (1996), with its obsessive-compilatory tendency typical of legal-informatic codes; DeLillo and The Body Artist (2001), with its attention to micro-perception, the tension of language towards the a-linguistic.

The interaction between language, image, unconscious (collective, photographic, technological), in relation to new media and the restructuring of subjectivities and temporalities they perform, drastically rephrases our communication tools. The Iconji – a logographic communication system – is an intermediate step towards new forms of the coalescence of image and language, though its rather rigid notational structure represents, in my opinion, a limit to other empathic-communicative forms of comprehension beyond the linguistic forms and those derived. While its pictographic matrix is nothing more than a replica of traditional hieroglyphic systems, the important and significant variation is its opening: alphabet itself is in progress, while virtual community adds linguistic units to suit its own new needs, in accordance with public defined criteria. 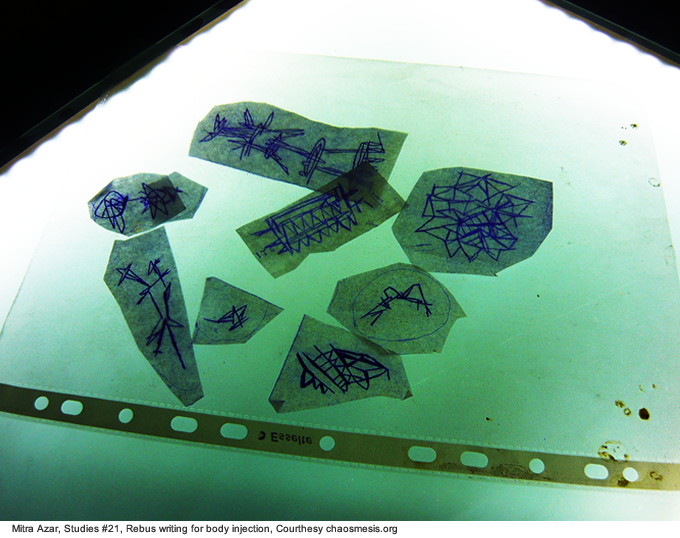 Without reaching to non-verbal communication hypotheses, based on acausal ESPs (Extrasensory Perceptions) close to Carl Gustav Jung’s Synchronicity (1952), for now, I would like to imagine a kind of intermediate rebus form, a place for converting the alphabetical sequentiality of language into the synchronicity of image elements – just like in rebus puzzles. There, we might develop new ways of communication, new perceptual abilities defining further communication mechanisms, far from the discreteness of alphabetical language, and yet, as accurate as them.