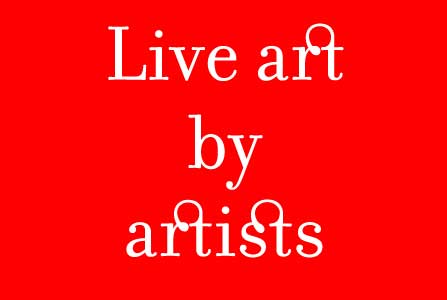 PERFORMA 07, the second visual art performance biennial, will take place this year from October 27 – November 20, 2007, in New York, with an expanded roster of consortium members, ten major new PERFORMA Commissions, a lively and event driven educational program, and a focus on several new themes, including the relationship between the avant-garde dance and art worlds, with visual art projects that include choreographic precepts as material for art.

An exciting four week program of performances, exhibitions, film, screenings, lectures and symposia, as well as PERFORMA Radio, PERFORMA 07 has been organized in collaboration with 30 leading cultural institutions and their curators across the city to provide audiences with an overview of contemporary visual art performance. With more than 90 participating artists, PERFORMA07 will articulate a broad range of ideas and sensibilities across disciplines and media.

Two years ago, PERFORMA established a new biennial for New York City. With its vast array of new performance by visual artists from around the world, it served to contextualize such cutting edge material and at the same time to build an exciting community of artists and audiences, and a strong basis for educational initiatives as well. The biennial underlined the important influence of artists performance in the history of twentieth century art, and its ongoing significance in the early years of the 21st.

Building on the important era of downtown New York of the Sixties and Seventies, when the area was a beacon for the newest developments in dance, film, music and visual arts, this second biennial re-imagines the past, with historical reconstructions such as Allan Kaprow’s legendary “18 Happenings in Six Parts” and also looks to the future, with its focus on new media and the infinite possibilities of generating new directions for the visual and performing arts of the new century.

PERFORMA proudly announces the expansion of its PERFORMA Commissions program, that originates new productions and supports artists in the development of their work, from concept to presentation. It also launches PERFORMA publications, with PERFORMA: New Visual Art Performance, a chronology and a record of PERFORMA 05, that is as much artists’ notebook as a new guide to cultural life in the city.

PERFORMA also hosts for the first time, with New York University, Performance Studies International, a four-day conference of keynote addresses, panels and workshops that offer an exciting opportunity to provide a critical and historical context for the new work presented during the biennial.