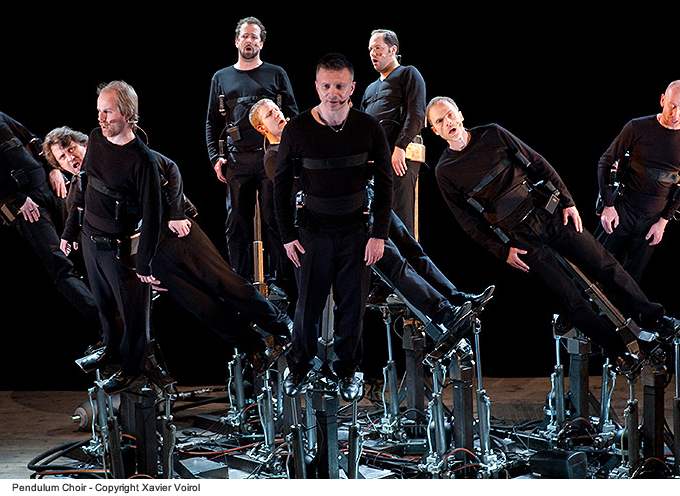 They are the winner of the section “Interactive art”, at the Prix Ars Electronica 2013, that taken place last 16th May in Linz, Austria (http://www.aec.at/prix/en/gewinner/#interactiveart): a deserved reward for André and Michel Décoster, which are working as Cod.Act since more than years, on the possible relations between sound, light and imagine (http://codact.ch/gb/pendugb.html).

They are two brothers that in the 1999 started to put together their different knowledge (Michel is an architect and plastician and Andrè is a musician, compositor and plastician) creating particular devices, functional and lean to specific artistic projects, through that they refer to a post-industrial imaginary. Their work is in the edge between installation and digital performance, and the interaction of the different elements is the starting point for the entire structural genesis. There is a technological and musical research where the human presence becomes the joining link and the last signifier agent.

Pendulum choir is the second project where the music opera is used like the row material from developing the original idea. They started this kind of research in the 2006 with Ex Pharao, a performative installation that moved up from the Schönberg “Moses and Aaron”: a re-writing of the original symphony taking place from the interaction of spectators that could modify the sound and all the dramaturgical parameters in real time. Each changing of such parameters controls the movement of a mechanical installation that becomes animated and moves itself thanks the different received input. Then the spectator turns to be an active subject of the work like a “composer” and a “choreographer” of the robotic machine’s movement.

Pendulum Choir carries on the research on the possible relation between the orchestral music and the movement, ever through the direct interaction of the human physical action and the answer from the robotic actor. 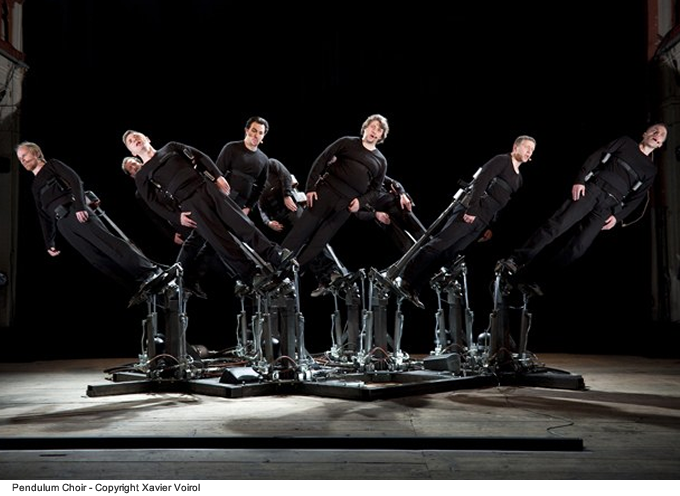 One of the most interesting aspects in the works of Cod.Act is that even if the use of technologies recovers an indisputable and basic importance, at the same time it never assumes a prevailing and centralizing presence. Their devices are at the core of the artistic process and for this reason they are not the last main objective: we can refer to a “subtle” use of the technologies, in the meaning of their invisible implementation manifesting itself through what is in relation with the users in the final stage.

The device continues to be an instrument, without the priority to be showed neither as a spectacular element neither as a bearer of an own pre-determinate meaning. The technology manifests itself just at the time that the audience keep the will and the possibility of interaction with the artwork, combining and organizing in their own way the information to send, under particular parameters.

“Random, ephemeral and multi-dimensional”: with this three adjectives André and Michel define their work that actually is something really fleeting despite the materiality of the machines and their post-human aesthetic. These machines then appear like artificial appendices moved by the one of the most organic thing as the human body is and, at the same time, by the digital technology. It goes to create a triple polarity that operates on different layers and finally gives to the works of Cod.Act a sort of last, ontological meaning.

Pendulum Choir is not about the interaction with the viewer, but its main object is in the creation of a live and osmotic structure, fixing nine performers to the robotic installation. Then they create only one body that comes to live thanks the vocal emission of the nine singers: a musical and visual unison, during that they challenge the gravity with a polyphony of the movement.

We interviewed Andrè and Michel trying to go deeply in the relationships that bring at the concept of the interactivity and how it is developed by them, like a central point of their works thanks to they won the prestigious prize.

Giulia Tonucci: Could you please introduce you and your work. How was born the project Pendulum Choir and how does it follow your previous works?

André and Michel Décoster: Our Cod.Act projects always associate movement and sound. They testify of our perpetual researches on the relationship between these two parameters and our endeavour to find the best relationship between them. In all our projects, we develop and build a machine which produces movements and sound. Usually these machines are operated by persons, either by the public or by us. An additional relationship appears then, one between man and the machine.

Pendulum Choir arose from our interest to realise a project on the theme of instrumental or vocal compositions and associate it to a machine, conceived and developed by us, to include the notion of movement. We wanted to establish a direct link between parameters of vocal music, such as the tone, the verbal material, the rhythm, the intensity, the density and mechanical parameters such as the speed, the position and the acceleration.

We also wanted to work on the direct effects produced by the movements and the positions of the singers on their voices; play on the constraints and the demands of the system. We wanted to provoke a natural relationship between movement and sound without an intermediate system of sensors and treatment of information. The themes of the vocal composition are breath and breathing. Throughout the performance the choir expresses different respiratory states, such as the breath of the ecstasy, respiratory oppression or the first breath. The movements of the machine place the singers in physical situations in connection with what they express vocally. 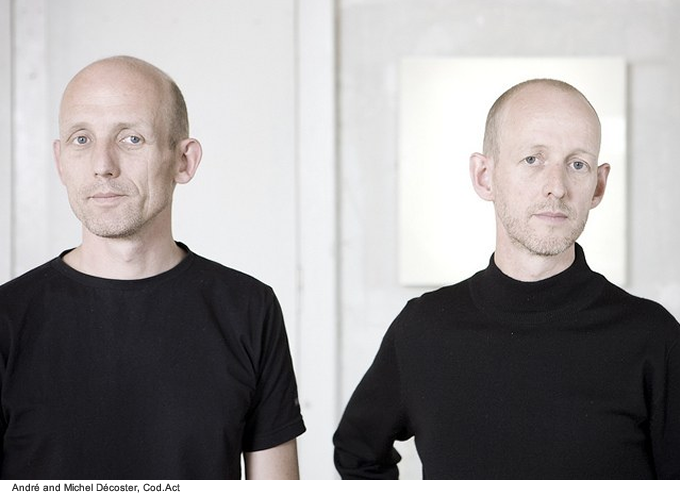 Giulia Tonucci: In your work it’s clear a strong connection with the design and the architecture, evident in Pendulum thanks to the incredible mechanical platform that is doubtless a performative element of the piece. How does this particular machine work? Is it for you just an artificial support or otherwise is like a live presence on stage?

André and Michel Décoster: The machinery of Pendulum Choir was developed as a tool to embody an idea which consisted in putting singers under physical constraints to obtain new tones. The shape arose from functional criteria. The choice of the technical devices and the materials was defined so as to be able to build the installation ourselves in our workshop. The only relationship with architecture and with design is the research for functionalities and for economy.

Giulia Tonucci: Looking at the piece, the feeling is like to assist at the manifestation of a sort of what we can named “corpo sonoro” (sonic body). Do you think we can talk about the creation of a “sonic body” that consists of the human bodies over the mechanical arms, the technological devices that connect each others and, above all, it is perceived from the ways that they interact together, creating only one performing final result?

André and Michel Décoster: Yes. Our idea is to consider all the bodies as a single body in movement. An organic mass, an organ. Originally we wanted 50 singers to create a real organic mass. From there, started the idea of the lung and the breath. Every singer would be a sound alveolus of a lung contracting under the influence of an outside strength, which is represented by the mechanical and hydraulic device. 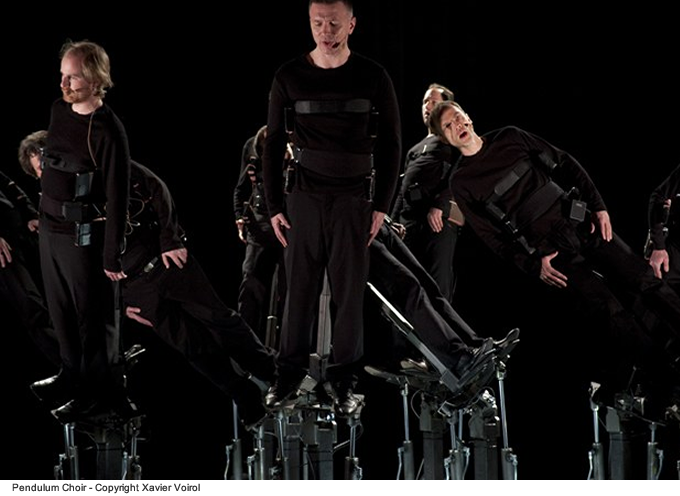 Giulia Tonucci: Could you tell us about the musical score, is it replicated or does it change every time? What is the role of breathing in the musical and, in this case performative, creation?

André and Michel Décoster: The music is written. However for some of the parts, many musical parameters are left free for the singers, such as the profile of the melody. But there is not a lot of difference between the different concerts. The singers learnt the music by hearts, it’s difficult for them because the choir is not conducted during the performance and according to the movements and positions, the singers don’t see each other very well.

Regarding the theme, we consider the choir as a big lung. The theme of the music and the lyrics is breath and breathing. First we did a lot of researches on the different significations of breath and breathing. Each of the nine parts represents a particular notion of breathing. Some of the parts are rituals that deal with symbolic notions of breathing, another part is on the last breath, the breath of death, another part deals with the breath of ecstasy. The whole is a sort of opera on the concept of breath.

Giulia Tonucci: Can you indicate any artist that inspired your work or if there were any influential collaborations that giving rise to Pendulum?

André and Michel Décoster: We have no artist to quote, but at the beginning of our activity, we were in Poland for a long stay during which we worked and presented our work in various Polish events. They were festivals of performance, or places dedicated to sculpture. The Art of performance in Poland stimulated us very much. The powerful and organic way in which it combines the absurd, human existence, matter, flesh, death, the evocation of past with political speech, marked us a lot.

Giulia Tonucci: Which is for you the relation body/machine that emerge from the piece? Even if the result is different, it could remind the works of Stelarc…. In your opinion, how this kind of relation is developed during the last decades?

André and Michel Décoster: We don’t know the work of Stelarc very well but we think that our approach is quite different. Stelarc concentrates himself on the human body and its obsolescence by trying to increase its capacities and properties. We are less sharp in our approach. We try to put in relation the mechanical movement and the sound. With Pendulum Choir we look for a musical and visual novelty by using specific tools of musical, dramatic art, visual art and technology. We don’t master everything. It is a vast and ambitious research with a constantly evolving focal point. 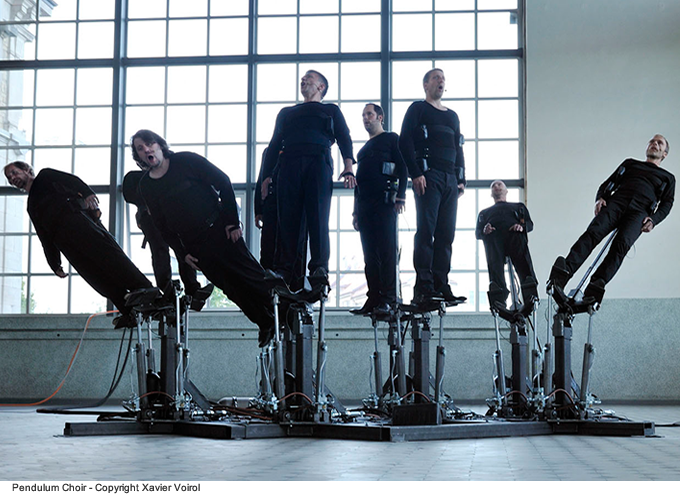 Giulia Tonucci: What will be your next step? Are you already preparing a new project or are you still investigating the interaction and the perception arise between body/sound/machine?

André and Michel Décoster: We’ll continue investigating relationships between movement and sound, but maybe with a rawer, more radical approach. The next project is a huge sound sculpture, it’s name is Nyloïd, the sister of Cycloïd… It will be finished next Autumn!