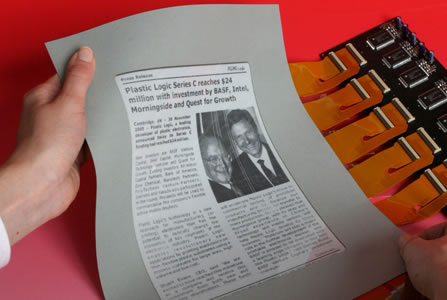 Portable, flexible sheet of electronic plastic instead of a glass-based monitor.

The display, which currently has the resolution of a normal computer screen< 100 pixels per square inch and four levels of gray scale, could help usher in durable, paper-like screens that can be attached to small electronic devices such as mobile phones and then rolled up and tucked away when not in use.

“Plastic Logic’s display represents the current state of the art as far as a working flexible display is concerned,” said Scott Brown, executive vice president of Tokyo-based Sumation, which develops and sells light-emitting polymers for displays and lighting applications.

By adjusting the electric field and thereby the location of black and white spots, black-and-white images can be created. E Ink technology already is behind displays for electronic books, but they have glass-based monitors. Glass is easier to work with than plastic because the millions of transistors needed to deliver the charge to the electronic ink are fabricated and attached to the glass under high temperatures that can deform plastic and throw the pattern of tiny wires out of alignment.

Plastic Logic has found a way to attach the transistors to the plastic under the high temperatures.

Their system uses cameras and a special computer program that work together
to visualize the deformation and automatically adjust the placement of the transistors to ensure that they stay aligned.

“You can drop it or hit it with a hammer and it’s not going to break,” said John Mills, the company’s vice president of engineering.

The challenge, said Brown, is to lower the cost of fabricating the display so that it’s competitive with current technologies.

“There is still much to be done to show that such modules can be made reliably and reproducibly at acceptable manufacturing line speeds and costs,” said Brown.

Plastic Logic is working toward that goal as well as improving the display’s quality.

According to Mills, the company has already demonstrated displays with a resolution of 300 pixels per inch and that they will have a letter-sized prototype by the middle of next year.