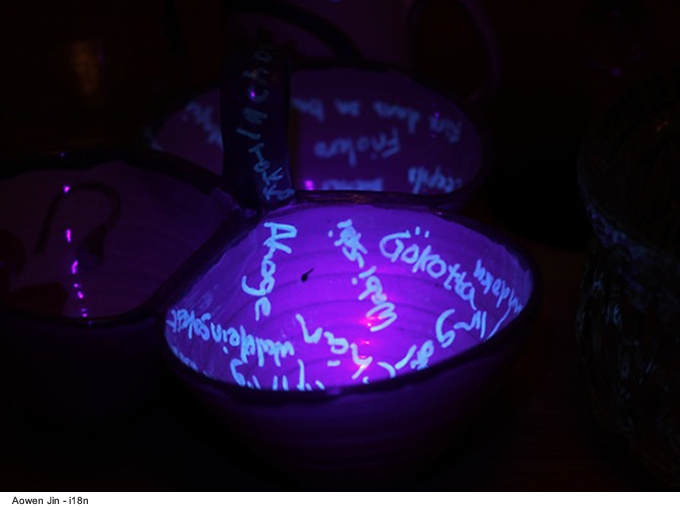 The story of how the works of art (and art itself) have been made and especially how they have been viewed by the public is perhaps one of the most interesting chapters for those studying the social, technological and philosophical changes of cultural and economic contexts; the concealment of devotional works, as described by Walter Benjamin in the seminal book The Work of Art in the Age of Mechanical Reproduction, reinforced and often provided the essential association of communities linked to it or its “aura”.

This dynamic has undergone over the centuries in different social contexts numerous and sometimes important changes, up to the current situation: in an environment where often the importance of a work is measured on the basis of its virality, on its ability to capture the attention of an increasingly diverse audience, a work like i18n, made by the Chinese artist Aowen Jin, requires our attention for the manner in which addresses this problem.

It consists in a series of drawings made by hand on the walls of the Music Gallery Performance Space of Horniman Museum and Gardens in London with a special paint which may be available to the public only with the help of UV torches: the drawings depict scenes of the traditional Chinese culture and interact directly with the history of the British institution 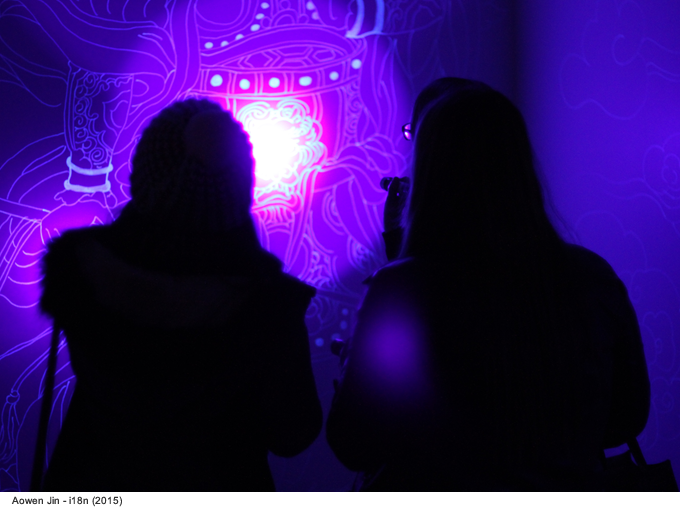 Filippo Lorenzin: How and when did you start working on i18n?

Aowen Jin: I started reading about and thinking about the artworks from October 2014. I had to decide what to draw which will represent current Chinese culture, as well as resonating with the history and legacy of the Horniman Museum and Gardens. My work has always been about reflecting culture and society right now, so it was an exciting challenge to deliver that social context in the historical setting of the Horniman.

Actually completing the work, which covers over 100 square meters of space, took just under a week. I composed and drew everything by hand myself.

Filippo Lorenzin: One main point of this project is the fact it’s not easy to see your drawings and it actually takes a certain degree of effort. How does this is related with your previous practice as artist?

Aowen Jin: My art is always about observing and commenting on people and their stories as they live their contemporary lives. I use these stories to understand the cultural and social issues around me and I share these thoughts with the viewers through art. One thing that always frustrates me is how art and other visual images are fighting for attention, and overstimulate our senses. As a society we are losing the ability to be inquisitive, to be curious – we become passive receiver of imagery, and in doing so, it loses its impact and its meaning.

That’s why I’m fascinated by artwork that takes effort. I think that when you take effort to uncover a story, you feel a greater satisfaction in that discovery and also pay more attention to the underlying meaning. 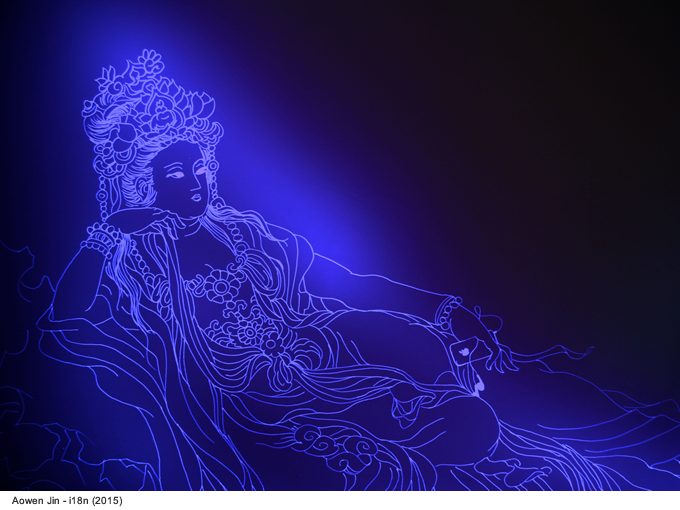 Filippo Lorenzin: I’m especially interested in the manner in which the drawings are hidden – it recalls me Walter Benjamin’s reflections on aura. I want to ask you what does it mean to hide your works in an epoch in which the routine is to develop overdocumentated art projects.

Aowen Jin: It has always been a challenge for contemporary artists to find the right balance between giving people enough information, and keeping the work free enough for the viewers to make up their own mind. The viewer needs freedom to find their own reading of the work. I think this is a very personal decision, but once created, the artwork does not belong to the artist alone but can be openly interpreted by everyone else.

I find it liberating as an artist to listen to my audience’s feedback on the works – and feel that process is as valuable as producing the work in the first place. It helps me to appreciate other people’s culture and create a better understanding of the world as a whole. You can never completely control how your work is being read because everyone has unique experiences in life, so it’s all about how much an artist wants to guide her viewers. 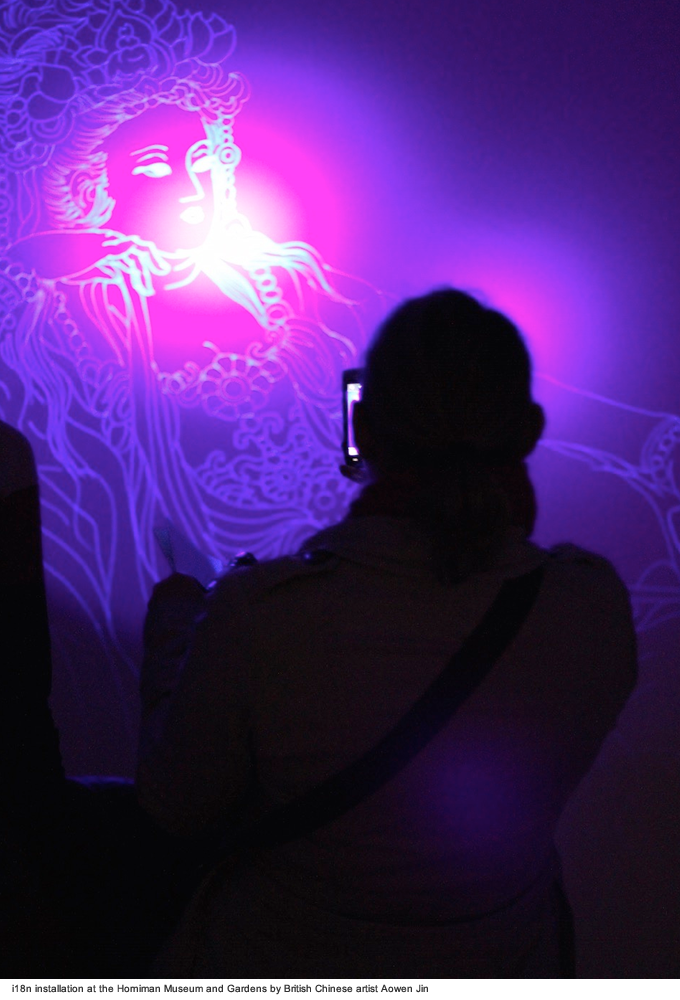 Filippo Lorenzin: The drawings are strictly bound with the spaces of the Horniman Museum, with its founder’s activity in XIX century. Could you describe how did you select the themes to represent? Your works are very often related with contemporary Chinese conditions. How does this project follows this path?

Aowen Jin: Actually the big reason I was delighted to be involved with the Horniman was because when I was approached by the museum, I was given complete freedom to decide on a theme that I wanted. I was incredibly surprised that they were so open to let me ‘vandalise’ their famous Music Gallery Performance Space. After my experimental exhibition in Kings College late last year, I was excited to take that idea further and produce a larger-scale site-specific installation on the same idea. I wanted to create art which forces the viewers to make an effort to discover the artwork by themselves.

On the surface the artworks seem very traditional. For example, they feature the story of the Monkey King from Journey to the West. This is a nod to the history and cultural legacy of the Horniman – the founder tried to bring Chinese culture and lives back to Britain through objects and steam ships. In i18n I want to bring Chinese culture to the local community by using gods and ultraviolet technology.

However another key influence in the work is also the world of the internet, and the way that mass communication has been transforming global cultures. Even the name of the exhibition is a reference to internet technology, with i18n being standard tech jargon for “internationalization” – the means with which we can represent different cultures in the same space online. Because of the internet, because of social media and of internationalisation, we are always looking for and expecting something new. It seems that not only in the West but also in China we are only bothered about the modern China. Now everyone in China, from the president to the average Chinese person on the street, complains about the diminishment of historical Chinese values and culture. With economic progress, this rich and magical history has disappeared from contemporary China, to be replaced by cars, handbags and CG’ed blockbuster films. That’s why I want to draw everyone’s attention to these powerful art works and culture like the Mogao Caves, which attracted the West to China in the first place. 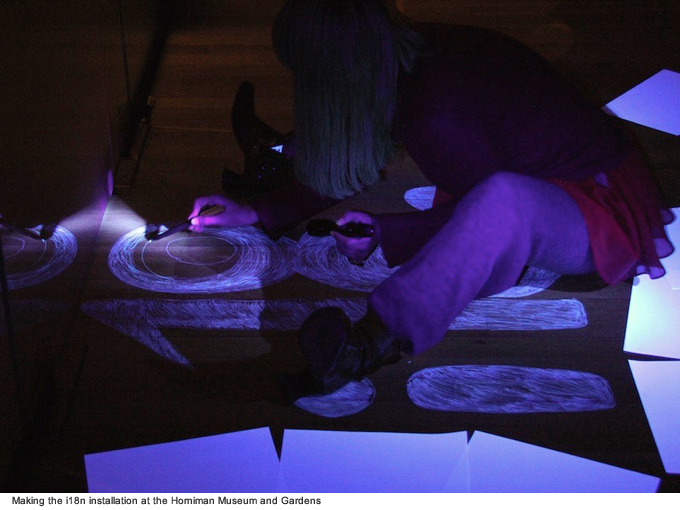 Filippo Lorenzin: What are your plans for the future?

Aowen Jin: For the next couple or months, I will work on fashion events for Chicmi, along with doing a series of talks in universities and with organisations such as the South Bank Centre, to inspire others and share experiences on how to succeed in the creative industries. My main exhibition of the year is a project in collaboration with The Body Narrative to explore how African/Caribbean young women express their identity in London through the colour of their skin. That will be much later in the year.