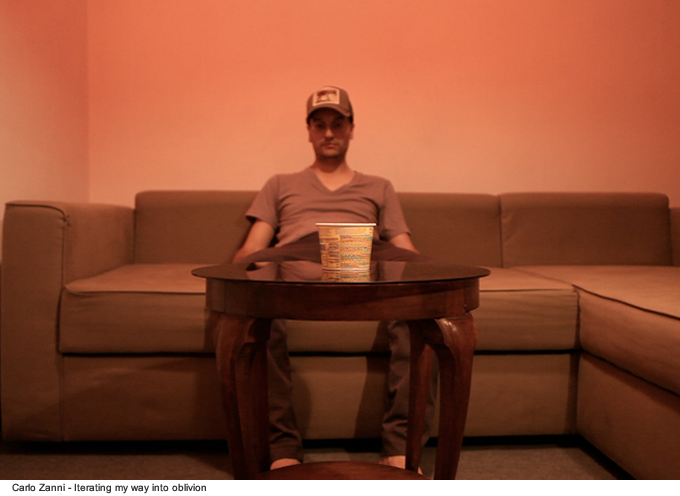 During the Salone del Mobile 2014, Marsèlleria presents OROBORO a exhibition that puts Carlo Zanni‘s works in dialogue with a selection of design items created by designers Raw-Edges, Ilaria Innocenti and Giorgia  Zanellato and by producer Mirko Rizzi spanning the three floors of Marsèlleria.

The exhibition unfolds as a journey towards three key concepts: birth, life, and death of the individual; identity formation and development in relation to others; political tension and participation. Oroboro, the snake that eats its own tail, symbolizes the cyclical nature of things and, in alchemy, it stands for an infinite process.

The dialectical relation between Carlo Zanni‘s digitally produced works and the design pieces provides a meeting ground where “immaterial” artworks and handmade objects coexist. The exhibition layout is designed so as to convey an innovative approach to collecting video art through the artist’s works: theuse of multiple channels of distribution allows for low-priced, potentially limitless editions with no artist’s signature suitable for a wider circulation and accessible by a larger public.

The ViBo (Video Book) enjoys all these features. It is a case resembling both a book and a digipak holding a screen where videos and digital works are shown, such as Self-Portrait With Dog (2008), Iterating My Way Into Oblivion (2010), Self-Portrait With Friends (the lazy bums) (2012), The Sandman (2013). The ViBos are mounted on Adobe, desk accessories created by Ilaria Innocenti and moulded after the handmade process of clay brick making. 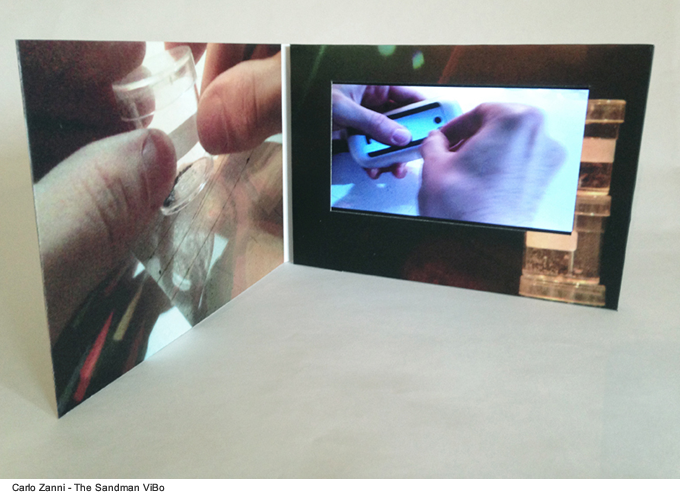 Works and objects selected by the artist are exhibited on eight tables realized by Mirko Rizzi in keeping with Enzo Mari‘s rules of Autoprogettazione (Self-design). Standing on Plaid Bench, a structure designed by Raw-Edges, is Carlo Zanni’s latest installation Atlas (2014), consisting of a number of white paper sheets flecked  with black dots. Each dots indicates  a US military  base located in Italy so that connecting the dots generates a portrait of the country different from its geographical shape.

Giorgia Zanellato‘s Balloon lantern lights up Zanni’s tictactoe (loser), a work based on the free distribution  of email spam the artist received by curator  Dan Cameron that aims to expose the flaws of email protection systems under hacking attacks. Designed by Ilaria Innocenti, the room divider Armando e Lia becomes a screen for projecting the video my country is a Living Room (2010), a “surrealist” poetry composed with the automatic text editing tool Google Scribe (no longer available): all Google’s suggestions were accepted after typing one word or just a few letters.

Committed to the logic of open-source, self-production 2.0, copyleft and to the idea that contemporary art and design elude system of mass production and distribution, Zanni presents the video Koh-i-N∞r featuring an unreleased piece of music by Moby, commercially licensed from the revolutionary project mobygratis that offers over 150 tracks for free. If the material is used on a for-profit project, part of the proceeds will go to the Humane Society, an animal protection organization.

The exhibition is accompanied by a critical text by Laura Barreca. Laura Barreca is an art historian and curator, and lecturer in Phenomelogy of the Media at the Academy of Fine Arts in Palermo. Special thanks to: Karpeta, Atipico, Dilmos Milano, ilaria.i 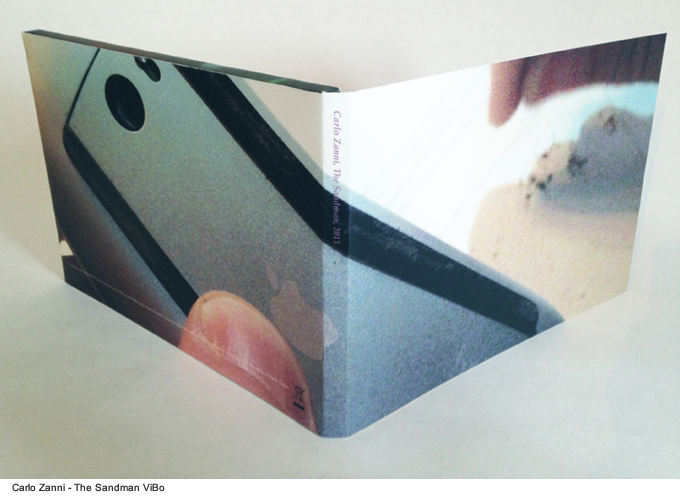 This official collaboration between Yael Mer & Shay Alkalay started after many years of sharing life, thoughts and ideas. Yaelʼs main focus includes turning two-dimensional sheet materials into curvaceous functional forms, whereas Shay is fascinated by how things move, function and react. Since their graduation show at the Royal College of Art in 2006, they have received several highly respected awards including The British Council Talented Award, iF Gold Award, Dutch Design Award, Wallpaper* Design Award 2009 and the Elle Decoration International Design Award for best furniture of 2008_09 and awarded as the Designer of the Future for 2009 from Design Miami/Basel. Their works have been exhibited internationally and can be found within the permanent collection of the MoMA New-York and other museums. They for clients including Cappellini, Established & Sons, Moroso, Kvadrat, Stella McCartney, Arco, Mutina, Lema and in addition, Yael & Shay produce from time to time unique and limited-edition designs and installations within their own studio in London. Their work has been featured in many major design publications and newspapers worldwide.  http://www.raw-edges.com/ 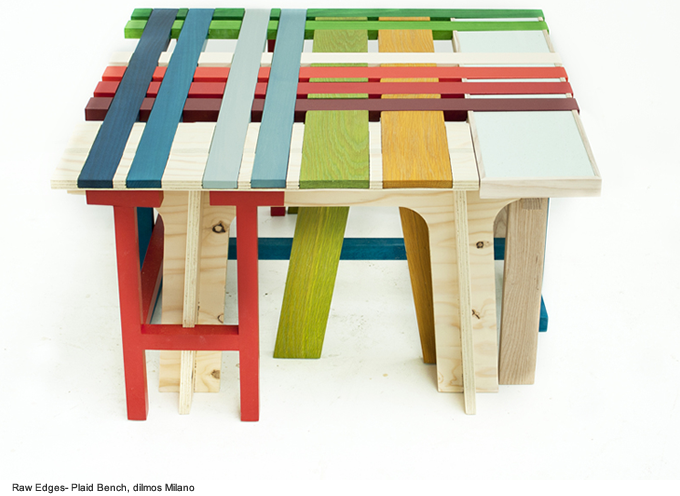 Born in 1983, lives in Milan where he worked in the area of product and interior design. In 2005 she graduated with honors at the IED in Milan  and  with  some  classmates  founds  Studiomorinn (studiomorinn.com)  In  2010  participates  for  the  first  time  at  Fuorisalone  and  from  here  she  begins  his research work on a decorative language: a complete  creative process to find the perfect balance between the free-hand drawing, texture and craftsmanship.  Since January 2013 she is the art director of Karpeta, a company specialized in the production of handmade carpets and furthermore she collaborates with other companies  in the area of furniture and complements  and she self-produces  her own line of homeware with the brand ilaria.i. This year at the Salone del Mobile in 2014 she will be in Ventura Lambrate with OVERLAY, a collection  of containers  made  of terracotta  and  epoxy  resin  inside  the  event  Another  Perspective  2  | Another Detail (www.anotherperspectivecotto.com), she will be exhibiting at the Triennale Design Museum with some pieces of its production. (AUTO SELF – The Italian Design Between Autarky, Austerity and Self- production, curated by Beppe Finessi).  http://www.ilariai.com/

Born in Venice, Italy, in 1987, Giorgia Zanellato graduated from the IUAV of Venice in September 2009. In October of the same year, she moved to Switzerland where she started a Master in Product Design at ECAL (Lausanne) that she ends in july 2011 presenting the collection of vase “Narciso.” In october 2011 she joined Fabrica, the Benetton Research Center, where she is actually working as a product designer. Giorgia is been working as a freelance designer as well for different companies and galleries such as the french brand “Petite Friture” and the italian art gallery “Galleria Luisa Delle Piane”. Her designs have been exhibited at Milan Furniture Fair, Maison et Objet, MUDAM Museum (Luxemburg), Miami Art Basel, London Design Festival and others. http://www.giorgiazanellato.altervista.org/ 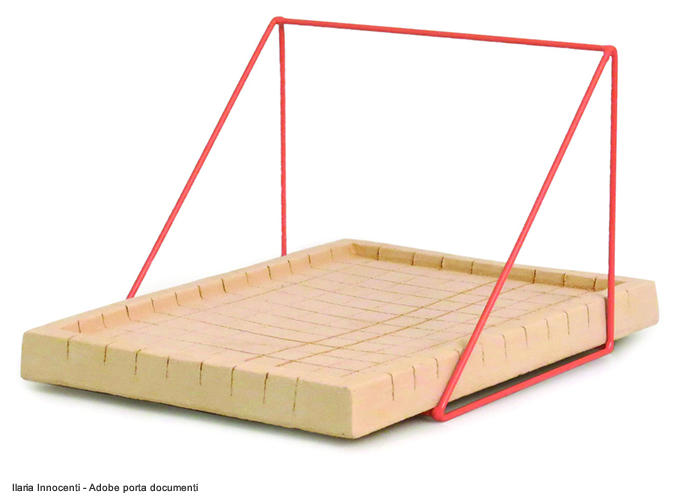 Convinced that style is a global cultural practice, averse to pigeon-holing,  Mirko Rizzi shifts easily between roles. If the mix of languages is the essence of the contemporary scenario, Rizzi’s daily practice is a practical application  of the assumption.  Mirko Rizzi turns concepts  into esthetic, using the latter as communication tools. He handles the immaterial making it consistent. Dryness, concentration, passion and involvement are the key to his language.  Rizzi’s  work speaks  of borderless  creativity,  authenticity  and radicalism,  without rhetoric.  All  power  goes  to  the  imagination  because  reality  is  a  product  of  fantasy.  Mirko  Rizzi  directs campaigns,  curates  spaces  and  generally  invents.  He  is  the  lens-man  behind  the  Marsèll  advertising campaigns, starring not-yet-known  artists, and programs the activities of Marsèlleria  Permanent Exhibition, the  multi-disciplinary  platform  he  created  in  2009.  He  is  also  the  mind  behind  Gabbianacci,  the  ever- changing gallery-shop  opened in 2011 on via Cadore. If you want to define him, he is a concept designer. With no pomp and circumstances.  http://www.mirkorizzi.com/