Orange between orange and Orange. Michael Joaquine Grey at Carroll/Fletcher 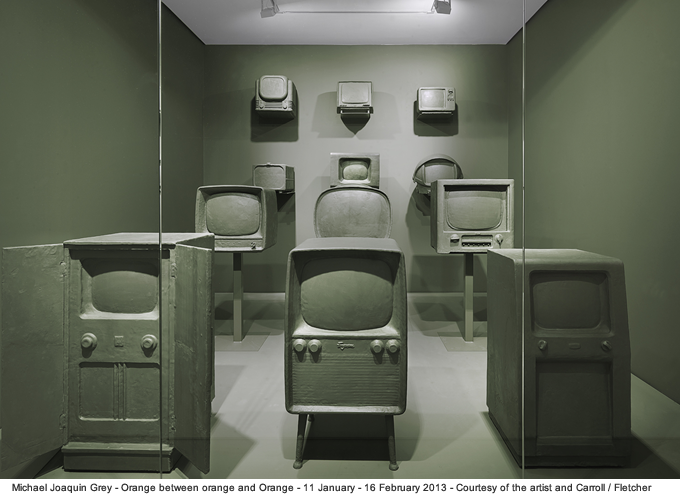 Michael Joaquin Grey (born 1961 in Los Angeles, CA) is an artist with degrees in genetics, art and sculpture. That being said, we can understand why by entering the space of the Carroll/Fletcher gallery in London, we feel like being in a sort of scientific laboratory or an anthropological museum.

Several small scale artworks – all connected to each other – are installed in the first gallery. At a first glance, the show is hard to comprehend, but by looking closer at the different artworks we can understand that they are actually in relationship with each other. Furthermore, the viewer is helped to fully understand the meaning of each work through a list of terms.

Every work has a specific reference to a scientific experiment or phenomenon, such as Orange between orange and Orange (1989), which is one of the earliest works of Grey, or C Drop Experiment (2012). According to the artist’s practice these works are focusing on the idea to break the boundaries between the ‘Two Cultures’, through art and humanities on one side, and sciences on the other, which are apparently isolated in Western society (The Two Cultures, lecture by Charles Percy Snow, Senate House – Cambridge, 1959). 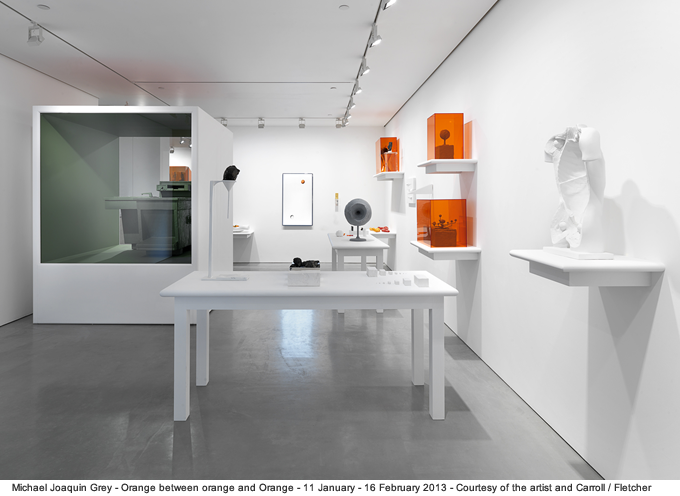 Photocopiers, vintage television sets, radios and cameras are the subject of Morphologies, a new project especially developed for this exhibition. These object are arranged in the showcases in the various spaces of the gallery and thanks to their colours – green-grey clay, recalling a sort of antique artefact – symbolize the 20th century technological innovation and its evolution. By taking a careful look at these modern objects displayed as they belonged to an ancient era, we can realize how fast the development of new technologies overtakes the old ones, by making them obsolete. The same objects together with other tools we use everyday, fluctuate in a sort of post-human space in the video Umwelt Belt (2012), as they were the last proofs of a recent past.

So What 2012 (2005 – 2012) is a double channel computational film displayed on two large-scale front screens. The atmosphere is, again, the space or, as mentioned on the press release, ‘a contemporary orrery’. The movement of the planets becomes faster and faster and it generates a sort of hypnotic rhythm associated with music and with the voices of Steve Jobs, Ella Fitzgerald and Werner Herzog, among the others, which are reminiscent of a channel surfing on radios.

The final room of the show includes Sandbox 1.1 (2013), an interactive installation that reminds us of a Kindergarten. In a recent interview with Thomas Asmuth published on http://switch.sjsu.edu/ Grey explained his relationship with pedagogy and education: ‘The thing that I thought was left out of my art education was the history and structure of the pedagogy in art school. We were very influenced by the Bauhaus. Go back to the Museum of Modern Art, let’s look at Alfred Barr, the first director who put together the description of who began who in art history – the foundation for the canon of American Modern culture. When you look back at the precursors you see references to Japanese prints and African art. However it doesn’t take into account a major influence: the Kindergarten.  The Bauhaus which is the primary model of art education in this country (the studio/atelier model) was an absolute rip-off of Kindergarten”.

For the artist, the experience in the Kindergarten, that is how we play as children, is fundamental to develop our future behaviour as adults. Visitors are invited to play with the installations, which is made up of sandpit and wooden blocks with the aim to rediscover the value of basic experiences.