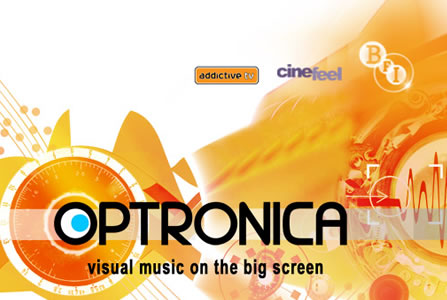 This exhibition is a collaboration between Optronica, Cinefeel and Le Cube .  With many thanks to all the artists, Digicult and VJcentral.it.

This Optronica exhibition showcases a generation of innovative artists who explore the synergy between music and visuals, and who are also developing new techniques and new tools. From video scratching to audiovisual remixing, from generative art to interactive work, the programme of video installations shows diverse aesthetic trends in the current AV scene and contemporary visual music.

Many people feel and enjoy the naturally close relationship between image and sound, particularly music, whose aesthetic purity has inspired some of the most progressive art of our time. The desire to emulate musical forms in visual art led to the development of what came to be known as visual music. Although visual music was itself not a formalised movement, it was, and is, an important undercurrent and motive force in contemporary art. Optronica is not just modern visual music, it refects a wider genre which continues the visual music tradition, but has grown to include the wide range of styles and practices which audiovisual artists, animators, experimental film-makers and collaborative multi-media groups employ today.

The work presented in this exhibition shows diverse trends of the genre. With their multimedia project Naphtaline, EZ3kiel , the most adventurous band of the French electro-dub scene, take us on an interactive journey full of fantasy and poetry; Brian Kane , a founding member of pioneering American video sampling group EBN (Emergency Broadcast Network), presents his new interactive work HDADD ; leading UK artists Addictive TV show their remixing talent with some of their latest AV work; the innovative project V-Scratch beautifully transposes visually all the nuances of the DJ scratch; for Wingbeats, Thomas Newton developed a system where all the music and sounds are generated by birds’ positions in flight; Japanese trio d.v.d (drummers Itoken and Jimanica plus video artist ymg) offer up a playful visual music animation recorded live during their exhilarating drum-triggered-visuals show.

Plus work from audiovisual artists and VJs who have created and developed their own performance software, including Onionlab , VideoJack , MiniVegas and Joshue Ott ; generative animations by Dextro , i2off.org and David Muth ; and last but not least the dvd Italians Do It Better, a selection of videos from Italian artists curated by Digicult and VJcentral.it . 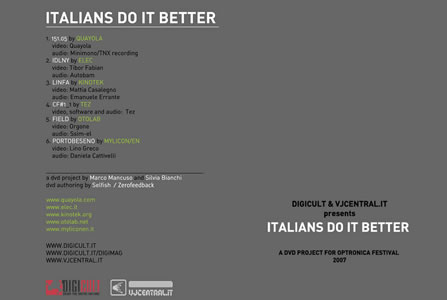 OPTRONICA is a bi-annual festival in London founded by Anglo-French curators Cinefeel and British artists/producers Addictive TV, which champions the fusion and interaction between images and music through live performances, screenings, installations and talks. The festival is organised in collaboration with the British Film Institute and the IMAX cinema. Before its next edition in 2009, Optronica is on the road, presenting selections of audio/visual delights around the world.

CINEFEEL was founded in 1994 in London by French curator Fran ç oise Lamy with the aim to promote digital and electronic arts and new media culture. Cinefeel curates for festivals and events worldwide and have been a curating partner for Le Cube for 6 years.

LE CUBE is located in Issy (in the Paris suburbs) and, since it opened in 2001, has gained a fantastic reputation throughout France as a leading venue for new media arts. Its mission is to promote digital arts practitioners , educate the public and support multimedia creations.