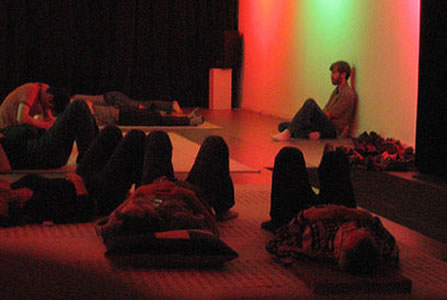 OptoSonic Tea is a new regular series of meetings dedicated to the convergence of live visuals with live sound which focuses on the visual component. These presentation-and-discussion meetings aim to explore different forms of live visuals (live video, live film, live slide projection and their variations and combinations) and the different ways they can come into interaction with live audio. Each evening features two different live visual artists or groups of artists who each perform a set with the live sound artists of their choice. The presentations are followed by an informal discussion about the artists’ practices over a cup of green tea. A third artist, from  previous generations of visualists or related fields, is invited specifically to participate in this discussion so as to create a dialogue between current and past practices and provide different perspectives on the present and the future.

New York-based Austrian artist Kurt Hentschlager creates audiovisual compositions in which audio and video actuate one another. The immersive nature of his work reflects on the metaphor of the sublime. Trained as fine artist, in 1983 he began as a sculptor, building surreal machine objects, followed by works with video, computer animation and sound. Between 1992 and 2003 he worked collaboratively as a part of the duo Granular-Synthesis. Employing large scale projected images and drone like sound environments, his multi channel performances and installations triggered the viewer on both physical and emotional levels, overwhelming the audience with sensory information. His more recent solo work is more poetic and further researches the nature of human perception and the accelerated impact of new technologies on individual consciousness. Hentschlager is a recipient of numerous prizes and large-scale commissions. He has represented Austria at the 2001 Venice Biennial and has shown his work internationally for two decades.   Selected presentations include the Milllenium Museum, Beijing, Staedelijk Museum Amsterdam, In the Anchorage – Creative Time, Inc., New York,  MAC – Musee d`Art Contemporain Montreal, MAK – Museum of Applied Arts Vienna, National Museum for Contemporary Art Seoul, Ars Electronica Festival Linz, ICC Inter-Communication-Center Tokyo, Fondation Beyeler  Basel, Palacio de Bella Artes, Mexico City. His recent solo performance ³FEED² premiered at the 2005 Venice Theatre Biennial and is currently touring and the procedural installation ³KARMA / cell² was commissioned in 2006 by Le Fresnois, Studio National des Arts Contemporains, France.

Shimpei Takeda (b.1982), is an artist working with photography, video, and improvisational performance. Originally from Japan, Takeda currently lives and works in New York City. Primarily self-taught, Takeda began shooting pictures at the age of 18. Later on, he expanded his unique vision and sensitivity to the other mediums . He experiments with the aesthetic, optical and poetic possibilities between abstraction and concreteness. His work has been presented at the Essl Collection of Contemporary Art, Austin Museum of Art, Weisman Art Museum, Schenectady Museum & Suits-bueche Planetarium, and throughout New York City venues including: Issue Project Room, the Tank, and Experimental Intermedia.

Bruce Tovsky is a visual/sound artist based in in Brooklyn, New York. After earning his MFA degree in Multimedia from Rutgers University in 1979, Tovsky began showing his video work across the USA, as well as Europe and Japan. His early 80’s video/sound work INVADED was included in the Whitney Museum exhibition “Video/Music: New Correlations” and toured exten extensively in the USA as part of a Beard’s Fund exhibition of new video art. INVADED was also shown at the 1984 World’s Fair and is in the collections of The Kitchen and the New York Public Library Donnell Film Center. During the 90’s Tovsky focused on collaborations with choreographers, scoring works for Muna Tseng, Charles Dennis and have been presented at Lincoln Center, Joyce Theater, DTW, PS122 and The Kitchen. For the past several years he has been creating live video and
sound improvisations, often in collaboration with artists such as John Hudak, David Linton, Kim Cascone and Michael Schumacher in a variety of spaces around New York City, including Diapason, Experimental Intermedia,
Issue Project Room, Tonic, and his own installation space 106BLDG30 at the Brooklyn Navy Yard. In the summer of 2003 he performed the video/sound collaboration FOR THE TIME BEING with John Hudak at Roulette’s “Festival of Mixology” at The Performing Garage. The audio portion of this performance was released in Octo October 2004 on the Swiss label CUT, and was reviewed in the February 2005 issue of The Wire. His video/sound piece ETHER premiered at 106BLDG30 in June 2005, and played in international festivals from Sao Paulo to Seoul to Paris. The audio from ETHER was featured in”Tracking The Lincolnshire Poacher,” a BBC4 radio documentary on shortwave numbers stations. Tovsky was artist-in-residence at Diapason gallery during October 2006, where he presented his latest work UNDERPASS, a 50 minute silent video piece accompanied by some of New York City’s most accomplished improvisors, including Kato Hideki, o.blaat, Bryan Eubanks, Richard Garet and Matthew Ostrowski. UNDERPASS will be touring the EU during spring 2007.

Carl Skelton has been working professionally as an artist and designer, with a particular focus on the cultural aspects of Communications technologies new and old, since well before receiving his MVA in Canada in 1986. Skelton was an active member of Toronto’s cultural community until 1998, when he moved to New York City. In his spare time, he is the founding director of the Integrated Digital Media Institute in the department of Humanities and Social Sciences at Polytechnic University, Brooklyn. The IDMI offers Bachelor and Master of Science programs, a more or less annual conference series (Hyperpolis), and conducts interdisciplinary research and media-making projects. In particular, the IDMI supports new approaches to media-making through close collaboration between artists, critical theorists, and engineers.