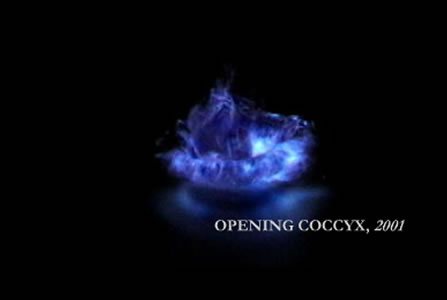 By probing the patterns of extra-corporeal transformations, Evelina Domnitch and Dmitry Gelfand have created art works that spread across a scale of sensorial bandwidths.

The work Opening Coccyx exists as installation as well as interactive performance in which the performer/viewer initiates chain reactions of colliding energy systems.

Current scientific findings, particularly regarding waveform phenomena, are employed by the artists for investigating questions of perception and immortality. Such investigations are salient because the scientific picture of the world serves as the basis for contemporary thought, and nonetheless the rigorous nature of the fundamental sciences does not permit the entertainment of such questions.

The idea of the installation is connected to the Buddhist concept of enlightenment as a final blessed state, and is based upon scientific data that only after birth baby’s nine sacral and tailbones are fused into two, enabling the trunk of the body to stand upright. Until this process is completed it is not possible to reach an illuminated mode. For the exhibition, Evelina Domnitch and Dmitry Gelfand have invited Richard Chartier to create a low-end nature composition  intended to simulate the notion of sound transmitted through light