On October 10, the group ‘Umane Energie’ and the ‘Flussi’ section of “Le Arti in Citta” festival are promoting a seminar called Open Source Meeting at the ‘Fondazione Accademia di Belle Arti Pietro Vannucci’ in the city of Perugia. This is curated by Moreno Barboni and by Marco Mancuso, critic, curator and director of Digicult, and will be participated by Graffiti Research Lab, Pier Luigi Capucci, Laura Colini, Umane Energie and Confinidigitali.

The Open Source Meeting is dedicated to the ever-expanding circulation of ‘open’ computer resources and is meant to get territorial subjects, such as Confinidigitali and Umane Energie, to meet. Their Beduino open-source platform, derived from the international Arduino project, will be the base of a ‘multimedia park’ featuring national and international guests, so as to elaborate on and divulge the possibilities of open-source in the domain of digital arts and multimedia communication, both from an artistic and
planning perspective.

Marco Mancuso and Moreno Barboni have therefore imagined a day of lectures and seminars, a round table of experts, researchers, curators and artists all with different but complementary expertises. This will offer the opportunity to reflect over the enormous potential, however mostly unsaid, of open digital technologies, their impact on the social, operational and political context in which we live, on their interaction with architecture and the social spaces in our urban areas and on comprehending their emotional impact on our perception of new art forms and creative languages.

Evan Roth and James Powderly are the Meeting’s international guests, founders of Graffiti Research Lab, for the second time in Italy after their first public performance ‘Laser Tag’, curated by Marco Mancuso in December 2007 in Rome and projected on the facades of the ‘Colosseo’ and the ‘Cestia’ pyramid. Graffiti Research Lab is wholly dedicated to developing technologies and experimental media to enhance public resources for urban communication. GRL have therefore been invited to explain their artistic/activist project, to describe their performances in cities round the world, to talk about the possible risks and the enormous potential for communication that lies behind applying open source technologies to graffiti and media art.

Pier Luigi Capucci, critic and professor, deals with communication systems and languages and, since the early Eighties, has been investigating the relationship between technologies, culture and society and between art forms, science and technologies. His task in the Meeting will be to trigger the debate around the collective and social impact of open-source technologies. The opportunities of choosing and accessing information and new tools have, in fact, enabled new possibilities for communicating and
sharing knowledge extending the awareness of the cognitive, operative, social, and political uses of these same tools.

Marco Mancuso is the chairman of the Meeting. Critic, curator and founder of Digicult he deals with Digital Creative Media and the relationship between images, sound and space within contemporary Audiovisual Art. Focusing on how open-source technologies have affected the digital Audiovisual domain by showing an overview on the most interesting artistic and creative international projects, he will suggest some critical thought around how these tools are used, around shared creativity dynamics on the Web, free code, and around how ever more intertwined art, design and hyper architecture are.

Laura Colini, researcher at the Bauhaus University in Weimar in the department of Architecture, Media and Urban Sociology, will focus on technologies and participated city-making projects. She will describe the concept of participation in urban planning confronting it with the participation to the city entailed by ITC practices. A sort of shared-practices taxonomy to city-making, called ICT spatial practices, that allows to build up critical thinking and awareness around the urban theme of collective planning.

Lastly, the collaboration between Confini Digitali and Umane Energie that has lead to ‘Beduino’, an open-source electronic device meant to develop interactive, artistic installations. It features audio controls, sensor interfaces, led and motor controls. Slightly bigger than a packet of cigarettes Beduino, based on the more famous ‘Arduino’ hardware/software, can be used without having to write any code by those who are not necessarily computer geeks. It can be used as a real-time audio and video controller, as a MIDI control, it is useful for interactive installations, to control led lights, robotic controls and much more. 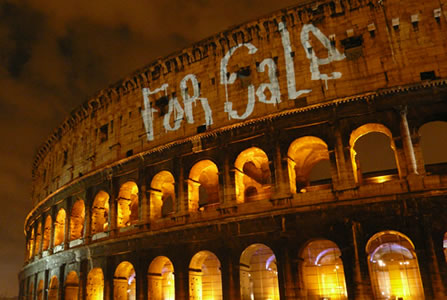 The New York artists and media activists GRL, will introduce their tool for digital urban graffiti: the L.A.S.E.R. Tag. The Mobile Broadcast Unit (MBU) with L.A.S.E.R. Tag payload is an open-source Weapon of Mass Defacement (WMD) designed to enable graffiti writers, artists, activists and citizens to communicate in the urban environment on the same scale as advertisers, corporations and governments. MBUs provide 1200 watts of audio and 5000 lumens of video projection capability mounted on an industrial work tricycle. The L.A.S.E.R. Tag payload allows individuals to write their own personal communications and expressions with a 60 milliwatt green laser on industrial facilities, monuments, towers, bridges, city skylines and other hard and soft targets of interest. The design and custom software for the MBU and L.A.S.E.R. Tag payload has been released open source, without copyright or patent, into the public domain. Hobbyists, hackers and other private citizens are encouraged to freely use, modify and release their own MBU/L.A.S.E.R. Tag designs. Units currently exist in NYC, Mexico City, Barcelona, Austria and Taipei. In NYC the MBU can be “checked-out” for free from the G.R.L. resource library and arsenal for use by interested parties. Advertisers need not apply.

Audiovisual Art, the ability to create works of art – may they be narrative or abstract – by using sounds and images, has undergone a strong innovative phase in the last years. Within the larger context of ‘new media art’ it has found for itself an all-purpose role which is certainly more complex and multi-faceted, going beyond performances and installations. Progress in technology, open-source hardware and software, have eased the management of real-time audiovisual flows. Thus, contemporary Audiovisual Art seems to be today some sort of borderline area which includes pure creative and artistic expression, but also experimentation and design. A critical attitude towards
this phenomenon in analyzing online shared creativity, free code and an ever more intertwined relationship between art, design and hyper architecture allows to observe how the concept of space reflects the existence of a fluid place/non-place to be explored, an element for design, a material and immaterial universe to be confronted with as it redefines the relationship of modern man and the new multimedia scapes surrounding him.

The Opens Source diffusion opened up new options and chances to access the information and new devices. It activated new opportunities in knowledge’s communication and sharing and it expanded the awareness of the cognitive, operative, social and politic use of these instruments. Open Source also imposed a reflection on the software in general as a tool which, although immaterial, has a real, economic value which can’t be ignored in the information age. In the arts, in several realms and disciplines, many
artists embraced the Open Source philosophy and practice, creating artworks which expand their power both at the poetics level and increasing the artworks’ flexibility and sharing, hence enlarging the extent of the artistic discourse

Given the breakdown of defences against information glut, an awareness of how we use, act and interact through modern digital technology is becoming critical. Global trends and symbolic economy shape the production and distribution of a large variety of modern tools that use similar ways to communicate via text, audio, video. As a result, the creative digital communicative syndrome tends to sedate the question of “how and why” we act together and represent and shape our cities and lived space through digital
media. Beyond the many definition of cities, I assume that cities are site of collective spatial practices and discursive processes, procedures and codified protocols leading to social, economic, material and cultural transformations. The purpose of this intervention, is to engage in reflecting on the processes of city-making analysing the benefits, pitfalls, and trade-offs of the combination of spatial practices with ICT. In particular, the parameters adopted to discern and categorize such practices is their capacity to empower local communities and to engender citizens participatory. I argue that the variety of social media, PPGIS, participatory video making and the latest resource on the web, -which have a strong emphasis on spatial related practices- could be analyzed according to their capacity to stimulate directly or indirectly socially and politically transformative approaches to city making. In order to validate the importance of studying the interdependency of ICT, social interaction and urban planning, I will refer to the selected research and case studies looking at their capacity of engendering truly participative processes, trying to unveil their limits, rhetoric, and visible/invisible power
interests.

Confini Digitali e Umane Energie present Beduino, an open source instrument, designed to simplify the process of creating electronic based art projects. It can be used for music controllers, VJ controllers, MIDI instruments, dance triggers and body suits, interactive installations, driving LEDs, motor and robotic controls and much more… It is based on the well-known Arduino platform, and 100% compatible with it, but intended to be used even without writing a single line of code. Beduino comes with a MaxMsp patch, possible and free to use with all major operating systems.