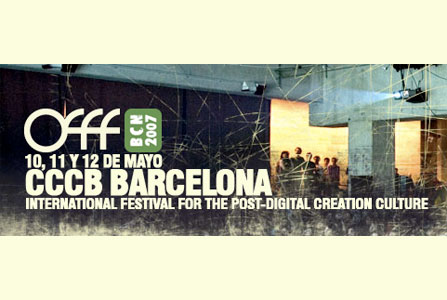 After six years observing the explosion of creativity and inspiration that the post digital era has left behind, Offf wants to make a stop, take a deep breath and get strength before the next jump. It needs new visions and new strategies to find out the most appropriate way to say things in this state of crisis. Since 2001, Offf is exploring software aesthetics and new languages for interactive and visual expression. Every year, the festival features digital artists, web and print designers, motion graphic studios and avant-garde electronic musicians.

Re:Fresh, the 2007 edition, is the most ideological edition in the history of the festival, and starts with an invitation to rethink the most fundamental concepts. John Maeda, the founding figure of interaction design, visits Offf for the first time to speak about his fight for simplicity.

Futurefarmers, the team led by Amy Franchescini, will address their transformation from a sought after design studio to a collective of artists that offers sustainable experimental solutions changing our relation with the environment. Along with them, legendary talents like Neville Brody and renovators of the graphic medium such as James Victore will explore the political dimensions of design and its capacity to influence on the world.

Offf also wants to visit new places and points at the work of those who are finding different ways of doing things. Some of the most exciting are happening in the walls of great capitals all over the world, as you can see if you have a look ad the work of Wooster Collective, the preeminent online observatory of the global street art scene, and the outstanding Graffiti Research Lab, New York’s R&D unit that is changing street aesthetics with cheap technology and open knowledge.

Graffiti Research Lab, one of the emerging collectives in the international new media scene, will be giving an urban guerrilla tactics workshop in collaboration with art production centre Hangar. Interaction Designer Erik Natzke and illustrator and graphic designer ISO 50 – Scott Hansen will be the other protagonists of the program of workshops at Offf 2007.

The main stage of the festival will be offering sophisticated audiovisual experiences like the exciting pictorial world of musician and digital video artist Takagi Masakatsu, a rising star of the live global AV scene. Plus, on a rare occasion halfway between talk and performance, iconic sound artist Alva Noto (Carsten Nicolai) will present, together with his associates from Raster Noton, Frank Bretschneider and Olaf Bender, a journey through the visual history of the mythical Berlin label they founded in 1999.

Zachary Lieberman, one of the most internationally renowned interactive artists of the moment, will premiere a surprising new live show in collaboration with Theo Watson telling the story of a neverending line on a screen.

Reinventing itself, Offf proposes new formats and dynamics; there will be a virtual Stefan Sagmeister, in his office, coming in the shape of a Documentary/Interview made and produced by Offfilms presented for the first time and exclusively for this festival.

Showplace, the exhibition area of the festival, keeps on growing, more ambitious each year. Openroom and Cinexin are the spaces for emerging names and moving images that require no introduction. Loopita merges with Roots in the main hall to focus on AV fusions. And the open space Mercadillo becomes againg the great social spot of the event, the perfect place to enjoy one of the highlights of Offf: conversation.