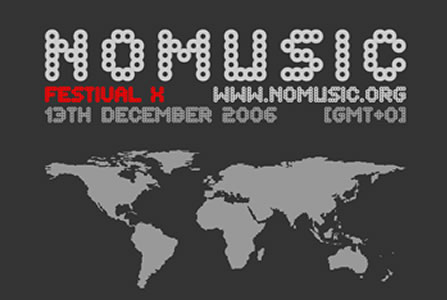 (((NOMUSIC))) started on June 2001, according to the principle that a diffusion site on Internet should correspond to the representation of the singular performances of a new generation of artistes, musicians, performers and other actors of the electronic scene.

The creation of this open diffusion site proved to be necessary because of today’s difficulty to perform disembodied concerts of electronic music on stage, in a classical frontal (actor/audience) representation space. Nowadays, these emerging new multimedia performances allow everybody to approach music in a more singular way, with a different listening practice and on a more sharing scene. Every year since 2001, (((NOMUSIC))) offers one or more festivals which programming is geographically variable and which function is to relay in a coordinated way a 24 hours earth revolution of no-musicians @ home. This virtual earth revolution materializes a world wide sound cover of 24 time zones according to the universal time [GMT 0].

This gives to participants who are scattered all over the world the opportunity to take part in the festival. The participation is free of charge and the recruitment is made exclusively on Internet through diffusion lists. The selection is not made according to practices and genres criterion but rather according to the approaches and artistic positions which should echo the logic of the festival.

(((NOMUSIC))) platform offers two types of live. In its classical form, the participant plays alone at home for one hour. He can also play in dual. Dual is a live in which two geographical sites are linked via Internet and mixed together in stereo (participant 1 on the left channel and participant 2 on the right one). (((NOMUSIC))) wishes to generate improbable duals and gatherings between two participants during one hour time in a web audio performance.

We make no storage because we think that Internet is a huge database which conveys already a great amount of dead informations and we don’t want to pollute it further.