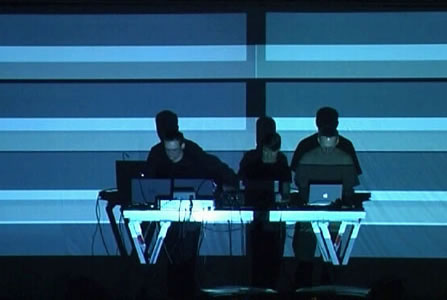 For its fourth exhibition, the gallery of the Society for Arts and Technology presents works in sound and graphics by an internationally renowned German collective, Raster-Noton . The new show, entitled White Line Light , begins June 23rd and runs until the end of August of this summer. The opening night will feature an inaugural concert by some visiting artists from the Raster-Noton record label: Frank Bretschneider , Olaf Bender , and Jens Massel (Senking).

Two long lines of light fashioned from hand-made neon lamps divide the hall; their luminosity waxes and wanes to the electrical intensity of original sounds permeating the gallery. On the walls we find an innovative form of wallpaper, of which the motifs are the graphic symbols of the sound texture: an endlessly repeating pattern, over which slices of black plastic film can be pasted into an outline variation of a raster. In the corner, a 60-GB i-Pod stands embedded between two panels of acrylic glass. Visitors to the exhibition can access all the audio titles released by the label and listen to these tracks in high resolution quality. (The label’s catalogue comprises about 75 releases, or 70 hours of audio material.) A display table will also be set up so visitors can examine or buy CDs, DVDs, books and other creations. Raster-Noton is known for an aesthetic focus on rhythmic, minimal electronic music partnered with unconventional and equally minimal graphic productions and installations.

The collective arose from the merger, in 1999, of two separate labels based in Chemnitz , Germany : Rastermusic, founded by Olaf Bender and Frank Bretschneider ; and noton.archiv für ton und nichtten, founded by Carsten Nicolai . Their investigations of sound frequencies and new forms of musical syntax overflow into the visual arts, resulting in modular conceptual projects that represent a highly creative fusion of digital music with graphic design. The label enjoys a reputation for groundbreaking research and development in the arts thanks to the dedication of its founders and the great mass of skills arrayed by its team. These artists include: Olaf Bender, aka Bender, graphic designer and label manager (Chemnitz), Carsten Nicolai, aka Noto or Alva Noto, contemporary artist (Berlin) Frank Bretschneider, aka Komet, composer (Berlin) Jens Massel, aka Senking, composer (Cologne) Ivan Pavlov, aka Coh, composer (Stockholm) Ryoji Ikeda, composer and visual artist (New York) David Lettelier, aka Kangding Ray, architect and musician (Berlin) Jon Egeskov, aka Pixel, composer (Copenhagen).

The exhibition is presented by SAT[Gallery] in association with the Goethe Institut of Montréal and the Raster-Noton collective. The guest curator for this fourth exhibition at the gallery is Eric Mattson , director of the ORAL music label and Raster-Noton’s representative in the Americas .

The inaugural concert for this exhibition is entitled r.p.m (revolutions per minute). It features musical explorations by three artists on the Raster-Noton label: Senking  Frank Bretschneider  Bender. The SAT is honoured to welcome Jens Massel (aka Senking) to Montréal for his first ever performance in North America . A native of Cologne , the composer has put out many different records under a variety of aliases (e.g. Fumble/Kandis, on the Karaoke Kalk label). As Senking he recently released a new recording entitled List, his fifth CD on Raster-Noton.

Frank Bretschneider (aka Komet) works as a musician, composer and video artist in Berlin . His work is known for its precise sound placement, complex rhythm structures and minimal, flowing approach. As a co-founder of Raster-Noton, he played a major role in the growth of the label’s image. He is a member of Signal, the “laptop supergroup” that includes Olaf Bender and Carsten Nicolai . Olaf Bender is the artist formerly known as Byetone. Now active under the simple alias of Bender, the composer issues most of his work on the Raster-Noton label, which he has directed since its inception. His great skills as graphic designer have also been crucial to the label’s success. In 2004, Bender and his labelmates Frank Bretschneider and Carsten Nicolai gave a stunning performance at the MUTEK festival when their group Signal was the triumphant closing act of a program dedicated to the Raster-Noton label.