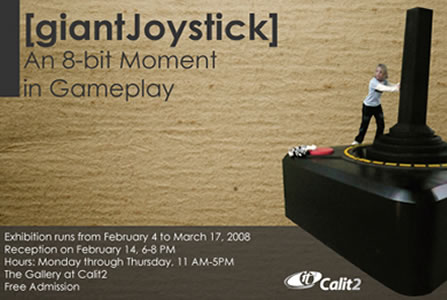 Imagine a joystick that is bigger than most basketball players…and requires at least two people to operate it. That’s the challenging, quirky and ultimately fun concept behind “An 8-bit Moment in Gameplay: [giantJoystick]”, an art-meets-technology exhibition opening February 4 in the Gallery at Calit2, a small space with big ambitions.

Located on the first floor of Atkinson Hall on the UC San Diego campus, the space is part of the UCSD division of the California Institute for Telecommunications and Information Technology (Calit2). The gallery will have its formal opening in the spring, but [giantJoystick] will be open to the public every weekday from 11am to 5pm through March 17 (with a reception planned for February 14 from 6-8pm).

An interactive artwork and play sculpture, [giantJoystick] is a working, large-scale game interface designed for collaborative play, by artist and media theorist Mary Flanagan. Video games have been around for over forty years, and have redefined our reality with classics such as “Pac-Man”, “Asteroids”, “Centipede” and “Missile Command”.

Video game consoles, which offered low-resolution graphics known as 8-bit, were introduced in the 1970s. But it wasn’t until the early 1980s that they became wildly popular, moving video games from the arcade into the home with the Atari 2600 game console. That console featured a distinctive joystick, and Flanagan takes visitors back to the seminal period by turning the Atari joystick into a super-sized work of art that she considers a form of social sculpture. 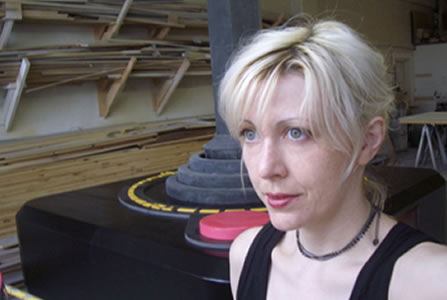 Flanagan investigates everyday technologies through critical writing, artwork, and activist design projects. “Mary Flanagan makes art and popular culture become one, following in the tradition of pop art,” said Ricardo Dominguez, a visual arts professor and member of the Gallery at Calit2 programming committee. “She also explores the aesthetics of gameplay, which today has extended beyond video games to influence media and culture at large.”

The artist’s work has been exhibited internationally at museums, festivals and galleries, including the Whitney Museum of American Art . “The exaggerated scale of [giantJoystick]’s installation emphasizes the physicality (and absurdity) of interfaces in their relationship to the human body and human interaction,” said Christiane Paul , adjunct curator of new media arts at the Whitney Museum. “Rather than treating the joystick as mere access point to the “other” of the virtual world on a screen, the project highlights the joystick’s role in and connection to the physical world and the social nature of play.”

Mary Flanagan‘s work has also been exhibited at the Guggenheim, SIGGRAPH, The Banff Centre, Central Fine Arts Gallery NY, Artists Space NY, the University of Arizona, University of Colorado-Boulder, as well as institutions in Brazil, France, UK, Canada, Taiwan, New Zealand, and Australia. Flanagan ‘s projects have been funded by the National Science Foundation, the Pacific Cultural Foundation, and the National Endowment for the Arts. Her research group and laboratory in New York is called TiltFactor, a lab focused on the design of activist and socially-conscious software. http://www.tiltfactor.org.

The Gallery at Calit2 reflects the nexus of innovation implicit in Calit2’s vision, and aims to advance our understanding and appreciation of the dynamic interplay among art, science and technology. Calit2 recently appointed Eduardo Navas as Gallery Coordinator.