The never-ending performance that is living. An interview with Hugo Olim

The still image, which can be a photograph, or a frame of a video, or even a pixel, is a unity and as such it is a departing point for Hugo Olim’s artworks concept. Metaphorically, the still image, as is presented to us, results from a dialogue with sound from which it receives properties of rhythm and movement.

In video works as in visual performance, the connections established between image and sound are apparently result from an intertwined dialogue based on a structure defined as visual music. Visually, the image is often abstract and resultant from collaborations with sound artists. An example is the video Mic.Madeira (2011) with sound by Simon Wetham, edited as DVD by Portuguese label Crónica Electronica. Videos such as 2link (2007) and Interrupt (2009), both with sound by João Ricardo, present a composition where sound and image are in unison. If on the first connection it is almost literal, after awhile, due to absence of information, silence in sound and blackness in image, are elements that provoke intensity. This continuous dialogue between image and sound, explicit in video and performance works, becomes implicit in the series or single photographs. The process is interesting to pay attention to especially if the artist explains the multiple layers and connections.

From watching the videos and other documents available at Hugo Olim’s website, his profound interest in process is unveiled, extending to several perspectives from where the approach is made to his work, either through aesthetics, technical or technological. Process relates with transformation, or perhaps evolution instead, toward something new rather than something better. Performance is a vehicle to discover rather than a potion of arrival. 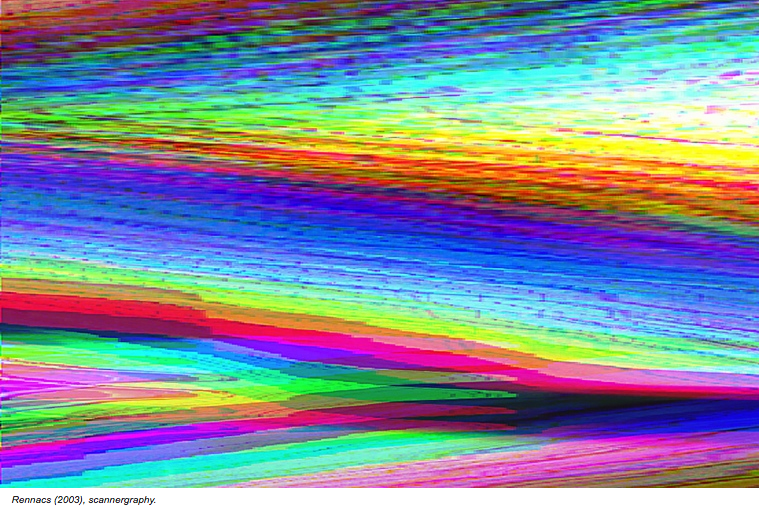 Ana Carvalho: Is performance part of the means to your investigation (into the possibilities of the world) and how is performance different from film and photography?

Hugo Olim: Although the performance is not the main subject or goal of my investigations, it plays an important role in all my work. It’s more like a process through which I can reach the surprise, the unexpected, the new. I see performance as a live and vivid act. When I’m performing or in a ‘doing things state of mood’ I’m trying the possibilities of certain frequencies of the magnetic field spectrum (as you said in the question: “into the possibilities of the world”), I’m working in realtime, acting and reacting with my thoughts and body at same time, all in that specific moment. It’s a live and alive intense process that occurs always in a present moment.

It doesn’t matter if the end result is meant to be a fixed work (as a photography or a film) or an open work (as when I do visuals for live contexts). For me, any creation, weather art or non artwork, or even the simple act of experimenting, is a performance, a dialog involving a response in a precise space-time, like I’m doing now in this interview. In a way, I see myself performing every day in whatever I might be doing including my day by day tasks: while I’m at home doing something (preparing a meal, gardening, art work) or in a live performance context. I see performance as part of my evolution and learning process as human being, part of the try and fail process, part of the path that takes me to a certain result. I guess life is a never ending show comprised of daily performances. 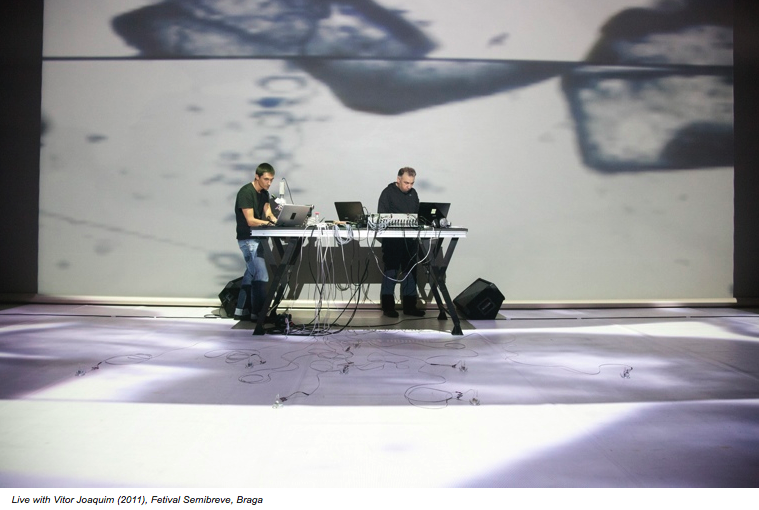 Ana Carvalho: Addressing aesthetics in your work, the result seems to come from permanent interconnection between media. For example, the sequence of photographs Dropfield (2003-2008) or the sequence Rennacs (2003) refers directly to video distortion, glitch if you like, and computer screen capture. It also brings to the fore simultaneous layers of connections, between techniques and technologies in the process of making. Could you describe further these connections?

Hugo Olim: Everything is connected! This sentence may sound a cliché but it is very true and I believe more and more in it. I try to see images (still or in motion) as an endless fractal pattern where I can create and regenerate them until infinity by using whichever tools, techniques or technology available at the moment I’m playing. It is more or less like looking at the images as a single atom or a pixel from where everything can be created and reorganized in many ways and patterns. Sometimes my aim is to freeze a frame of a film/video to make it last in time, to appreciate it just as a single image. With other images I want to give the ‘illusion’ of movement by playing with a still image, transforming it in different ways (could be still frames or photographs).

Movement in cinema is already an illusion, a perception and it doesn’t exist on the printed film surface. Film and video are made of still images, which are made of atoms or pixels. So, we are back to the starting point as everything is connected. Sometimes I want to go deep into it and zoom in the image to see its structure, its molecules… other times I just want to zoom out and have an overview of the whole (suddenly the Eames film ‘Power of Ten’ just popped up in my mind – it’s all there). Sometimes I want to still (and also steal) an image from a film/video, other times I just want to see them moving. All depends on the project I am working on or simply the mood of the moment. It’s a never-ending fun game in which we can play endlessly without getting bored. 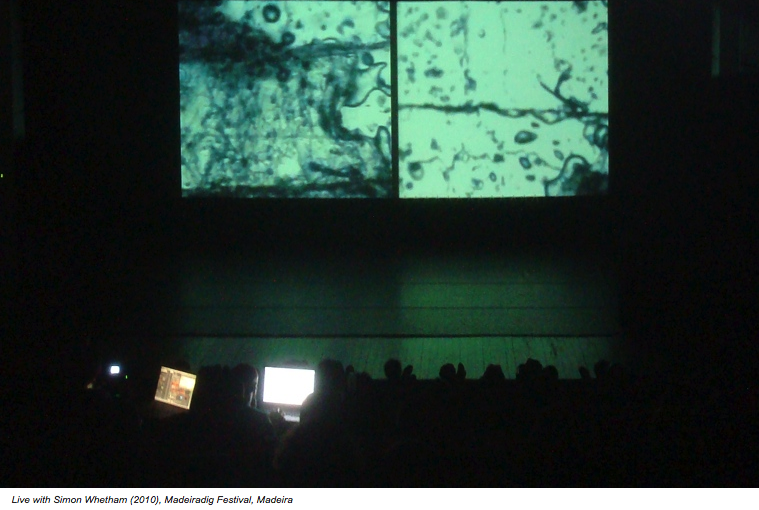 Something what really challenges me is doing this manipulation process in the most archaic mode, using less resources, less effects, less technology, equipment, etc; and getting a final result through a kind of natural process taking part of the characteristics of the material/technology/equipment. For example, Dropfield is a 2 still frames print. When you look at it, seems like I made a Photoshop composition with 4 images, but its not. The manipulation occurred because of an error that sliced horizontally the frame in 2 parts with different times on the VHS tape where the image was. I just had to still/steal that moment and print it, creating this lomographic looks. There is no software involved in this process.

Rennacs are scannergraphs made by using a flat scanner to distort and manipulate the image. Again, there is no software manipulation. The images were made during the scanning process. While the light of the scanner was moving I was doing all kinds of movements to the images sources (I used film, prints and TV screens). The scanner was built to scan documents/pictures in the most static way. In Rennacs the sources weren’t static at all. The final result is an effect of my performance during the scanning process. The scanner itself was creating the pictures, interpreting my hand gestures. In a way it was a kind of a glitch: I was corrupting the scanner’s program to create new images. In the end, you have a single picture as result of a moving performance. 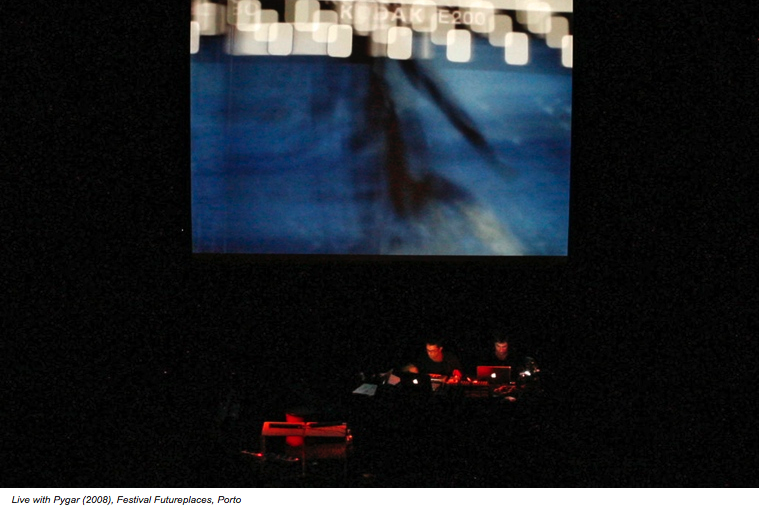 Ana Carvalho: To what concerns performance, how do you see yourself, as a VJ or live cinema performer? Has your concept or context as performer changed throughout your career?

Hugo Olim: I always saw myself as a live visual performer using both VJing and cinema technics and whatever tools I have at the moment. When I started, I tried to explore different contents, aesthetic possibilities and concepts in the live video performance context with two projects: Chiklet TV and Pygar. Chiklet TV was a solo VJ project focused more on clubs and DJ contexts where I was video jamming, mashing up and manipulating in realtime and in a free style with sampled loops from films, tv shows, internet videos, graphics, animations, etc. With Pygar, a project along with the musician João Ricardo (aka OCP), the concept and the imagery were completely different from what I was doing as Chiklet TV.

Pygar was more an audiovisual experimental and exploratory project where I was playing more abstract content trying to fit with João’s music. We were also playing in different venues, and for a different audience in galleries, museums and festivals. As Chiklet TV I could perform all night long between 2 and 8 hours in a row trying to connect my footage to the sound without having any kind of relationship, previous briefing or meeting the DJ. As Pygar the set would be maximum around 1h and although it would be a realtime improvisation the content and the concept was pre-prepared according to the project aesthetics.

In the last years I work more with musicians/composers/sound artists such as Vitor Joaquim, Simon Whetham, Nuno Rebelo, Jerome Faria or Madeira Classical Orchestra and not so much for DJs. For each of these artists I try to create specific imagery content, using different tools, software and performing in response to their sound, ideas and context. Therefore, the answer is yes. I naturally changed some of my concepts and context as a performer during throughout my career depending on the situation I was involved with. 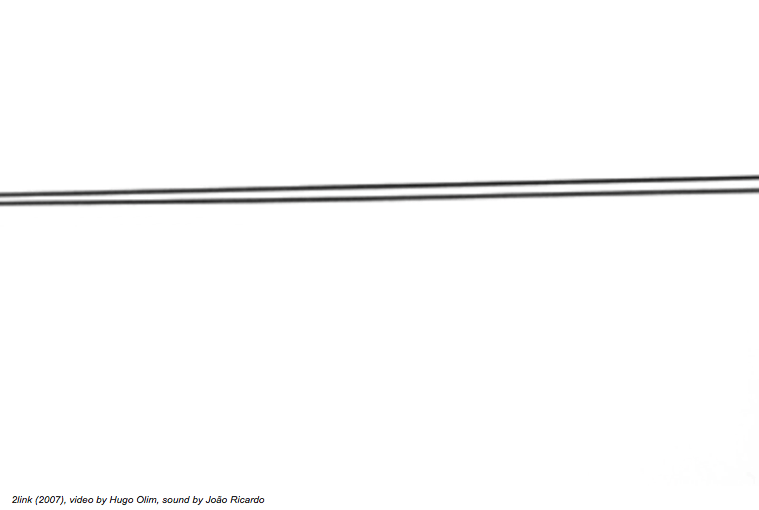 Ana Carvalho: It is apparent that the equipment you use to create photography, film and performance, haven’t been created for that purpose. You make an appropriation of its other possibilities, which are not the objective of its design, and this involves scanners, VHS players and also a pocket size microscope. There is an exploratory use of the equipment through its aesthetic possibilities. How do you see this misuse of equipment in relation with the working process and the connection with nature as process?

Hugo Olim: I always enjoyed to try and to explore different ways and tools for performance and image creation. I said tools but for me they are more like ‘toys’ that allows me to play and have fun, childlike. Subverting the equipment main functionality, exploring the error and not following the equipment programing or its own manual rules is something that I’ve been doing for a long time, since I’ve started creating images. The Czech philosopher Vilém Flusser has a nice point of view on this in Towards a Philosophy of Photography, a book where he compares the photographic camera to a toy ready to be explored in many different ways.

Sometimes I wish I could have more time to improve my skills on electronics and explore the equipment aesthetic possibilities through hacking and circuit bending processes. Also for live context, either from the point of view of the performer and the audience, playing with analogue equipment is always more fun and interesting than using only the computer. Combining both analogue and digital devices gives more freedom and open up to more possibilities. It is all about having fun exploring the nature of each device, its own possibilities, going beyond the initial programing limitation, building new layers and approaches of creation, seeing other ways of performing, (re)generating, transforming and creating new images contents wherever technology, equipment, tool, toy or image source you have in your hands.