The eleventh edition of the Netmage festival (Bologna, 20,21,22 January 2011) will present, in the historical castle of Palazzo Re Enzo, an unpredictable scenario of contemporary audiovisual research featuring: live media, live cinema, concerts, performances, sound and visual installations. Netmage festival, focusing on multi-media design, electronic arts and cutting-edge style, works as a meeting point for video-makers, multi-media and visual artists, musicians and performers from Europe, North and South America . In its ongoing investigation, Netmage presents some of the latest trends in live media. Together with research on essential aspects of perception and the intersection of visual and acoustic phenomena, the festival introduces a very wide 8range of approaches.

What remains, after a decade exploring the unique constellations, the thickening and blending of the geography of sounds and moving images; after wandering through the wakes of performativity, following ancient procedures of a floating audiovisual region in the edges of systems and disciplines?

Live media is a hybrid form: always instable, evolving and involving, expiring and inspiring; fragile yet constantly subjected to being questioned and stressed. Now is the time to verify the evolutions and reactions, the revolutions and delays: using matters, forms and techniques, and also going through the artists’ images and imageries. Above all, now is the time to question their meaning, when intertwined in such an exhibition/program (another hybrid that questions itself, urges and entertains).

Netmage 11 continues questioning the status of the image in the age of web culture. In 2000, when it all started, who would have thought how much it would have changed the world? The 2011 edition combines mushy shrubberies with glacial silences; tumultuous bundles with whip cracks… Amused clings, punches and knocks; whimsical audio-visual performances, and sequences of pure light and sound; devastated posttelevision slushes and synesthetic suprematist blusters; excursions on the vernacular tradition of Carnival and incursions on the never-exhausted architecture of hotel rooms, but also video and film, analogical and digital, folklore and religion, feast and fast. 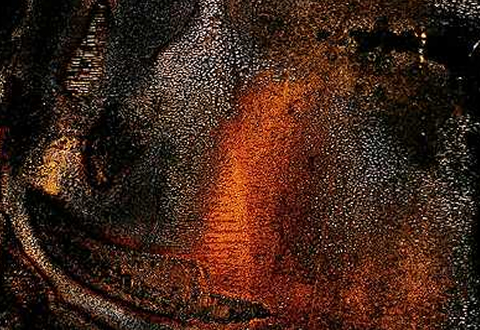 On second thoughts, these things are what pours and feeds the universe of the web: its humours and energy. We could have never nominated some of the things that showed up, such as the gambiarra, a Brazilian noun that describes the improvisation and reinvention of the function of objects and elements in the face of sudden, insurmountable problems. This also becomes the portrait of a world of the self-made, of techniques, instruments, both simultaneously inadequate and efficient, as in the Robert Filliou’s principle of the ready-made: «well-done, badly-done, not-done».

The problem is that we don’t trust technological revolutions anymore, and we fear finding ourselves in front of an immense accumulation of debris: ours, and that of our neighbours. What a great occasion to make art, and then stop and reflect. Once the process is clear – as suggested by Bulourde and Toulemonde – it makes no sense to continue producing ad infinitum, not even in the case of the cleanest digital elements. Our Inland Empire evokes a rather stray figure: that slightly gloomy Mute Dog battered yet proud of his incarnated energy, which Ries Straver unleashed amongst the stacks of an internautical magma. For sure someone will be stupefied.

Once again Netmage offers the chance to see where the assets of immaterial arts become the possible paradigms for the present, through challenging prejudices and surmounting disciplines. Netmage turns space into place. Such a place becomes utopic, produces kaleidoscopic visions and, perhaps, glares of possible futures. That could be more than enough for a festival. For us is not. Instead, we now want to create something else.

Netmage festival was conceived and created by Xing, a cultural network operating in Italy and abroad, with the purpose of planning, supporting and promoting products and events characterized by an interdisciplinary approach toward the issues of contemporary culture.