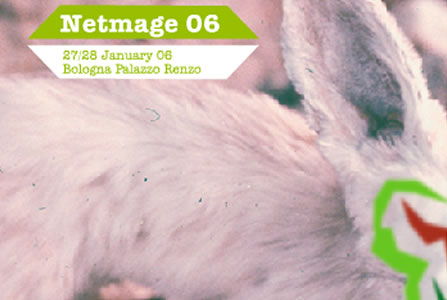 From the 26th to the 28th January 2006, during Arte Fiera, the city of Bologna will host the sixth edition of Netmage, an international festival aimed to explore media innovation within the context of electronic arts.

The festival, centered in the old castle of Palazzo Re Enzo, in Piazza Nettuno, will include an International Live-Media Floor, installations, performances, environments, a series of events featuring international guests performing live electronic music along with an innovative use of images, as well as afternoon workshops and meetings.

Following its ongoing investigation, Netmage 06 will present some of the latest trends in live media. Together with research on essential aspects of perception and the intersection of visual and acoustic phenomena, the new edition of the festival will introduce a very wide range of approaches and styles, from hybridization of acoustic and electro-acoustic to neo-punk and twisted synchretism.

Netmage festival was conceived and created by Xing, a cultural network based in Bologna and Milan operating in Italy and abroad, with the purpose of planning, supporting and promoting products and events characterized by an interdisciplinary approach toward the issues of contemporary culture.