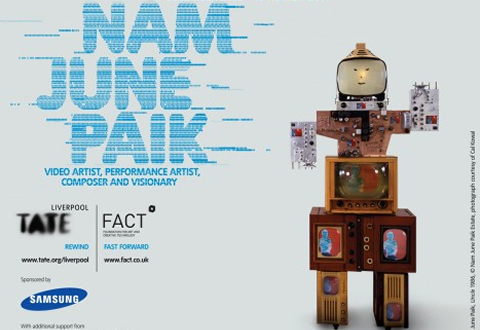 Media artist, performance artist, composer and visionary, Nam June Paik (1932–2006) was one of the most innovative artists of the twentieth century. Paik’s radical ideas on art and technology transformed what we now understand as video and media art. Renowned for his spectacular video installations and manipulated images of avant-garde performances, pop singers and television commercials, Paik paved the way for the sensibility of the MTV generation and YouTube phenomenon.

Tate Liverpool presents the first major retrospective since the artist’s death with museum kunst palast, Düsseldorf. The exhibition in Liverpool is the first UK exhibition of Paik’s work since 1988, and is presented in collaboration with FACT, Foundation for Art and Creative Technology.

At Tate Liverpool, the first part of this dual-venue exhibition showcases around ninety works from all phases of Paik’s career, many shown in the UK for the first time, alongside documentary materials from his performances and early exhibitions. The show celebrates Paik as the pioneer of media art. At a time when television was still a novelty, Paik foresaw the future popularity of this new and exciting medium. Thought-provoking works such as TV Buddha series explore cultural clashes between East and West, old and new, while Video Fish 1979-92, which features live fish alongside television sets, juxtaposes the natural and the technological.

Ranging from his early music performances and his involvement in the Fluxus movement to TV works, robot sculptures and large-scale video installations, Tate Liverpool’s exhibition takes a definitive look at Paik’s oeuvre. Prepared Piano 1962-63 and Record Shishkebab (Random Access) 1963-79 demonstrate Paik’s close relationship with avant-garde music movements, while works like Magnet TV 1965 and One Candle 1989 show the diverse trajectory of his electronic experiments. Paik’s collaborations with cellist Charlotte Moorman and artist Joseph Beuys are also prominently presented in the exhibition, with a rich selection of photographs and ephemera related to their performances and exhibitions. 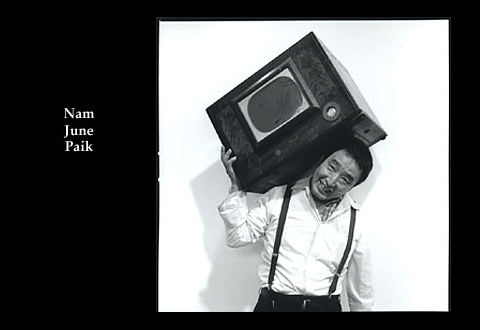 Paik continuously questioned existing notions of art and creativity, and tirelessly explored new and revolutionary ways of creating and appreciating art in a wider culture. Informed by profound knowledge and insight from Zen Buddhism to cybernetics theory, Paik created a uniquely non-hierarchical and inclusive vision of artistic creativity, and opened up the realm of art to the ever-changing world of cultural and technological innovations. Paik’s strong interests and involvements in electronic art and avant-garde movements can be found throughout the exhibition, representing all aspects of his experimental spirit that traverses his prolific career.

The exhibition continues at FACT. Focusing on Paik’s innovative use of technology, FACT showcase the major installation Laser Cone 2001-10, alongside sixteen single-channel video works, including Global Groove 1973 and groundbreaking satellite videos Good Morning, Mr. Orwell 1984 and Bye Bye Kipling 1986. Paik’s fascination with television stemmed from his idea of communication as a participatory ‘two-way’ system. In contrast with a widely accepted view of television at the time as an inherently voyeuristic medium, Paik focused on its democratic possibility of actively involving the public in the production of its contents.

For Paik, communication across the globe was one of the most significant impetuses for deeper understanding of different cultures and societies, and eventually for the peaceful and harmonious world order. His experiments with laser were the continuation of his life-long exploration of newer technologies. Highly technological yet extremely spiritual, Paik’s laser works clearly indicate his uniquely humanist approach to technology.