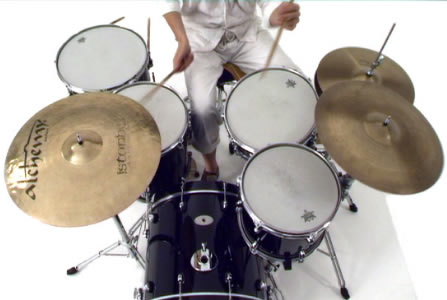 Musik für Barbaren und Klassiker breaks the traditional boundaries between concerts, sound installations, sculpture and music. The exhibition creates as such a place where the dynamic of exchange between performance and spatiality.

Els Viaene creates multi-layered musical scores that continuously call for new spaces. The Mamori Expedition Testbed is a scale model of the route that she followed in the Amazon forest to record the natural soundscapes of the environment. Spectators of the exhibition can rediscover the original sounds and by using a hydrophone mix their own auditory trail.

Composer Stevie Wishart combines sound techniques from the Middle Ages with the latest techniques and technologies. Together with Yvonne Mohr she made The Sound of Gesture, a video and sound installation that was included in the Institute for Music and Acoustics at ZKM (Karlsruhe). As the musician plays violin, movements of her hands are detected via small sensors. This data is converted into new digital sound textures, and as such the original sound is altered.

Artist and musician Sean Dower examines the sculptural dimensions of film, photography and sound. His work often exudes the excitement and adrenaline of a live-moment. The video Automaton shows an intriguing interaction between an improvising drummer and cautious movements of a camera that attempt to scrupulously capture the inspiration of the musician. In addition, he also shows two new works. 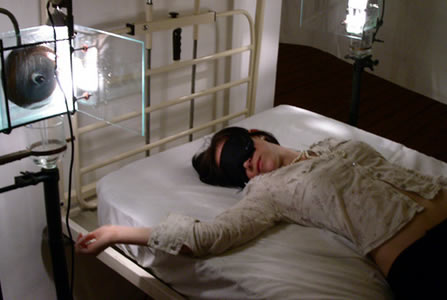 In his oeuvre, Joris Van de Moortel confronts creation and destruction. The oscillation between destruction and protection, between breaking and shuttering, gives his work a strong autonomy. In his sculptures and installations he often incorporates elements referring to the world of noise and DIY: drum kits, amplifiers, record boxes and recording studios.

The Ultrasound of Therapy from Staalplaat Soundsystem is an installation-as-a-whole, built up as an infirmary. In each of the beds the visitor undergoes an individualised sensory processing. Highlights are the meditation videos, the beds connected to bass amplifiers (which intensify the physical experience of sound), or the treatment with sine waves, based on the Indo-Tibetan vadacakra theory.