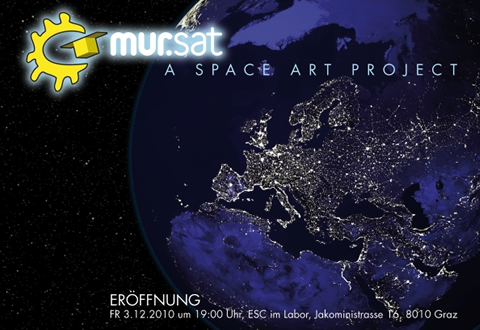 In 2011 mur.at will launch this satellite. Interorbital Systems offers its TubeSat personal satellite kit for aprox. USD 8,600 (launch inclusive). The satellite will occupy a LEO for a couple of weeks before burning in the atmosphere on reentry.

On October 4th 1957 the first artificial satellite – sputnik 1 – reached its orbit and flew around the earth in 98 minutes. During his 3 months existence, thousands of people directed their eyes and ears towards the sky to join this adventure. Today, more than 50 years later, swarms of satellites inhabit and populate the outer spheres of the earth and further away. No matter, if we want to know, where we currently are located, or where we should move to reach our destination, if we chose out of 700 TV- or 1200 radio stations, or if we want to have the next weather forecast – there are always satellites involved. Satellites have become a stable factor in our daily life information system. And of course there are more, thinking about espionage, guided missiles and that type of stuff.

In the timespan of one century, the space outside earth has been integrated smoothly and without friction into economic utilization processes. In order to counterbalance economical procedures that have been employed in the exploration and investigation of space, we vindicate the right to explore and investigate for ourselves. We claim ‘the’ space as ‘public’ space, in which other projections, wishes, concerns, desires, purposes and undertakings of different matter have authority and entitlement. With the move out into space, mur.sat takes the opportunity to analyse earth from outside. With the development of TubeSat, it has become relatively easy and affordable to send out our own research devive. Adding some technical know how, we are able to define a set of tasks that mur.sat should fulfill during his short life time. In some ways, this current situation now is comparable with the 1980ies, beginning of 1990ies, when artists experimented with connected computers, what is now mostly known as world-wide-web/internet.

The excitement is found in exploring new spaces, and getting to know and understand them. Probably one of the main attractions lies in the fact, that in unknown spaces one can formulate new hypothesis and try to find out and explore by one’s own wish and curiosity. The strength and empowerment that lies in this possibility, is the subjective approach of individuals – noone can say beforehand if a certain question is relevant. It is also very likely that new questions will come up due to intense work on the matter during the work itself. 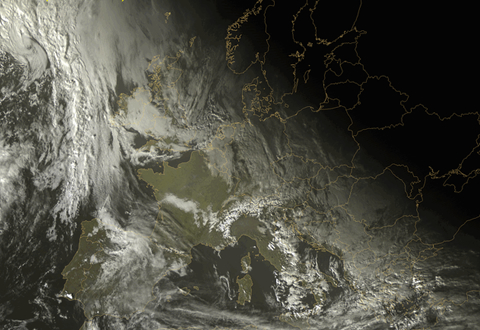 The communication between mur.sat and earth will be solved via 2.4GHz radio. As the signals of mur.sat will only be available for very short time periods on one spot, we will need a dense global GroundStationNetwork of sender/reciever stations. The single station should catch and collect the signal snippets and transmit them via Internet (TCP/IP) to the mur.at space center in Graz. The thereby originating art piece will be visible in the Graz space center and online; of course all data will be available online and for free, published under a fitting GNU public licence that will ensure access to durable open public data. After a few weeks – probably 6 to 8 – the satellite will burn up during its re-entry in the earth atmosphere.

Before mursat is sent to its LEO (lower earth orbit), it will be shown, in an exhibition taking place from December 3rd to 17th 2010 at ESC im LABOR, Graz. Until the end of the exhibition, the satellite’s functionality will be fixed. With an additional payload of only 200 grams, we have to focus on a certain range of possibilites.

Currently, the options are:

– listening to the complete radio spectrum, recording it and streaming it back to earth
– mount a loudspeaker outside and send message into space
– mount a microphone and listen to space and stream the sound(s), the silence back to earth
– have a webcam take pictures and send them
– led-lights sending messages to earth
– led faxing
– scanning for trash
– have a sensor mounted that ‘understands’ mursat’s position in relation to earth and have that data sent back.

On earth, in the space center in Graz, and optionally on all other sorts of locations, available data will be received and interpreted, in sound, light, temperature installations, to create his sensation of NOW, of present time, and of connectedness to this expansion and extension that surrounds us. Why should only economically potent entities like states or companies be entitled to develop the imagery and broadcast (and thereby define) the ways of perception of the outer world, and of the representations of earth and the universe?