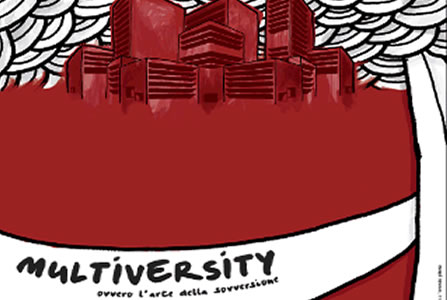 The event “Multiversity, or the Art of Subversion” is the fruit of a joint effort between Uni.Nomade and S.a.L.E. (Signs and Lyrics Emporium), between a trans-territorial network of militants and researchers carrying out a critical analysis of the themes of contemporaneity and a self-managed space, called S.a.L.E. docks, born a few months ago in Venice so as to intervene on a practical level in the world of cultural production. A world which, not only in Venice, has affirmed itself as preferred area for current capital valorisation processes.

In fact, if we concentrate on contemporary art, this undoubted importance can be seen on at least three levels. The first is the central role which immaterial assets and knowledge, creativity and affections, relational and communicational talents assume for contemporary forms of production: artistic production cannot get away from this centrality.

The second is the relationship between cultural production and the metropolis where the interlacing between town-planning and architecture, fashion and design, art and literature, in that productive social space par excellence  the urban basins  becomes on the one side a crucial element in the process of subjectification through which are built the multiplicity of forms of life which inhabit it, to the other decisive factor for defining the strategic positioning of each metropolitan area in the economic competition between global cities.

The third is the relationship between the art market and the financial capital: at a global level, banks and multinationals are the among the main investors in a sector which today seems to be the only one to have not been even slightly touched by the crisis which has overrun the world system of money circulation.

What we are now seeing is a complex capturing system, which capital has brought into play in the multiple flow of informal cultural production, from the appropriation of the ability to cooperate of individual intelligences and individual ways of life, to ensure the valorisation of what has been defined as the “symbolic collective capital”.

The complexity of these dynamics depends on a double mechanism of exploitation, where the first aspect is made up of the barriers of intellectual property and from each further moment of private appropriation of general social knowledge, while the second is the parasitic rapport which is established towards the creative production by those speculative interventions occurring in the body of the metropolis, there where state and private institutions, large events and art fairs, and cultural zones and meta-zones are established.

Where S.a.L.E.’s experience wants to immerse itself critically, what the Multiversity event has decided to face, is called “culture factory”, that is the place of valuation of cognitive capitalism, but it is only so in the measure in which it, before anything else, the place of creative subjectivity, of the expression of the multitudes, and consequently, the space of a face-to-face between creative freedom and autonomy of cooperation on the one hand, and the system of dominion and exploitation of this productive force on the other.

In this light, Multiversity, will present, discuss and compare, with the most advanced European and global experiences, the first results, although partial, of an enquiry on the city’s job insecurity linked to contemporary art and intangible work. Here the main question is to understand widespread behaviours and the methods of intervention which could change a social composition, already central in the forms of contemporary production, in a political composition. Examined also will be the core issues of the role of university training on the one side, and the communication network on the other side, played within the most complex organisation of the work of the “culture factory”.

An indispensable requisite for this discussion is the comparison around contemporary art understood as a “wider social institution”: from the historical-artistic events which drove art in the post-war period from the transcendental space of medial specificity to the social space with its relationships of strength, to the relationships established between art, social movements and cultural activism outside of any avant-garde rhetoric, to the methods of capture by the institutional artistic system and by the financial ciruits of a vast heritage of critical thought and conflicting ways of life. For these reason, the Multiversity event will be organised into three seminar sessions: 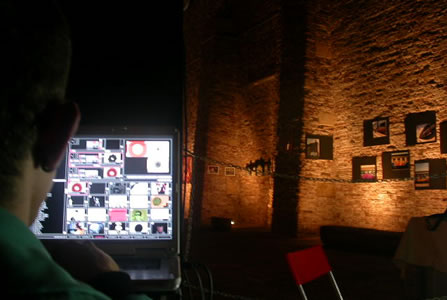 This means problematizing historical events and contemporary forms in the interlacing between art and activism. Some of the questions to start off the discussion will be:

Which road was travelled to reach the conception of the work as transcendental to a conception of the same as object, process or dynamic able to intervene within man’s space-time and subsequently, within social processes?

How did we go from a judgement of the work based on a topography of its material characteristics to one based, instead, on the analysis of its function, or even its efficiency in social terms?

How does it function today, in this post-Ford era, activist art? What, once all avant-garde rhetoric is abandoned, is the position of art and artists with respect to movements?

2. Art and the market: between creative freedom and financial capture

This second point must necessarily move from gathering date on the size of the art market and its relationship with financial capital.

Art is taken here as an example of paradigmatic value because of the extreme paradox which affects it: if artistic work expresses a maximum level of creative freedom, at the same time it is subject to maximum fixation within the financial capital.

3. Art and multitude: for the survey into social composition, conflicts and organisation of live work in the “culture factory”

This session will examine the core of the relationship between singularity and multitude, and between individual production and construction of the common. There are two research plans which will proceed in parallel.

The first is historical-artistic and concerns the attempts which, starting in the 60s, were developed by artists in response to the rhetoric of the individual genius, up to the current platforms of collective production tied to the affirmation and diffusion of social hacking.

The second plan concerns the survey into social composition of precarious workers which has grown around the culture industry’s drive. From the students in the training circuits to temporary workers in the cooperatives for logistics and stage design, trainees, networkers, project consultants, freelancers, to that global class of artists and professionals intent on becoming an integral part of the international art system. In all this wide social galaxy, we will need to investigate the material conditions of life and work, needs and aspirations, desires and possible assertions. .