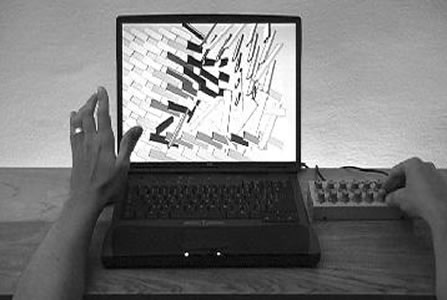 MULTIPLACE is a distributed network of people and independent organizations dealing with the interactions between media, technology, arts, culture and society. Activities of this network culminate this year in the 6th annual festival that takes place between April 13 and 22, 2007, in 10 cities and 6 countries simultaneously. Around 70 different projects are being organized around the framework of the festival – workshops, installations, discussions, concerts, performances, exhibitions, presentations, screenings, streaming or parties, and also live streaming from different locations through the internet.

This year’s new definition, Network Culture Festival replaces the focus on “new media culture” in order to more accurately define the festival’s emphasis on networking collaborations and related inspiring possibilities. Since the festival is an open structure, there in no exact number of events and thanks to the “floating” part of the program called “Jump Into the Network“, it is open to your participation. Jump into the Network is an interactive part of the program. You can join, via the Internet, a series of psycho-geographical games created by the Romanian association AltArt, take part of one of the workshops, bring your old computer to be recycled, or offer your talkative parrot for Internet discussion. In both Bratislava (SK) and Brno (CZ), there are also platforms for the realization of your own projects.

In Bratislava, there is a festival Infocentre at A4 – Zero Space with information and daily public events (www.a4.sk). Young designers in their Open Design Studio present work on topics like collaborative design, DIY magazines and give you personal advice about your visual communication. You can also take part in discussions about the state of the internet in Slovakia , or about phenomena like Web 2.0 or Second Life. A4 also features screenings, hardware workshops, as well as evenings of the electronic music festival, “Unsound on Tour Across Borders”, that will also stop in Brno and Prague .

Additionally, in Bratislava, there is the opportunity to see the video installations of Nora Ruzickova in the 13m3 Gallery and to visit artists’ studios and design studios such as OST-960 (of artist Erik Binder), STUPIDesign and Kamikadze. There are screenings of films awarded Prix Ars Electronica and YouTube, Machinima films, concert by the Polish experimental sound group Karbido in Kosice and Zilina. In Trnava, there are lectures connecting science and art, talks on non-conventional music and video presentations.

In Brno, there is another Festival Infocentre and concerts at the Faculty of Visual Arts at the Technical University, as well as workshops, discussions, live presentations, a radio show, video installation, parties, ‘chill out’, and open platforms for your creativity. Visitors in Budapest will have the opportunity to see a screening of films related to architecture, as well as presentations of VJs, Polish Kiecle presents light sensitive installation and video screening and in Providence, ( Rhode Island , USA ) the RISD Museum offers screenings of New Central European video art.

There is also a couple of “matches” going on – in the radio space between Czech and Slovak radios, and between different young artists from various “competing” art schools taking part on billboards.