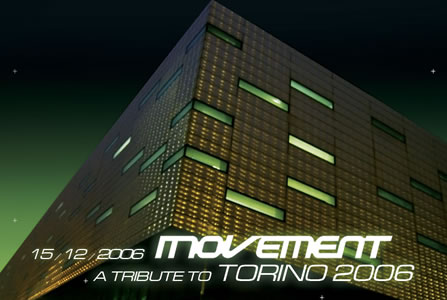 For the first time since the Olympics, PalaOlimpico Isozaki hosts a dance event open to the public. Thousands of people are expected for this international-caliber event: MOVEMENT is the chance to celebrate the music and the city of Turin, as the year 2006 –year of the 20th Winter Olympic Games– draws to an end. This will be the first edition of a project that hopes to become a regular rendezvous with the city.

The event was granted its name by the electronic music festival born in Detroit in 2000 to celebrate the city where techno music first saw the light. All hopes are that Turin – as Detroit, much more than a “motor city”– will keep up the Italian edition of the festival. With sounds echoing the Detroit Music Festival, the event presents two guests of utmost respect, fathers of techno music: Derrick May and Kevin Saunderson.

The mix of music and visuals, blended in the unusual, captivating location, suggests a direct assonance with the atmosphere and experience of Sonar the Noche, the night side of Barcelona’s festival, the electronic music event par excellence. The futuristic staging and décor act as backdrop to the different moments of the all-night music non-stop. To celebrate the end of a year characterized by hystoric events, Turin will welcome, in a setting that stands as a symbol of the city’s evolution, two artists that revolutionized the electronic music international scene: Derrick May and Kevin Saunderson, for the first time together in Italy, will take turns at the console of PalaOlimpico’s foyer.

The electronic-tuned soundtrack of the last twenty years begun in Detroit: a project signed by Atkins, May, and Saunderson. Derrick “Mayday” May founds, in 1987, Transmat Records, and publishes the first house music productions, revealing to the world the new sounds of Motor City. With him, Kevin Saunderson, the man who took Detroit’s sound to clubs all around the world. Together, in the 1980’s, the two artists gave life to a unique music platform, giving life to a new, technological sound: a mix of Afro-American rhythms, electronics, and funk. From that moment on Detroit was not just the capital of the American car industry, but also the hub of an unprecedented musical phenomenon.

The duo will be joined by leading DJ’s of the Turin electronic scene. Lorenzo Lsp is one of the founders of Latin Superb Posse, and the mind behind the first ‘house night’ in Turin (Studio 2). In his set, disco-funk-punk-electro-deep-acid influences are mixed in a sound characterized by basic bass lines and rhythms influenced by the latest digital sounds. Federico Gandin, resident DJ of the famed “La Tana@Fluido” night, has been always active in the spreading of Detroit-made techno with his energetic sets: lots of drums, funk, and circular loops. Choreographies will be performed by the outstanding artists of Turin’s Scuola Cirko