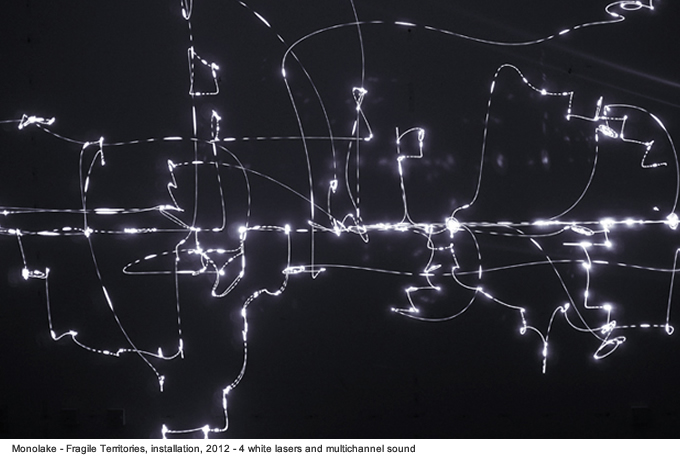 Everyone knows who is Robert Henke, German electronic musician and software engineer also known for being the creator of the project Monolake, a duo born in 1995 in Berlin, together with Gerhard Behles, first, and Torsten Pröfrock (aka T++), afterwards.  But Robert Henke is much more than Monolake. The artist currently manages the labels Imbalance Computer Music and Monolake/Imbalance Computer Music.

He also developed two versions of a MIDI-controller interface called Monodeck (I and II) for editing and effects control during live performances, as well as Ableton Live which basically allows a more structured and instrument oriented live performance, enabling the musician to react to the audience and play with much more freedom during a concert.

Recently Robert Henke realized a new CD, Ghost, issued in 2012, an album where artwork and sounds are mixed in a music record to be discovered. But the artist is also focusing his musical research on ambiosonic and acusomatic concepts, exploring the definition of space and its interactions with sounds. This is why he introduced visual elements in his live concerts, especially in collaboration with the artist and programmer Tarik Barri. 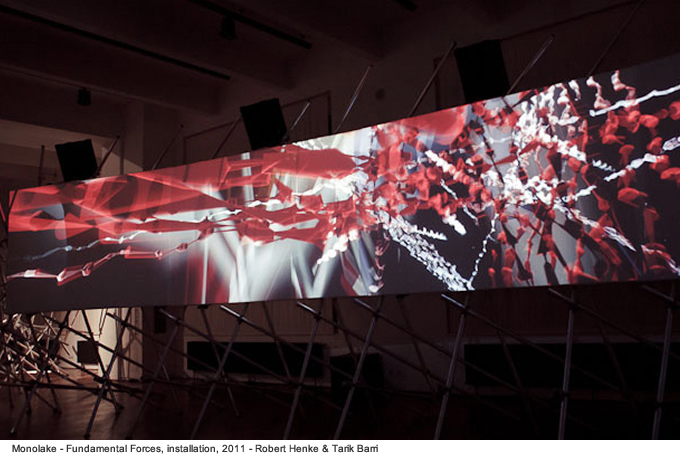 Henke’s concept of live performance includes the creation of audiovisual installations, like Fundamental Forces 2011 project realized together with Tarik Barri and presented, among others at Transmediale 2011, where the focus is put on movement, acceleration and the interconnections and attractions between visual structures and sonic events. Fragile Territories, another audiovisual work whom exhibition is scheduled for November 2012, is based on a laser system that projects objects in a dark room. The light shapes float, move and change its light intensity. The interaction of light and sounds is shaping multisensorial objects.

We contacted Robert Henke as we wanted to ask him some questions about his work and artistic activity.

Silvia Bertolotti: Which is the specific idea behind the installation Fundamental Forces and how did you come to the concept of this work (http://www.monolake.de/installations/fundamental_forces.html)?

Robert Henke: The work is technically based on a 3D visual engine Tarik Barri is developing since several years now. Objects can be placed in a virtual space and moved around. The objects can be transformed and shaped in many ways. Fundamental Forces is an exploration of the possibilities of that visual engine, based on an artistic interpretation of basic ideas of theoretical physics. 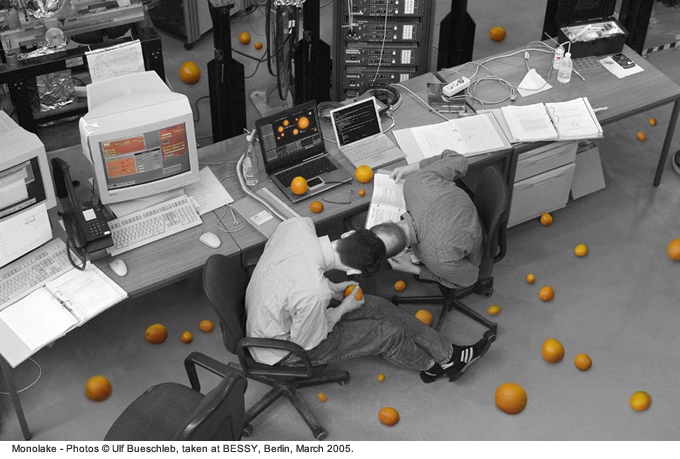 Silvia Bertolotti: What is the nature of the ‘forces’ that you aim to show in this work?

Robert Henke: In particle physics, the world is described by four different fundamental forces: gravity, electromagnetism, the strong nuclear force and the weak nuclear force. There is the idea of finding a universal model that would help to explain ‘it all’ and unifies the fundamental forces, however, this turned out to be incredibly difficult.

Silvia Bertolotti: Which do you think is the relationship between the physical phenomena and technology?

Robert Henke: Technology is applied physics. That’s one of the reasons why it actually pays off to invest a huge amount of money for theoretical physics. If you put in a few billions in experiments at CERN or other research facilities, the spin off might be faster computers, faster network connections, technologies that use less energy for the same task than current technology and all kinds of things. It is no co-incidence that the web as we know it now has been conceptualized at CERN.

Silvia Bertolotti: Speaking about technology, since during your career you both created tech tools and music, what do you think is the main challenge nowadays technology has to face, in general and in the specific field of artistic creation?

Robert Henke: For an artist the big challenge these days is making the decision about what technologies to use and what to leave out. There are so many exciting topics that one cannot get all things at the same time. So the real skill is to ignore part of the possibilities technology offers. 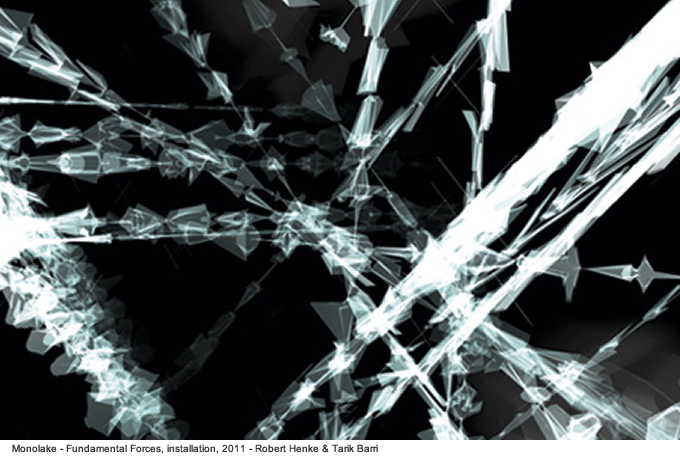 Silvia Bertolotti: Talking about music, you both create recorded music and you perform concerts. How in your opinion computer music specifically can adapt to an audience during live shows? I know that you approached this issue in your essay “Live Performance in the Age of super computers”, but in this particular moment, what do you think is the main challenge of computer music towards live performance?

Robert Henke: I feel it is now really about refinement. We know the basics, so let’s figure out in detail what works and how. What kind of control is exciting, what kind of manipulations make most sense. It is now more about artistic questions and not so much anymore about technology. We are post technology.

Silvia Bertolotti: In this sense, what is the role of the tool Ableton live?

Robert Henke: The big change Ableton Live brought to the performance world is the liberation of structure. Performers cannot only decide what to play and how to articulate what they play but also when the play things in which order. This is very essential. The ideas for this came from using drum computers as small sequencers. We wanted to be able to improvise with computers and linear editing does not very much fit to this idea. 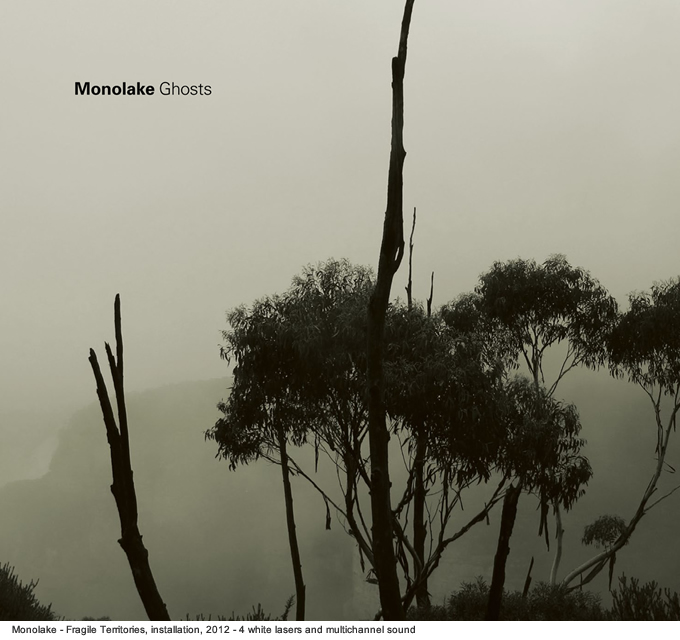 Silvia Bertolotti: What is the meaning of “ambiosonic art”? How do you see the relationship between sound (a temporal element) and images/vision (spatial elements)? I refer also to the use of visuals during live music performances in your collaboration with Tarik Barri.

Robert Henke: It is all about defining spaces. Music defines emotional spaces, images define spaces in a different way and real spaces in which music is performed contribute to the overall experience too. Including a visual element and surround sound means gaining more control over the experience. And this is what counts in the end; providing the audience with a remarkable experience.

Silvia Bertolotti: Getting back to recorded music, which is the creative process for that? What is it in particular for your last CD Ghost? How does technology intervene in creativity?

Robert Henke: There is no recipe; every track has its own story. Sometimes I have a very clear idea in mind, sometimes it is a technical detail, sometimes I come across an interesting sound whilst experimenting. Technology helps me to produce ideas fast, to get a great variety or results, to record those results quickly and to enable me to shape the results of those moments further with a huge degree of freedom. There is almost nothing one cannot do with audio, the limit is the imagination. 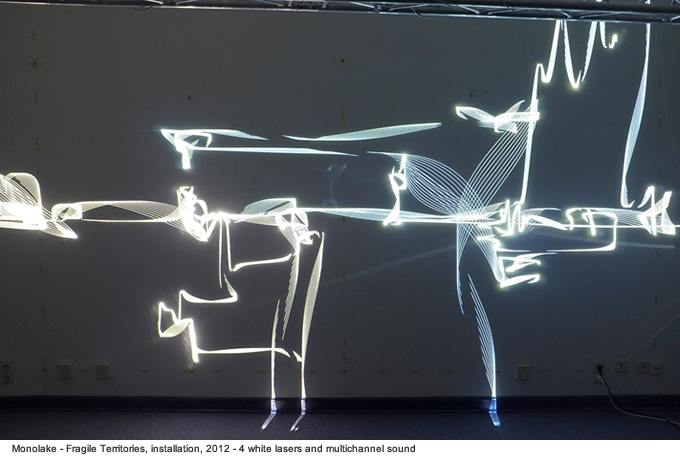 Silvia Bertolotti: Could you anticipate something more about your new installation Fragile Territories that will be presented in November 2012 (http://www.monolake.de/installations/fragile_territories.html)?

Robert Henke: Fragile Territories is by far the most ambitious work I have done so far, an installation for four white lasers and sound in a huge space in Nantes, France. I basically paint a big and constantly changing abstract figure on a twenty-four meter long and six meter high white wall. And of course there is a sonic component to it too. I attached a photo of one of my initial test with one laser…