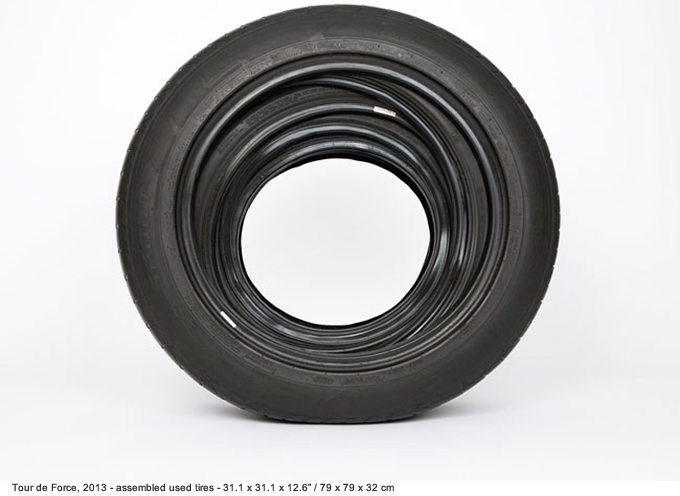 Retooled Appliances is the first solo exhibition in the United States by artist Michel de Broin. Based in Montréal, de Broin is the 2007 recipient of the Sobey Art Award, and is best known for interventions and his re-functionalization of utilitarian objects.

Rooted in conceptual premises, de Broin’s work generates unexpected levels of complexity from found objects and physical juxtapositions. Established modes of signification are left behind, yielding retooled technological environments and new possibilities for public space. At times, his ingenuity can be nearly indiscernible upon first glance, appearing as a puzzle for the viewer to complete.

For example, “Shared Propulsion Car” is a human-powered 1986 Buick Regal that de Broin modified furtively. During the Exit Art biennial in 2005, this revolutionary work was driven through Manhattan, presenting challenges to mid-town traffic, despite its petrol-free combustion.

In Oh Canada, a recent exhibition at Mass MoCA, de Broin’s “Tortoise”  consisted of standard picnic tables – an immediately recognizable representation of North American leisure culture – as building blocks to construct an elaborate fort. In 2011, during the New Orleans Prospect.2 biennial, de Broin harvested street lampposts that were uprooted by Hurricane Katrina, and reassembled them around a new core made from steel. “Majestic”, the omnidirectional and illuminated structure, was designed to challenge the urban landscape’s horizontal and vertical forces. It has since been acquired by the National Gallery of Canada. 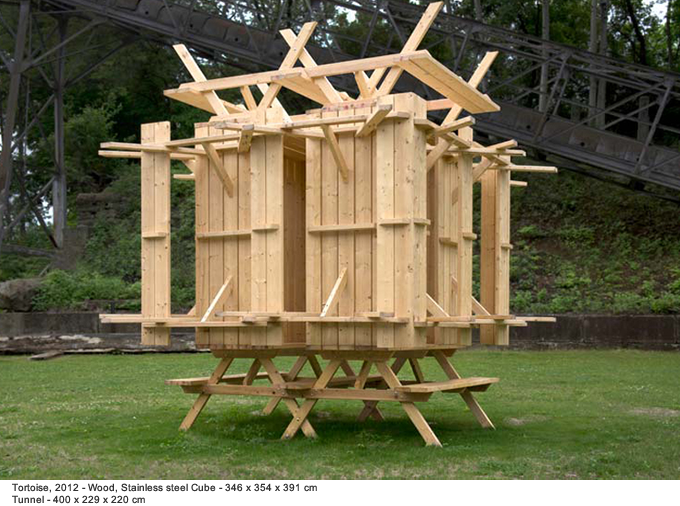 Other notable works de Broin has presented in the US include two refrigerators at Eyebeam that he sealed together for the purpose of an icy romance, breaking the solitude of each machine’s cavity. His first exhibition in New York took place at the Center for Curatorial Studies, in a master’s thesis exhibition organized by Dr. Sarah Cook, where de Broin investigated the entropic loss produced by red wine in an electric circuit.

De Broin has exhibited widely in Europe and North America. The first mid-career institutional survey of his work was mounted by the Musée d’Art Contemporain, Montréal, earlier this year. In 2014 de Broin will unveil “Mehr Licht”, a newly commissioned 20-meter installation for the Marie Elisabeth- Lüders-Haus in Berlin, at the Bundestag federal parliament.

The exhibition at bitforms gallery features five pieces. Ranging from assemblage to video and photography, these works explore notions of the technological unconscious, as well as resistance and entropy. All studies of physical potential, these works are imaginative and challenge the utopic or authoritative conventions associated with technical progress. Using recursive systems, de Broin disrupts the function of everyday mechanisms and objects. Asymmetries are created between cause and effect. Crafting new relationships between waste, productivity, risk and consumption, de Broin delves critically into Lewis Mumford’s social philosophy of megatechnics.

The earliest work in the exhibit, “Keep on Smoking”, is an augmented bike inspired by the artist’s observation of a man smoking cigarettes while cycling. The bicycle transforms kinetic energy that is produced by its rider. Powered by a renewable source of energy, the cyclist’s will, a custom generator transforms this physical effort into electric current, which activates a smoke machine. In “Smoke”, a video that captures the sculpture’s surreal ride through an Estonian cemetery, a wispy trail of vapor is discharged from the exhaust, startling bystanders with its unexpected emissions and the contradiction in propulsion. The project is a marriage of two machines: one that produces, while the other consumes. Their “copulation” generates smoke, which escapes freely into the atmosphere. 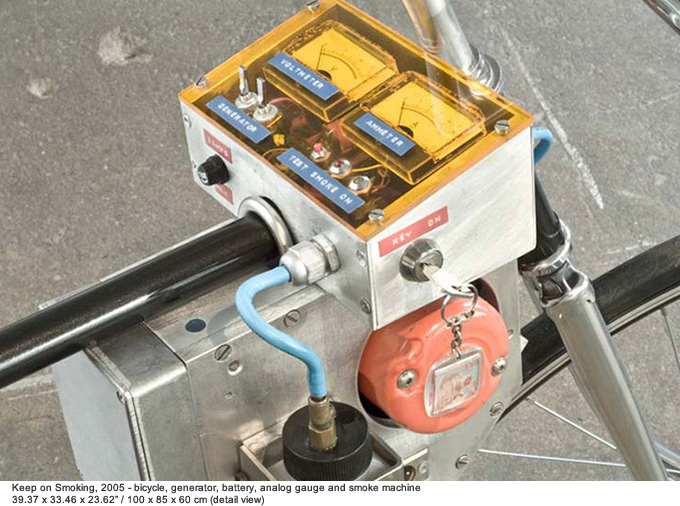 “Overpower”, de Broin’s latest work to date, playfully examines electrical energy as metaphor for the technological unconscious. A small bronze cast figurine, a knight bearing a sword, pulses with 10,00 volts and ignites a broken household light bulb. Sparks fly as the characters fight off obsolescence, in an age-old battle between faith and reason. Based on the assumption that there are more street lamps in our urban life than trees, and the photograph “Pile” features a lamppost cut into logs, assembled in a wood cord.

“Tour de force” consists of five used automotive tires. Forced inside one other, the tires are condensed into an extremely reduced space. Their physical density forms an accumulated mass that suggests a peculiar re-invention of the wheel. Approximately 280 million tires are discarded by American motorists each year.

A fully illustrated exhibition guide is available at the gallery and online. Copies of de Broin’s new catalog published by the Musée d’Art Contemporain, Montréal, are available at the front desk for $30. 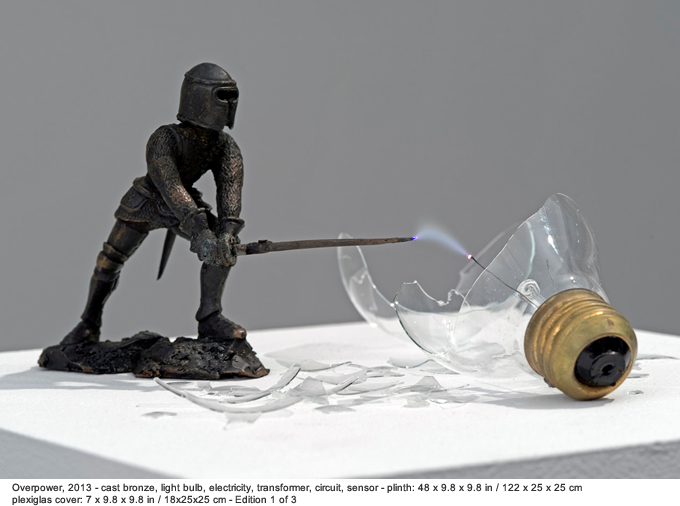