Meta-Interview. A conversation with Robert Wechsler 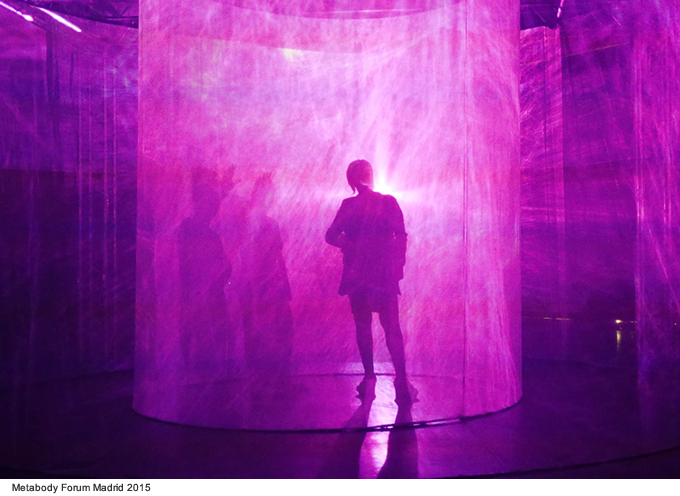 Coordinated by Spanish artist Jaime de Val/ Reverso, Metabody is a 5 years project supported by the European Commission and featuring 38 partners from 16 countries. One of its main objectives is to subvert Information Society’s current tendencies of cultural homogenisation and to propose alternatives through the production of new kinds of media that highlight the diversity of bodies and contexts, addressing the importance of non verbal communication and embodied expressions.

The project is therefore undertaking a critical study of contemporary aesthetics of control, in which quantification of all activities via reduction to information patterns permeates all areas of life, reinforcing a regime of control.

Since 2013, Metabody is developing technologies, tools and techniques at the convergence of the arts, that will be integrated in the first fully interactive architecture that will be touring throughout Europe in 2017-18. For this pavilion, well known intermedia artist Robert Wechsler from Palindrome Intermedia Company is developing an interactive installation called Meta-Interview. 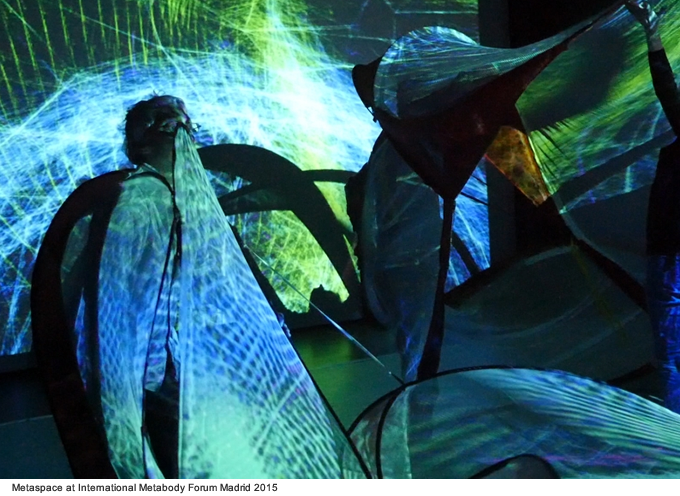 The German American-born inventor – as he likes to be called – has been making music controlled through movement since he was a teenager, even before the advent of Computer Age. Highly influenced by John Cage and Merce Cunningham, with whom he took classes in New York for ten years, he founded Palindrome Dance Company in the 80’s and toured extensively across Europe.

Then he met computer engineer Frieder Weiss and together they developed computer-based systems for interactive dance performance, such as EyeCon motion tracking software. Since then Robert has been continuing creating choreographic works, teaching and writing, focusing more recently on inventing devices for people with disabilities that turn movement into music.

I had the chance to meet him during the International Metabody Forum that took place in Madrid between last 1st and 25th July, so I asked him a couple of questions about Meta-Interview, his latest performative installation.

Vanessa Michielon: How did you get involved in the Metabody project and how are you contributing to the development of this Metatopia vision?

Robert Wechsler: In Germany I have a company – arts organisation I guess is a better term, since it’s not a steady company – called Palindrome Dance Company, which was eligible to be one of the partner organizations in this consortium in this EU project. Since I have so much experience with sensors and interactive stuff, Jamie, the director, had heard of me and asked me to help write the grant.

At that time I was busy with this project with people disabilities, so I wrote into the grant this idea that the Metabody project would have a special focus on people with disabilities, including them in what we do, so that they do have the ability to express themselves through movement. This is a segment of the population that is often limited in their communication ability, particularly in their expression ability, which to me means especially emotional and artistic expression.

Vanessa Michielon: Can you talk about the installation you are developing for the Metaspace?

Robert Wechsler: The installation we are now building for Metabody – I guess we are calling it Meta-Interview, an interview experience – it’s an intimate conversation of two people, but rather then involving words it’s using movements, musical sounds composed by Pablo Palacio and three tracking systems. One is looking for discrete gestures and movements, and the most common and the easiest one to measure is the blinking of the eyes because almost everyone blinks their eyes regularly and it’s discrete, having a clear beginning and end. So if you blink your eyes or make a gesture with your mouth, you can make a sound in the environment.

The second interaction is movement of the hands, head, body in space, which are sending a continuous signal. The third is physical touch between the interviewer and the interviewed. The first one is Boolean, the movement is a variable, and the third one, you might think it is Boolean as well, but the technology we are using allows also the “almost” touch, the proximity. As you approach each other there is a kind of build, so the touch releases that build and if you have a sound of the “almost” and a sound of the “touch”, that’s a powerful experience. 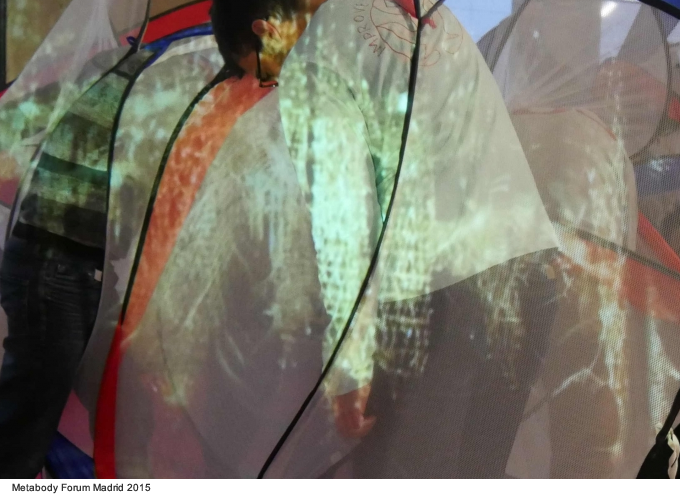 Vanessa Michielon: So how does the movement tracking work for the three systems?

Robert Wechsler: The eyes, mouth and body movements are tracked with a video camera, therefore we have two cameras, one for the interviewer and one for the interviewee. We are still experimenting with the technology for the touch, but it’s an electrical signal that the body sends, perhaps working with the chair you are sitting in, which makes contact through your body sending electrical signals which then interact with the other person. There are a number of technologies we are exploring at the moment but this last feature is not operative here in Madrid yet.

Vanessa Michielon: So what have you been focusing on during this Forum and what are you particularly interested in testing?

Robert Wechsler: Here we are only experimenting with the video tracking and with sound and lights. Many people use video projections, as I did with my company for many years, and then about 7 years ago I completely got sick of all video projections and in a sense I broke with many choreographers working with technologies. The thing about visual experiences is that we tend to understand them more easily then acoustic or oral experiences, in a sense that we might be perfectly happy to have music as something we just feel but then when we deal with visual experiences we are more willing to understand them.

So in the case of movement making sound it’s not always that obvious and clear, even in this very simple task of blinking, therefore I had the idea that a light cue could be a more clear signal that you have done something special. Slight shifts of the colouring of the light might make the interactive experience more readily available and palpable. We are not sure, we haven’t really proven it yet…

Vanessa Michielon: Actually when I was experiencing the installation for me the sound was much more powerful and readable than the light, because I was so narrowly focused on the other’s eyes that nothing else was really entering my visual field…

Robert Wechsler: Yeah, it almost contradicts what I was saying, but we are still experimenting with that. For instance, here we have the first 30 seconds or a minute without sound, which is just a light experience, and then we add the sound. We may continue with that kind of structuring in modes, so that not everything is happening at once. First the interviewer is controlling lights, then the interviewee also controls sound and we are building a path. Then comes the touch, but how to bring someone to touch? It is not so difficult as it seems, because we touch each other all the time, like when we shake hands, but as every human thing it goes step by step. This progression is guided by scenarios – series of scenes in the computer – so each situation is programmed but the time to change from one scene to the other, and in a way even the choice of the scenes to an extent is variable. From session to session the interviewer can guide the experience, sensing and choosing the pace of the interaction. 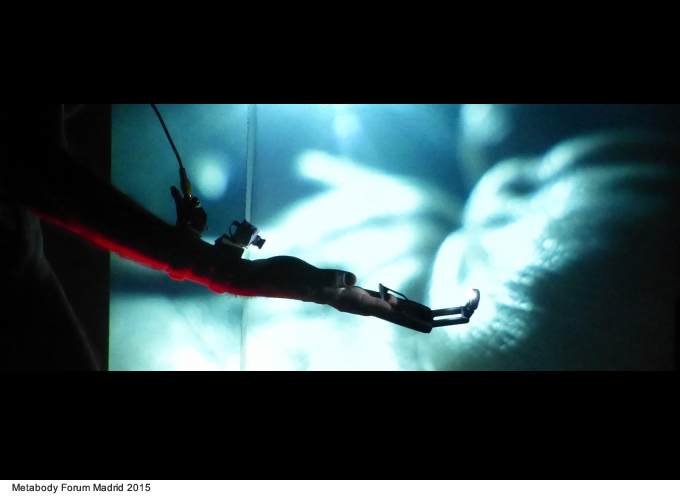 Vanessa Michielon: So, the interviewer is usually an instructed performer from your team…

Robert Wechsler: Yeah, I think it’s an interesting job that an artist can think of. It’s actually inspired to Marina Abramovic confronting someone sitting on a chair. In other words, my point is that the interviewer is an artist, so this is a special role for a special person that can create a very different kind of installation each time.

Vanessa Michielon: This work is very much focused on non verbal communication… How does this inscribes in the broader vision of Jaime’s Metatopia?

Robert Wechsler: I think one idea is that this Meta-Interview happens at the end of the pavilion, and instead of handing the audience a questionnaire asking what they think about the artworks, this is the interview where they can express their reaction towards what’s going on. It’s not exclusively non verbal by the way, I just wanted to feature non verbal communication but sometimes words can get in the way. I wanted this aspect to be emphasised but of course speaking is not forbidden.

Robert Wechsler: Interesting questions… that you are not asking the opposite, if there is anything that I believe in… Well, as artists we have our tastes, ways of doing things and particularly when we get older it’s always a bit exclusive, in a sense that we have learned what we like. So, of course I love watching dance when dancers move beautifully and sometimes things that are happening around are just distracting and that annoys me, but sometimes I can see the dance through the other media. Other things that I reject… 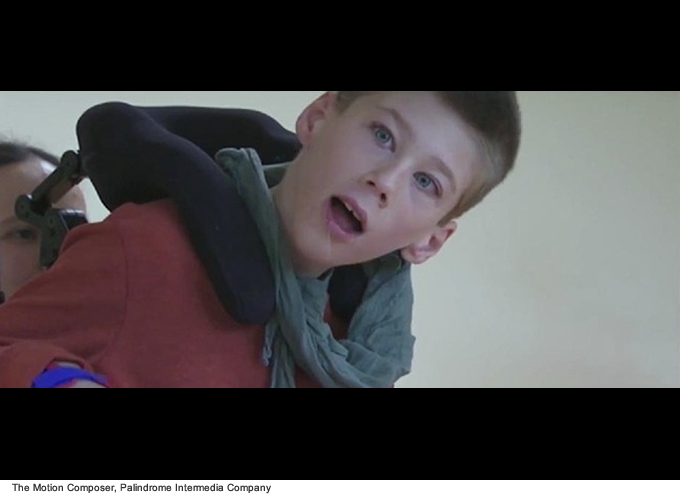 Vanessa Michielon: May be something that you have personally used in your past research…

Robert Wechsler: Yeah, it’s a bit like that, because I have used a lot of technology through the years. For instance, one of the persons in my team for my project, called Motion Composer, is meeting a researcher who wants to use EEGs attached to the music environment, so that one can control the music with the brainwaves. He also wants to employ EMGs, myograms, and electrical signals from the muscles, and also EKGs, so electrocardiograms. There is a fascination from artists and scientists with these signals coming from the body to change media and this idea might be catchy for the imagination, but I don’t think that it’s good tough, because these are signals that we actually don’t have that much control over.

People think they can calm their brains and bring up the beta waves and you can a little bit, just as you can control your heart a little bit, but it’s not a very direct. I’m interested in very direct connections, in that sensation that that’s really me who is making music, while with brainwaves it only works if someone explains you the interaction, it’s not so intelligible. I am a bit sceptical about this fascination and I don’t really think that it makes sense, at least in the kind of art I am trying to make. I mean, the brain is hugely complicated and you are not going to hear your emotions, for example, you can’t filter them out.

And actually part of this Metabody concept is that we don’t want to extract some truth out of our bodies. In his vision, Jaime celebrates what he calls the disalignement, the weirdness of the human beings, the individuality, as he claims that the new digital technologies have not been freeing people. What is happening is that they are conforming people; they are limiting us and confining our expressions. 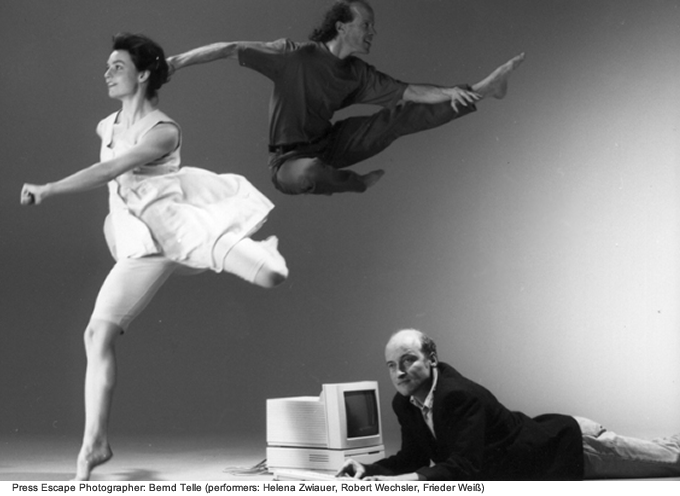 Therefore the world needs a second Digital Revolution where we throw away these ideas and rethink the Digital Age and not look for the signals, not try to quantify human experiences. So it sounds a bit contradictory, as we are doing this interactive thing where we are actually quantifying human experiences, but he wants to do it in a freer, more artistic and individual way, and I believe in that as well.