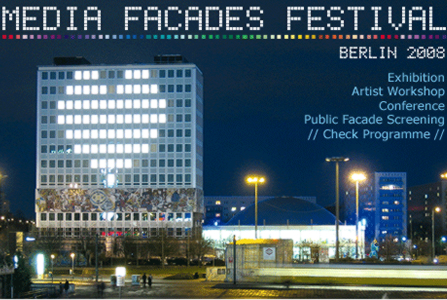 The Media Facades Festival reflects on a worldwide trend of large digital moving images integrated in facade structures and investigating their communicative function in the urban environment. It will take place in Berlin with an exhibition at DAZ from 16 October to 12 December, with an international conference on 17-18 October, with urban screenings from 18 October to 3 November and finally with a Round Table on 1 November 2008

For the first time, the public will witness the use of not only cultural but also commercial facades of SAP, O2 World, Gasometer Schöneberg, Collegium Hungaricum Berlin and the Wall-Terminal as cultural communication portals. Twenty-four original artist works specifically commissioned for the different façades will be screened from 17 October until 3 November 2008.

The artist works will focus on the exploration of site-specific content, space and dimension. The unique artistic productions and installations will also involve participation of the local inhabitants where the facades are situated in an attempt to generate a new sense of identity. The interaction amongst the commercial media facade operators, curators, artists and the general public facilitated through this festival will serve as testing ground for future creative and urban media developments. 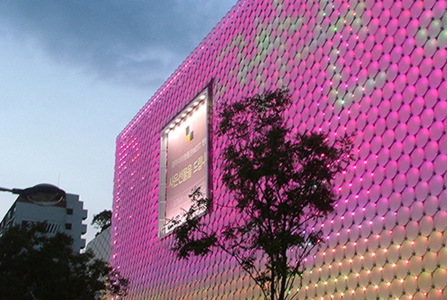 Alongside, we present an international conference with a diverse range of speakers and an architectural exhibition comparing and providing details about worldwide unique media Facades at the German Architecture Center.

The conference will focus on the relevance of media architecture and urban screens both for experts and the general public. It aims to promote architectural questions and visions within a wider context of related aspects considering danger of visual overload in urban space. Besides Project Presentations and an expert workshop organized by ARUP we will discuss the following topics: