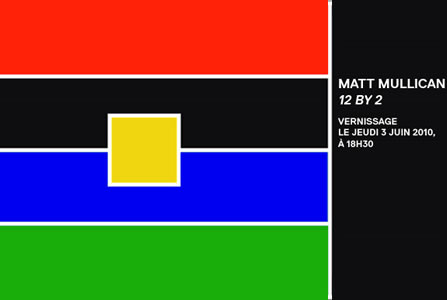 The IAC – Institut d’art contemporain is presenting the largest solo exhibition by Matt Mullican. For his exhibition, Matt Mullican has opted for putting his oeuvre into perspective in a mode combining the experimental and the archival.

The resultant abundance of documentary material, associated with the categorizing of objects according to their inner nature, gives rise to an exhibition deliberately more evocative of a workshop situation than of a classical presentation of works of art.

The focus here is on the recent cycle That Person’s Work, which will be illuminated by works from the 1970s and which, combined with his use of hypnosis, allows for exploration of different works by the artist in a host of different genres.

Working in the fields of performance, installation, digital technology and sculpture, Matt Mullican is seeking to develop a cosmological model based on a personal vocabulary combining the visual and the symbolic. Hypnosis and cartography are his principal modes of operation.

He explores functional sign systems of his own devising through actions undertaken under hypnosis, in a permanent back and forth movement between the real and its schematization, and between fiction and its physical reality.

His overall world system comprises five separate parts and their respectively colored referents: green corresponds to the elements, but also to death and hell; blue (“the world unframed” – by consciousness, that is) to the city and events that go unperceived; yellow (“the world framed”) to the world marked out by consciousness and art; black to language and signs; and red to absolute subjectivity and ideas – but also to paradise. Whether the system is used in terms of its separate elements or as a whole, its compartmentalization represents a vertiginous attempt to contain the totality of both the world and its representation. 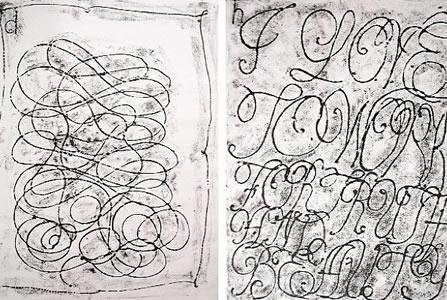 For some years now Matt Mullican has been emphasizing a more distinctive aspect of his oeuvre, which he calls That Person’s Work, “that person” designating the multiple subjective entity – male or female, young or old – utilized in his performances under hypnosis. Using the automatic writing mode, the experiments carried out during the performances are noted down in the form of texts and abstract calligraphies, the common factor being a world within our world in which Matt Mullican reconstructs elements of a “fictionalized” existence.

Born in California in 1951, Matt Mullican occupies a highly distinctive niche in the Contemporary Art field, in terms of both the nature and range of his artistic project. Continuing an international career that has included participation in Documenta in Kassel in 1982, 1993 and 1997, Matt Mullican presented the exhibition “DC: Matt Mullican – Learning from that Person’s Work” at the Ludwig Museum in Cologne in 2005, and in 2007 gave a performance under hypnosis at Tate Modern in London.