The material-ability praxis of Manuel Kretzer 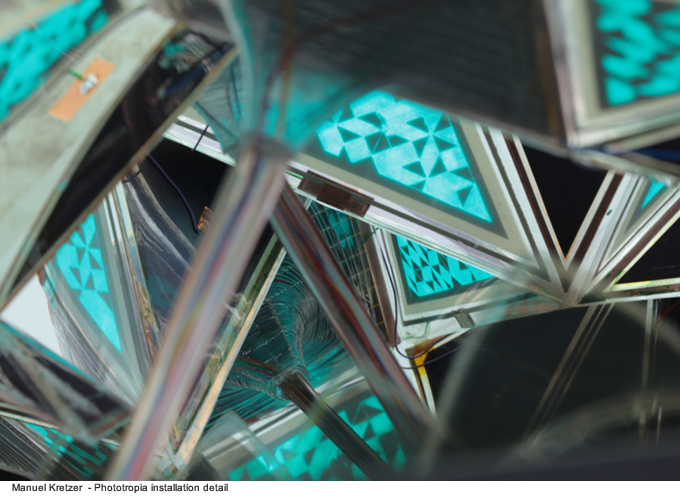 Architect and Designer Manuel Kretzer is research assistant at the Chair for Computer Aided Architectural Design (CAAD), ETH Zurich, Switzerland. He coordinates the Postgraduate Master of Advanced Studies’ digital design and production modules and also conveys a doctoral research on soft and dynamic architecture with a particular focus on smart material performance.

In 2012, Kretzer initiated the Materiability Research Network (www.materiability.com) a non-profit educational community platform that promotes novel material developments in the form of open information and do-it-yourself tutorials. Manuel Kretzer is also partner and co-founder of Responsive Design Studio (www.responsivedesign.de) with Hans Sachs, based in Cologne and Zurich. The studio practices with an array of interesting designs which explore responsive, adaptive and alternate solutions towards architecture and its interaction with its users.

In addition, Kretzer has published The Cone – Interactive architecture for Burning Man in 2008 and is currently working on a book entitled Alive – Advancements in Adaptive Architecture, which will be released in August 2014. He has written numerous book contributions and articles such as Shapeshift: Soft Dielectric Electroactive Polymers and Architectural Surfaces in Bracket 2 [goes soft] in 2013 or ShapeShift in Leonardo 45, Issue 5, just to mention a few.

As part of my research comprehends innovation in materials and technology, smart materials have been growing in a fast pace and many questions arise through these explorations I am willing to make more part on. Manuel Kretzer has become a person who’s in constant practice and interaction towards innovation in architecture and responsive materials, for a synergistic future design. For now, the moment has come to clear out a few questions, with answers provided by an expert on explorations. 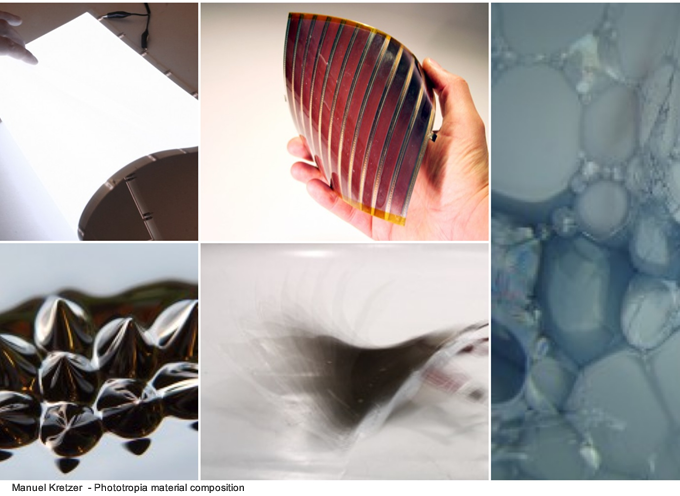 Mabel Plasencia: The field of Responsive Architecture has been defined as one that requires the extension and redefinition of traditional Architecture by upgrading its energy performance with the incorporation of computing power. Based on your experience, how can you explain this constantly evolving field of Architecture and the direction it might be leading us to or where should we be focusing on?

Manuel Kretzer: In my Materiability research at ETH I rather see myself as a scout for new potential materials than trying to predict future scenarios for Architecture. Therefore energy efficiency etc. doesn’t play any role. I think it’s easier to create something new when the limiting factors are as few as possible. My approach is therefore more of an educational value. I try to understand certain (smart) materials without having any idea of what they could be used for. Through this I can reach the performance limits of the particular material and understand how it works. By rebuilding the material in a DIY manner I can then manipulate and tune certain properties and speculate on how they could be of value for architectural requirements.

Yet the aim is not to improve a material’s performance or efficiency but more a demystification of technological advancements and the attempt to create a basic knowledge. This is achieved through tutorials and open information that architects and designers can understand, and use it to communicate with scientists, who then are able to design new materials specifically for architectural usage. The goal of my work is thus to reveal, educate and inspire. How the information is then applied is up to the person using it.

If you ask me about what I think of responsive architecture, I think energy efficiency shouldn’t be the main driver. It should be a necessity – of course future buildings need to perform better than old ones – but it shouldn’t be celebrated as much as it is now. It should just be natural, not even worth talking about. The main goal should be making it more responsive to people, since architecture in my opinion should firstly be about people. I think spaces should be more adaptable and flexible to the requirements of different people and usages, since we are all different, rather than designing for some kind of contemporary “Vitruvian man”.

Mabel Plasencia: How do you describe the job you develop at Responsive Design Studio?

Manuel Kretzer: Responsive design studio and materiability are two different things. Materiability is completely exploratory, not about particular applications but more about education. Basic research. In responsive design studio, which I founded together with Hans Sachs, who is also working at a University in Germany, we try to implement certain technologies or tools that we have used in our research in a more applied way. So far this focuses mostly on digital design and fabrication techniques and less on smart materials. But since we’re not dependent on our studio to create revenue everything is still very experimental and prototypical. The driving idea is however similar to my materiability research. It is about creating spaces or objects that respond or integrate or engage with their user, that give the user a feeling of participation and thus also ownership. All of our projects require the user to become active in some way, either as kinetic and transformable sculptures or furniture pieces that need to be put together by the client etc… 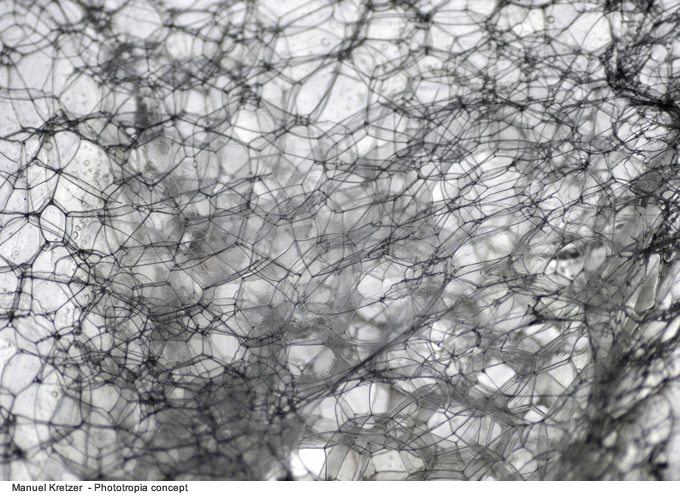 Mabel Plasencia: If you could describe your favorite project by far, which would it be and why?

Manuel Kretzer: For my research I think Phototropia would be my favorite, even though I enjoyed working and collaborating on all of them. During Phototropia the focus was to self-produce all materials that were used in the project to prove a certain independence from industry and the market. This included the making of electroactive polymers, electroluminescent displays, eco-friendly bioplastics and thin-film dye-sensitized solar cells. The elements were combined into an autonomous installation that generated all its required energy from sunlight and responded to user presence through moving and illuminating elements. The produced energy was stored in batteries below a base platform and distributed via microcontrollers to the respective elements. Obviously since all elements within this project were self-made their durability and performance did not reach their potential maximum. Consequently a number of industrially produced dye-solar cells had to be integrated in order to achieve the required Voltage.

From my projects as responsive design studio, the Cone is still my number one, since it was Hans’ and mine thesis project which we built at the Burning Man festival in the USA. The ‘Burning Man’ is a yearly happening art festival in the desert of Nevada, USA. For one week 50.000 people create their own short-term living space, called ‘Black Rock City’, which then disappears without leaving any trace. The 2007 theme, ‘The Green Man’, concerned humanity’s relationship towards nature. Referring to this topic ‘The Cone’ created an interactive piece that made the users think about electrical power and its responsible use.

The Cone was made of a two-layer structure according to the principals of Russian engineer Vladimir Shukhov. The inner cone was fixed to base platform, which also worked as an entrance from below, and the outer cone was twistable attached to the top and a bottom rail. Ensuring this flexible bearing the outer structure could be rotated by manpower around the inner one. Due to the filigree lattice construction method this overlap of layers created an atmospheric interference effect and especially inside ‘The Cone’ suggested the impression of being within a giant machine.

Mabel Plasencia: In the matter of Actuated Tensegrity Structures, does it relate directly or indirectly with Responsive Architectures? How do you understand this relationship?

Manuel Kretzer: I think actuated tensegrities are just one possibility to create adaptive structures. It’s a kinetic principle that can be created through various actuators, e.g. motors or hydraulics. It’s interesting structurally and aesthetically but it’s only one particular method.

Mabel Plasencia: As part of my research, I have found that smart materials have been in constant exploration and somehow related to biomimicry. What are your thoughts on this?

Manuel Kretzer: Same as above. Biomimicry is interesting in some aspects, to get inspired for example or explore certain mechanical principles, but I don’t think it’s a generalized solution. I don’t believe that nature has already solved all problems and that we only have to search long or deep enough. It always depends on the particular situation and requirement, so in my opinion it should be a tool and nothing else.

But I also think that similar to the hype around energy-efficiency, biomimicry is another keyword that we currently hear a lot because it makes it easier to sell stuff and because it makes for nice images. And of course people can relate to it, because they see something in a design, which they connect to something that they know from nature. And since it’s from nature it must be good and it will help us to overcome the guilt we feel because we are treating our planet so bad. 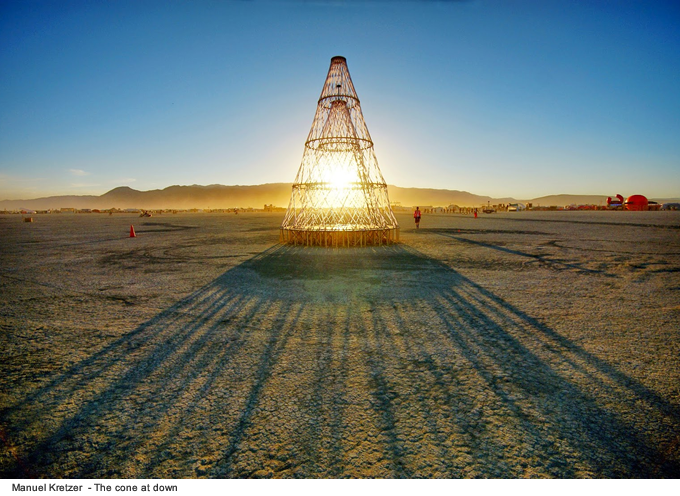 Mabel Plasencia: On the same topic of materials, your Materiability Research Network provides a database for materials, tutorials and forums on which researchers can expand knowledge. What was your source of motivation for the creation of this network?

Manuel Kretzer: I began looking into these materials driven by a naïve curiosity and figured that the results were quite interesting, also for fellow architects and designers. I also noticed however that the main difficulty in exchanging with scientists and engineers, who really develop these materials, was a communication problem. Since either I didn’t understand what they were saying or they didn’t understand what I was trying to achieve, also because I didn’t mean to achieve anything particular in the first place.

I thus decided to acquire a general knowledge of what they are doing before approaching them and asking them to collaborate, and it is important to emphasize that collaboration, cross-disciplinary collaboration is key in that context and in my opinion for the whole field of architecture. We have to urgently depart from the notion of the architect being the master builder with universal knowledge. So the idea was then to collect my experience and present it in an easily understandable way to fellow designers so they can use this knowledge to communicate and collaborate with other disciplines. 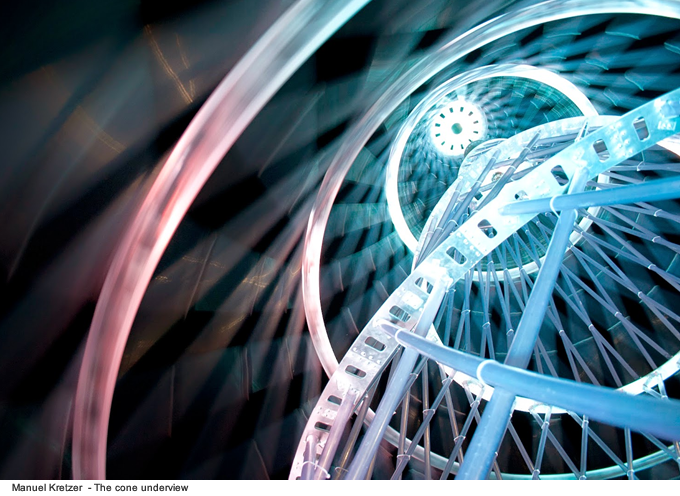 Mabel Plasencia: Learning that you are the coordinator for the modules on digital design, fabrication and materials at the Postgraduate Master of Advanced Studies of Chair for Computer Aided Architectural Design (CAAD), what suggestions do you have for people interested on specializing in materials and technologies?

Manuel Kretzer: My suggestion for people being interested in new materials would be to keep their ears and eyes open about new developments and try to get their hands on samples and then physically play with the stuff or to put it in the words of Walt Disney “the way to get started is to stop talking and begin doing!” In that sense the Internet is an amazing resource. (Almost) everything has been done already and can be found there. So if I find a new, interesting material, I always see if there’s anyone out there who has already worked with it and has experience, and then after having a basic knowledge of the material I approach these people and ask them for more information. Then I source the components and ingredients and try to rebuild the material. And then I share that knowledge so others can benefit from it on the www.materiability.com website. So all you makers and tinkerers and hackers and everybody else, join the network and share your passion with the rest of us!