MatchPoint: the artistic research as a collaborative practice in the contemporary city

As Richard Sennett writes, “doing a good job means having curiosity about what is ambiguous, going to the bottom and learn from the ambiguity”, exploring a “border area between resolution and identification of problems.” Curiosity and interest in what is not known – even when, as in this case, we talk about social processes which are evident but still poorly understood – are the quintessential elements of Tre Tigri-Taprobane, the project winning the 2016 call of Art, Heritage and Human rights, organized by Connecting Cultures.

The object of investigation consists of a social organism which, through its presence in the working-class districts of the city of Naples, acts as an active protection of its tangible and intangible cultural heritage, revitalizing the pre-modern shape of the inner cities and participating in the definition of city effect (comparison, exchange, contamination). In fact, with more than ten thousand presences, Naples, after Milan, is the second province of destination for individuals from Sri Lankan origin, in Italy (cfr. Report on the labor market of Immigrants of the Ministry of Labour and Social Policy, 2012).

The Sri Lankan community is rooted in the areas of the historic center of Naples, activating exchanges with the resilient population but maintaining a strongly identified cultural structure. In particular, in the Rione Sanità and in Montesanto – amongst the most dense and multi-ethnic neighborhoods – it is possible to detect a substantial presence, which can be noticed even in small business activities that have a positive impact on the territory. 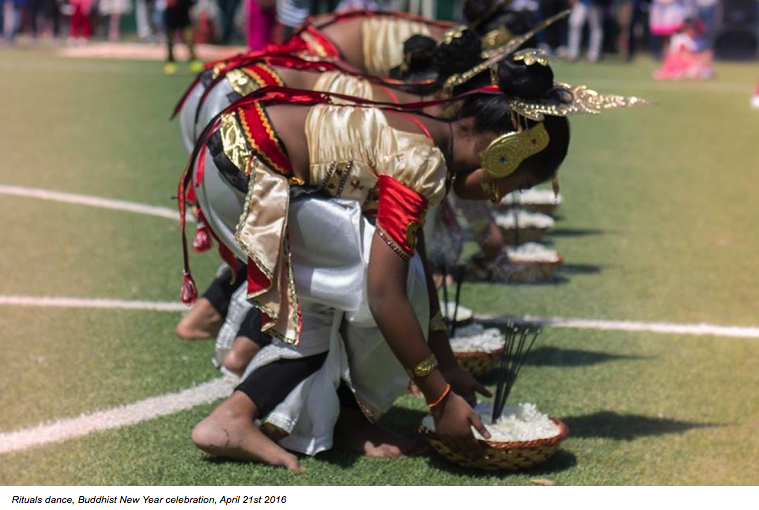 The characteristic of this part of the city is a distinctive form of dynamic co-existence, non-stereotyped in the acceptance of a preordained model of coexistence. Here, the sense of territorial identity, deeply rooted, opens to critical comparison with others. The interaction between social and ethnic groups has grown following the organic rhythms of a dialectical process, expression of a contiguity, which is possible also because of the great devotion shown by the community since the beginning of the 90s, representing in many cases the new business segment of the neighborhoods in which they have settled.

By intervening in this scenario, the project Tre Tigri-Taprobane proposed territorial laboratories of relationship between the Sri Lankan community, the population, the associations active in the territory, and the institutions operating in the field of contemporary art, stimulating a peculiar hybridization between the aesthetic, the social, and the performative languages, notably through cricket, Sri Lanka’s national sport and, therefore, aggregative practice widespread among the streets of the city.

For this purpose, Sri Lankan associations have been involved in the project, such as Kent Cricket Team, the dance school Dance Academy Nipuna and webtv GeeTv, landmark of the Sri Lankan community (geetvlive.blogspot.it). In addition to this, they have been an active part of the various associations operating in the area, such as the Sociocultural Laboratory “Le Scalze”, the Architettura Nomade Lab, The Asilo Filangieri, Less Impresa Sociale, and several Foundations active in arts and culture, such as the Morra Foundation for Contemporary Arts and Donnaregina Foundation for Contemporary Arts. 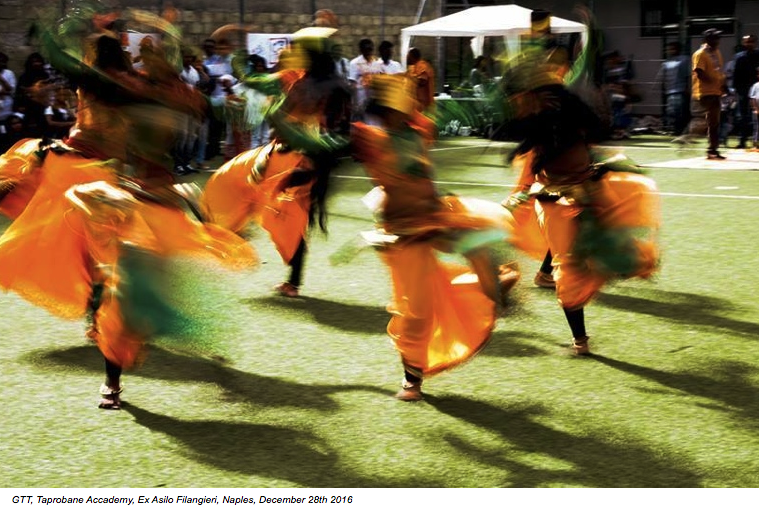 During this process, the definition of the space turned out to be the central element. Cricket is a sport that intrinsically aims at building temporary relationships because, by rule, the measures of the playgrounds are not fixed, prescribing only a formal aspect to be respected. What’s more: as a result of these inputs, the mutual knowledge processes were activated from the practice of hybridization between mutual geographies, crossing the paths through which communities themselves are developed, in a dialogical process, as of April of 2016 until now. Ultimately, it is an option other than the articulation of the neo-liberal “creative city” based on consumption paradigms and formalized creative sectors (on this topic, we signal the  studies by d’Ovidio and Cossu about the case of Macao in Milan).

Getting in touch with the various areas affected by the project, it was determined that most suitable places to become meeting points are those in which policy-makers have given less defined functions: squares that become cricket fields, parks, areas of “terrain vague” , such as the large space between the Poggioreale district and the Asse Mediano, which became immense fields for Sunday cricket. As Franco  La Cela says: “social life is precisely where the creativity of the inhabitants is not too bound either by architecture or by the rules.”

Gaining new concrete interaction spaces, expanding from the bottom-up relational possibilities, facilitating the permeability between artistic vocation in places and spaces of social inclusion, Tre Tigri-Taprobane has generated long-term operational opportunities, for an urban mapping outlined by the overlap among topographical areas, individuals, and functions that cross them. This complex stratigraphy has emerged, visually and narratively, in MatchPoint, the meeting in Castel Sant’Elmo also part of the XII AMACI-Day of Contemporary Art’s program. 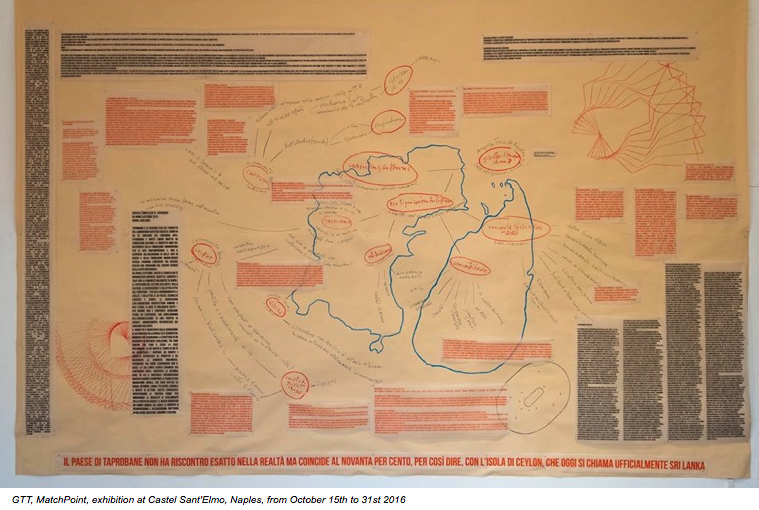 In this knowledge-building process, participants have also actively taken part into the identification of the places that would host the workshops, chosen according to the intersections of urban geographies: from the spaces of the community – such as the Buddhist Temple – to those of the vibrant independent spaces of Naples – like the Ex Asilo Filangieri – up to the historical and institutional sites such as the Convento di San Nicola da Tolentino and Castel Sant ‘Elmo, whose square, Piazza d’Armi, became a cricket field for one day, creating an ideal symbolic gap and using the performance as a tool for recognizing common territories and social innovation.

MatchPoint represented the common ground on which identities have got to meet and integrate, linking players, teams, and cultures. The sport has constituted a shared framework for representation, interpreted by the languages of art, within which moments of cooperation and collaboration among institutions, associations, individuals and communities occur, linking individuals to environments they rarely connect with. The whole process was intended as a relational laboratory, capable of tending towards convergence between the various components of the urban fabric.

The MatchPoint phases were documented and processed in a short film, broadcast exclusively by Exibart.tv (here and here Vimeo link of the trailer and the film) and intended as a tale of bodily expressions, as coordinated movement, the choreography of a collective ritual. 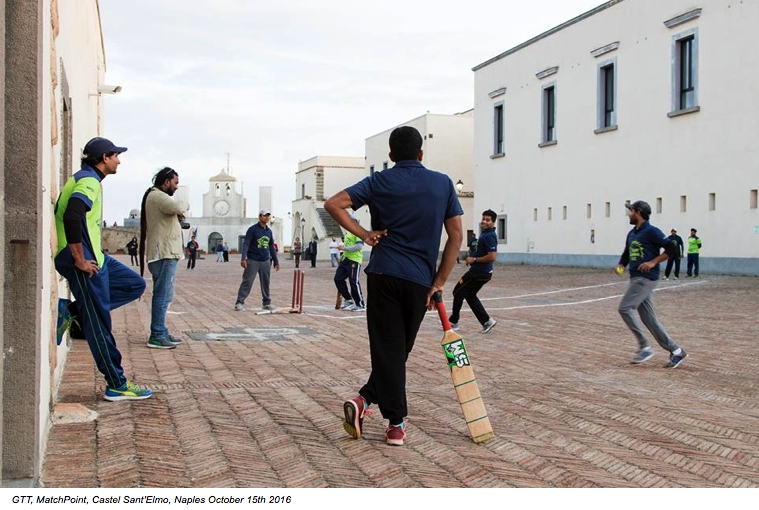 Currently the project is continuing to further deepen the dynamics of interaction present in Sri Lankan communities, addressing the carrom, another totem of game culture of the subcontinent and also disseminated in Naples. Similar to cricket for the unpredictability of trajectories, it is also focused on very similar rhythms and on the tension created by the space sharing, even if miniaturized on a domestic scale. Based on this suggestion, “Carrom House” is being developed, a meeting dedicated to the reinterpretation of carrom through the proposal of a tournament to be played between the various parties involved, which will help to draw up a specific regulation. Here one of the format approaching stages, a meeting with Saman, the beholder of the rules of the game, acknowledged by the community.