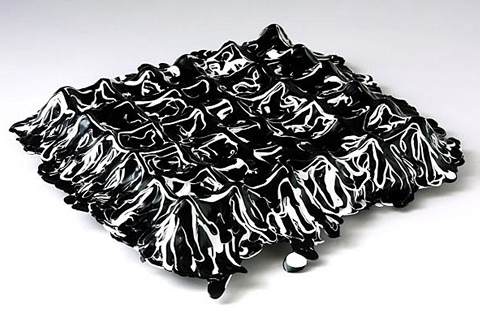 Luis De Jesus is very pleased to announce a solo exhibition of new work by Margie Livingston, titled Paint Objects, opening January 22 through February 26, 2011. An artist’s reception will be held on Saturday, January 22nd, from 6:00 to 9:00 p.m. This will be the artist’s first solo presentation in Los Angeles.

Margie Livingston has long been admired for her abstract paintings that articulate the interaction between the architectural grid and the natural, organic world. Based on three-dimensional models that she builds in the studio, her paintings directly translate the phenomena of space, light, color and gravity upon these hybrid structures into lines and bands of color that hang seemingly suspended in space. Now, letting accident and discovery meet invention and experimentation, Livingston reverses her usual process, using paint to construct objects. Her new paint objects-built entirely from dots, strips, and skins of dried acrylic pigment-investigate the properties of paint pushed into three dimensions and offer a compelling view into how the medium of paint can be used sculpturally. With this major transformation of her practice Livingston has moved away from working with the illusion of space and toward working with literal space, constructing objects that straddle two media-painting and sculpture.

Experimentation drives Margie Livingston’s work, sometimes by accident or serendipity. For example, when a paint skin detached itself from the wall where it was being used to test an adhesive, she picked it up and folded it like a piece of laundry. That mishap became ‘Folded Painting, Small’ (2009)-the first in a series. The simple domestic act of folding these swaths of marbled color allows the object to flux between finished product and waiting-to-be-used resource. And when another work in progress turned out to have too many cracks, she set it aside until it occurred to her that she could approach it as if it were a piece of wood and shape it into a cube. The result was the first work in her ‘paintblock’ series. Livingston literally pours gallons of paint out in sheets and lets them dry for days, like so much acrylic fruit leather.

Each layer is made of several gallons of acrylic paint, poured, splashed, dripped, and formed in an expressionistic manner. Attention to fleeting impressions and associations also has its place, as when Livingston noticed her eye being drawn more to the drops of paint on her studio floor than to the canvas she was painting. This observation eventually led to ‘Room’ (2008), a single continuous row of more than 3,000 paint drops lined up and glued at eye level all around the walls of the gallery. Although ‘Room’ is a two-dimensional painting, it had the effect of turning the gallery itself into a painting that the viewer could enter and walk through. Livingston will present the second iteration of ‘Room’ is this exhibition. 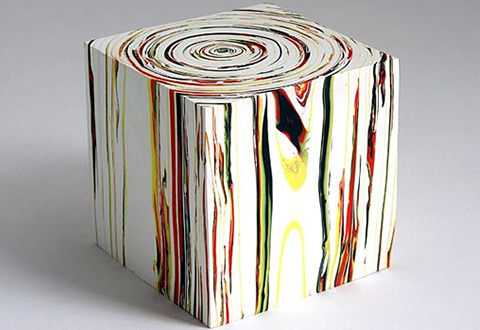 As Livingston makes new work and incubates new ideas about painting and sculpture, she often does so in dialog with other artists. Her paintblocks are a riff on the minimalist sculptures of Donald Judd, Carl Andre, and Charles Ray, and her folded and coiled paintings offer a nod to the sculpture and studioworks of Linda Benglis and Eva Hesse, and even Barnett Newman’s zip. But these new pieces also subvert, challenge, and recontextualize the works of those artists. Although the paintblocks may look like wooden sculptures, they are actually objects made from acrylic. And even the scraps left over from cutting the paintblocks have their uses-Livingston reconstitutes them as flat shapes reminiscent of waferboard. Thus, her images, rooted in process and conceptual reference, are depictions of raw materials that hold the potential for becoming still other artworks.

Equally fascinating is how Livingston subsumes and feminizes traditionally macho art traditions, particularly those of abstract expressionism and minimalism. The image of Livingston heaving paint onto the floor inevitably brings to mind Jackson Pollock. A difference here is that after producing nearly a dozen of these canvas-free paintings, Livingston literally obliterates each one by rolling it up and then slicing the log into lengths. The gesture of individual expression is sliced by machinery; layers of accident, collaboration, and culinary skills draw attention away from the hand of the artist and towards the process itself while, at the same time, the object is clearly a finished product with presence.

Margie Livingston received her M.F.A. in painting from the University of Washington in 1999 and was awarded a Fulbright Scholarship in 2001, during which time she spent a year living and working in Berlin. Other awards include the 2010 Neddy Fellowship from the Benkhe Foundation and the 2010 Arts Innovator Award from Artist Trust (funded by the Chihuly Foundation), a 2008 Artist-in-Residence at the Shenzhen Fine Art Institute, and the 2006 Betty Bowen Memorial Award. She has been featured in solo and group exhibitions at the Greg Kucera Gallery, Henry Art Gallery, Seattle Art Museum, Tacoma Art Museum, SOIL Gallery, Shenzhen Fine Art Institute, and Amerika Haus-Berlin, among others. Margie Livingston’s work is included in the permanent collections of the Shenzhen Fine Art Institute, Seattle Art Museum, Tacoma Art Museum, and numerous prominent public and private collections.