Marco Barotti: listening to the different expression of sound

Marco Barotti is a contemporary artist and performer. He studied music, and specifically percussions, at the Siena Jazz Academy in Italy. He moved to Berlin in 2007, entering a new sonic dimension amongst the myriad of musical genres cross-pollinating the city.

After moving, he encountered Plastique Fantastique, a group of creative artists based in Berlin that play with the potentiality of the urban context, creating temporary installations matching sound and architecture. Together with Plastique Fantastique, Marco Barotti created installations like The pulse of London, a machine that mixes the human body with sound and architecture: it receives the pulse of each visitor’s organism and translates it in order to generate its own beat. The Pulse of London is a sound sculpture made for Saatchi Gallery in London.

With Plastique Fantastique also created Sound Of Light, a synesthetic sculpture which interprets and dynamically transforms sunlight into audio frequencies. It is a site specific installation designed for the former music pavilion in Hamm, Germany and won the Let’s Colour Award for the best use of color in technology and design. 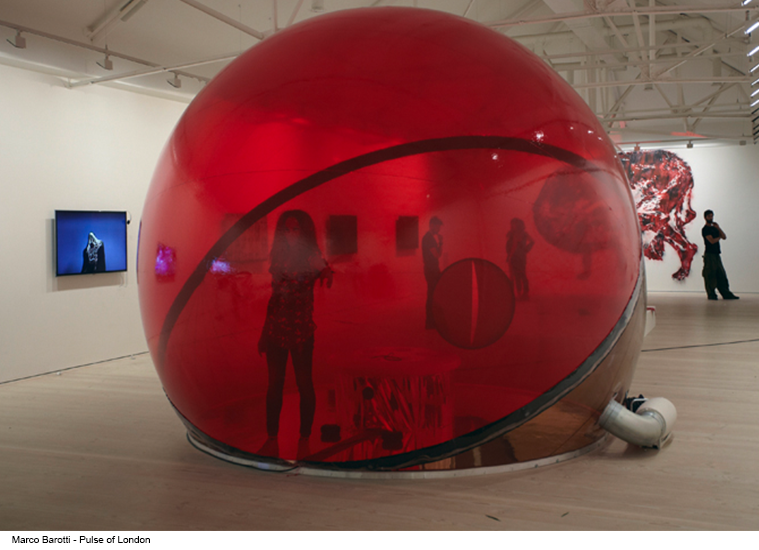 In 2011, Marco started his collaboration with Asphalt Piloten, a company of artists from different artistic and geographic backgrounds. They transform public spaces as if they were playgrounds for their performances and happenings, using the language of the body, matched with music and visual art, aiming universalizing their mode of communication. Barotti and Asphalt Piloten have traveled all over Europe with various projects winning both the Swiss dance award June Johnson and the Kultur-&-Kreativpiloten Deutschland awards.

In 2015 Marco created Swans, a “solo” installation. Swans are hybrid and technological animals that float on the water and sing with their own voice. From the installation concept: “Eight individual audio channels are used to transport the sound through the swans, bringing them into life and remodeling the landscape. This image provokes both a sense of revulsion and an intimate feeling of familiarity, serving as a hack of the natural environment while challenging the audience with its amalgamation of tech waste and wildlife”.

Swans was presented for the first time in Germany, on the occasion of Art Now and then moved to Iceland (Seydisfjordur) for List j Ljosi Light Festival.  From music to art and design and from art to music: Marco expresses his creativity also as a musician and composer. In 2015 Gomma Record released Rising, his solo album. 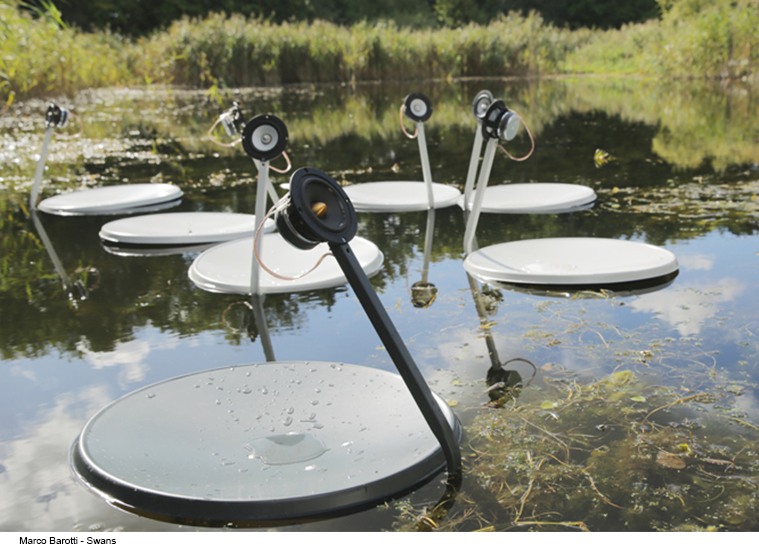 Simone Broglia: Hello Marco, finally we met! Great. How are you? How is it going in Berlin?

Simone Broglia: I’ve never heard about this, interesting! I see that you travel a lot… I thought you were in Mexico…

Marco Barotti: Yeah, I travel a lot, specially during the summer. In winter I produce… In Berlin it’s so cold! So I spend my time in my atelier. This year I actually took a winter break, and after the release of the album I traveled throughout India. I would have had the chance and the budget to work on an new album but from September 2016 until February 2017 I will be in New York, and I didn’t want to leave without finishing the work.

Marco Barotti: We won a grant with Asphalt Piloten, and we will be in residence for six months. It goes without saying that I would like to spend that time in a productive way. I want to go there without any unfinished project pending.

Simone Broglia: We mentioned Mexico, why were you there?

Marco Barotti: I was presenting my album Rising with a performance during the opening of the exhibition Reality is Boring produced by Platoon Kunsthalle & the Global Creative Alliance. I also made an installation for the exhibition, called Monotonal Cylinder, which is the result of a new partnership with Plastique Fantastique. 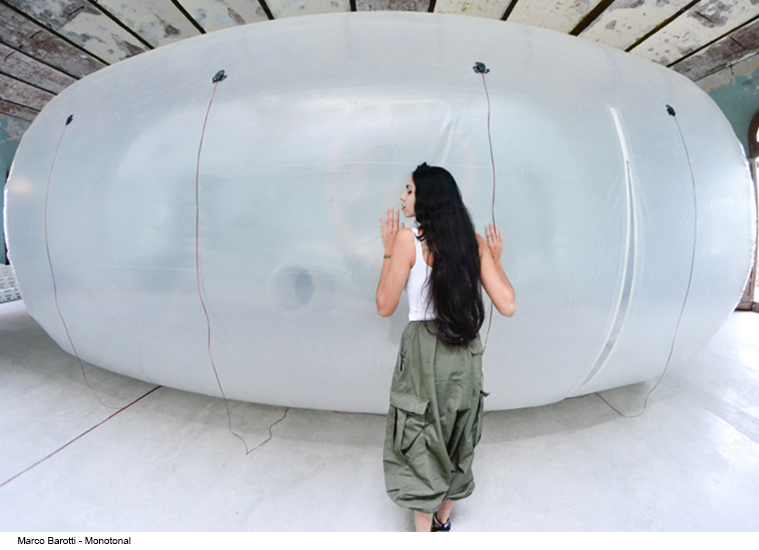 Marco Barotti: It works with contact speakers that make the material of the structure vibrate, transforming the installation into a sound membrane. It’s like being inside an instrument … It is my first installation in mono. Until now, I have always worked with 4, 6, 8 channels, but this time I wanted to work with only one channel. Back to Basic.

Simone Broglia: We have mentioned many things so far, so let’s recap… You work on different sides: in partnership with Plastique Fantastique, with Asphalt Piloten, and by yourself. How were these different partnerships born?

Marco Barotti: Everything I do starts from sound, and it develops in and through various forms. As it happens in music: musicians that arrive from the same scene, or even from different ones, combine their experiences to create something new. My collaborations are conceptually the same, but they are developed in a multidisciplinary way, with the idea to combine music, architecture, dance, and performance.

Simone Broglia: I saw Swans, one of your latest works and I’m very curious to ask you about it. Did you do everything by yourself? From concept to installation?

Marco Barotti: Yes, concept and realization, from zero to hero.

Simone Broglia: How did you work for Swans? How did you get the materials? Tell us something about it.

Marco Barotti: It’s been a fairly long process. The idea came to me in Russia in 2014, then it was developed and produced in Berlin, to be presented at Art Now last September. For what concerns the the materials: I had the help of Asphalt Piloted in recovering old speakers, horns, to then turn them into new sound devices, and finally I found the satellite dishes. 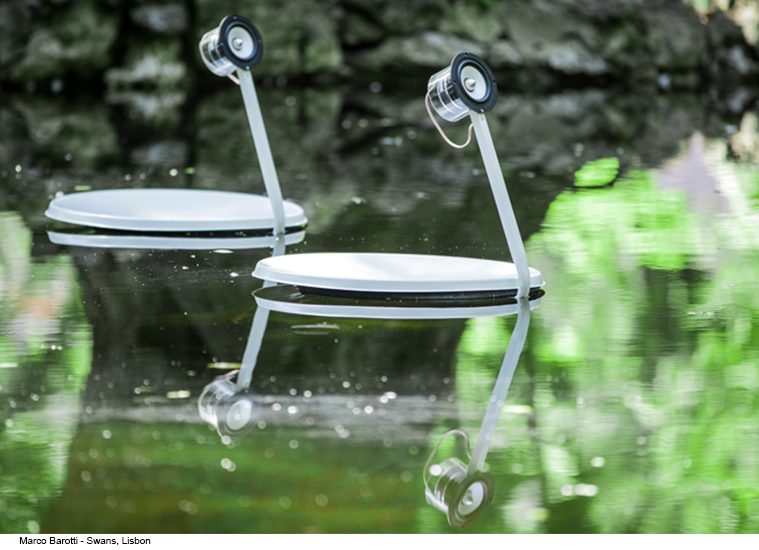 Simone Broglia: How do they float?

Marco Barotti: They can float thanks to air pressure rings hooked under the Satellites; a load in the back of the devices balances the weight of the Speakers and keeps the swans in equilibrium. There are also anchors underwater that hold the swans, preventing them from floating away!

Simone Broglia: And tell me something about sound and sonorization…

Marco Barotti: After a period spent observing and listening to the swans that live in the Xberg canal, I connected the sounds produced by animals to the sound of brass instruments. Then I asked to a number of musicians, especially from the Free Jazz scene, to play their instrument in an unconventional way, like noise machines. I used some parts of these recordings as sound metaphors for the swans, I then added a bass synth that follows the movement of the brass instruments producing exclusively frequencies below 50 Hz. The frequencies create a visible movement of the speaker membrane giving life to the metal animals.

Simone Broglia: I think this installation differs from what you usually do with Plastique Fantastique. Swans don’t seem to be site specific, nor seem to necessitate a specifically built environment for them, they are just set in a common landscape. By the way, what about Plastique Fantastique. Are you still working with them?

Marco Barotti: Yes, and it’s becoming more and more interesting. Research, projects development, new ideas and new approaches that we are discovering after changing the line of work. In 2015 we temporarily put aside the interactive elements that you could see in Sound of Light and Pulse Of London, investing much more energies on the relationship between Sound Design, Composition, and Temporary Architecture, creating organic hybrids like Breathing Volume and Monotonal Cylinder. 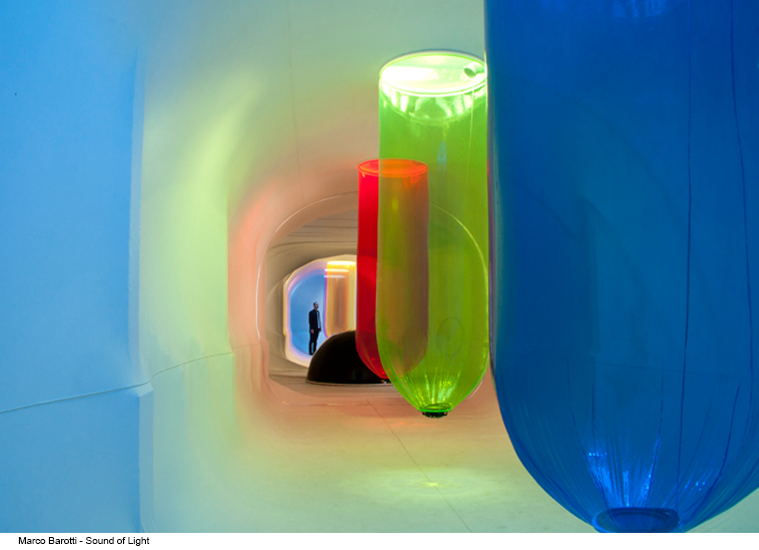 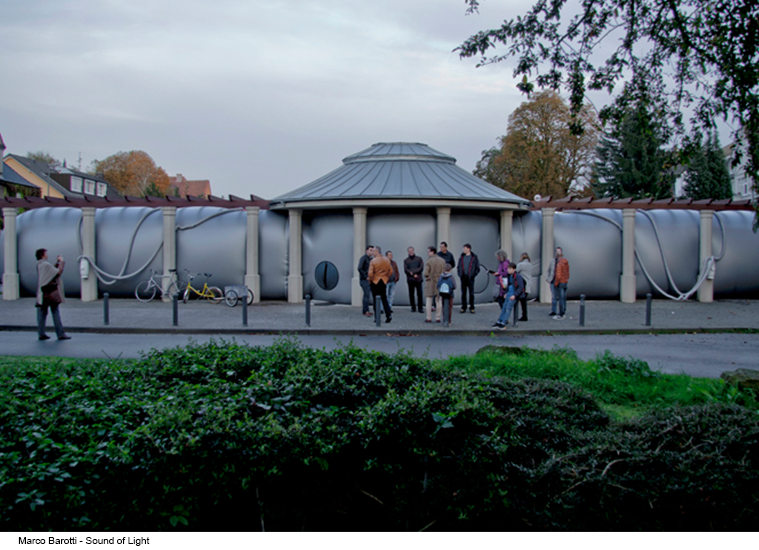 Simone Broglia: Tell me about Breathing Volume. How does it work?

Marco Barotti: This installation was created for an art festival in Prague. Breathing Volume is part of the new generation of installations with PF. In 2015 we had the idea of ​​combining Dynamic Architecture & sound design playing with the notion of space in an Audio Visual context. People were surrounded by breathing walls that manage to alterate the physical volume of the space every five minutes, creating the perception of being inside a living organism. The soundscape was composed inside the installation, mixing the frequency of the four fans and following the movement of the inflatable walls. As it happened also for Swans, I used frequencies below 50 Hz to make the 40 speakers’ membrane movement vicible; furthermore: here I integrated two subwoofers to ensure that the low frequencies could be also felt, not only seen.

Simone Broglia: I see you travel a lot in Europe, and your works too. I saw Swans was in Seydisfiordur this summer…

Marco Barotti: It’s came back from Iceland in June, in September was in Portugal, and now is in Brussels and I hope to bring it to Brazil next year.

Simone Broglia: I have to admit that I’ve followed your installation and performative works more than your album Rising. Does it have a good feedback?

Marco Barotti: It came out with a major label, Gomma Records, and won one Stipendium by Music Board Berlin. I’m proud of it, a great satisfaction finally realized. 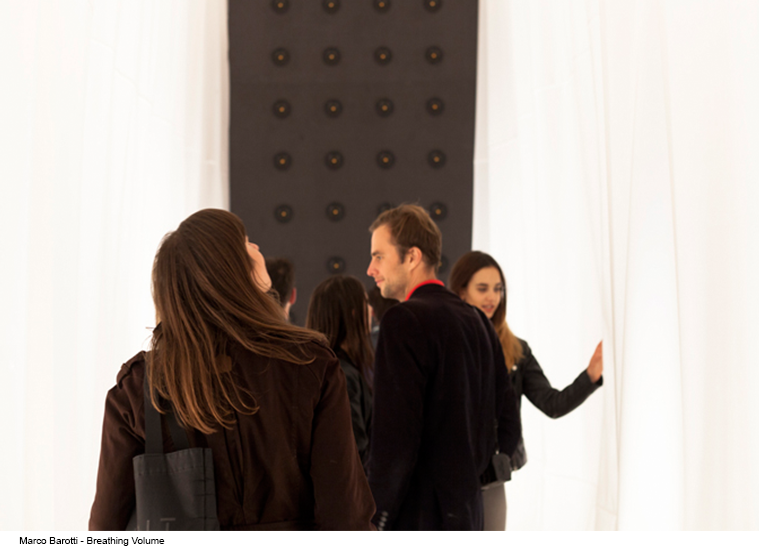 Simone Broglia: Are you busy with live shows?

Marco Barotti: I have made so many, so far! And I will continue to play until my departure for New York. On July 27, I have performed in Italy, at the Evo Festival then again in Germany and Korea. In October I returned to Mexico for Mutek MX.

Simone Broglia: And for 2017, what are your plans? You told me about New York…

Marco Barotti: Yes, I will stay in NY until February, then I’ll go to Marseille.

Simone Broglia: What are you going to do there?

Marco Barotti: A work on the sirens of Marseille, the project is called SIRÈNES ET MIDI NET.  Every month the Operà square of Marseille gives to an artist the task to create a work interacting with the sound of the sirens, which can be heard only once a month for 12 minutes. On March 1 2017 it will be my turn. The idea is to interview 120 inhabitants of Marseille, asking them what are their emotions and memories in relation to the sirens. At the end of the interview I will ask them six words that sum up the feelings associated with that sound. The composition of 720 words in 6/4 to 60 bpm, for a duration of 12 minutes (720   seconds) will be performed live in the square in front of the Opéra where 120 people recite their six words… becoming a sort of human loop machine.

Simone Broglia: It will have a very strong impact for sure! So people will recite something like a mantra… Right?

Marco Barotti: Yes, right. I hope to create strong moment of sharing between performers and audience, where different generations and cultures may be found, to give tribute to a sound that had had to do with their lives for more than half a century now. 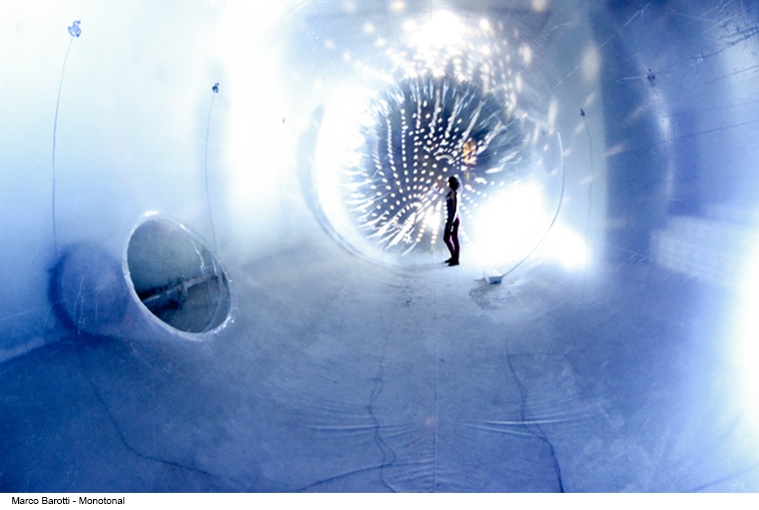 Simone Broglia: Few years after your departure from Italy I think your Berliner evaluation is positive. Right?

Marco Barotti: Berlin has given me so much both on a musical and a personal level. Love and hate! I love the city, but I love that my work develops mostly outside of it too. I travel so much, so I am always happy to return (except in February).

Marco Barotti: Thanks to you and Digicult.