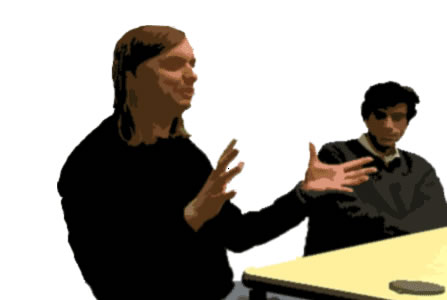 Filmed on location on the Isle of Lewis in North West Scotland, the film presents a powerful critique of UK-US bio-weapons research and addresses the paranoia surrounding bio-terrorism.  It centres on Critical Art Ensemble’s recreation of some of the secret sea trials conducted by the UK government in the 1950s off the coast of Scotland, which investigated the airborne distribution of bacterial agents including plague.

Commissioned by The Arts Catalyst, Marching Plague will be screened at Tyneside Cinema, and is followed by a panel discussion with Steve Kurtz and Steve Barnes of US art collective, Critical Art Ensemble.  The film seeks to expose the relative ineffectiveness of germ warfare compared with more conventional terrorist weapons, and to highlight the diversion of resources from pressing medical research to high-cost bioweapons research programmes in the current climate of fear of terrorist attacks.

Steve Kurtz, a founding member of Critical Art Ensemble, is currently at the centre of one of the most controversial court cases thrown up by George Bush¹s Patriot Act.  In 2004 when his wife Hope died naturally of heart failure at their home, Kurtz called the authorities.  The police, finding science equipment and art materials used by Critical Art Ensemble¹s in their ongoing work, called in the FBI.  Kurtz was detained and investigated for bio-terrorism.  He was later charged with mail fraud and wire fraud.  He faces up to 20 years in prison and the US Justice Department is still seeking charges relating to biological weapons.

Marching Plague will also be screened at the ICA, London, in May, and is part of the Whitney Biennial, New York, March – May 2006.