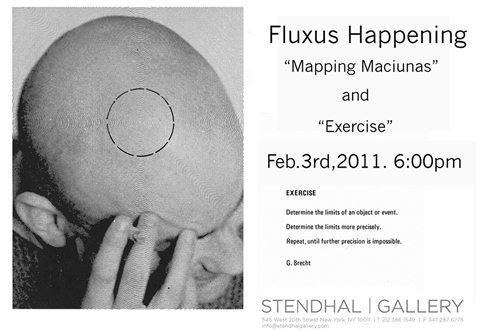 Stendhal Gallery is pleased to announce the opening of two exhibitions, Mapping Maciunas and Exercise on February 3, 2011. Both exhibitions examine the work of Fluxus artist, George Maciunas, who blended his education in architecture, graphic design and musicology to produce new ways of thinking about the state of contemporary society.

Throughout his life, Maciunas prided himself in the creation of learning machines, charts and diagrams to find precedents, clarify and advance the experimental art of his time. ‘Mapping Maciunas,’ exhibits various charts and diagrams relating not only to Fluxus and the avant-garde but to history and arts education.

The documentation of Fluxus personalities and events lead to the creation of Maciunas’ Diagram of Historical Development of FluxusŠ (1973), arguably a masterwork, which posits Fluxus in a continuum of radical art history brought center stage by Dada, Marcel Duchamp and John Cage.

Setting his sights on more practical matters, Maciunas undertook a 1968-1969 grant supported by the Carnegie Corporation of New York to improve arts education in the United States. His research for Proposals for Art Education, resulted in a series of charts and diagrams including Contemporary Man and a Curriculum Plan for both art majors and non-major programs. 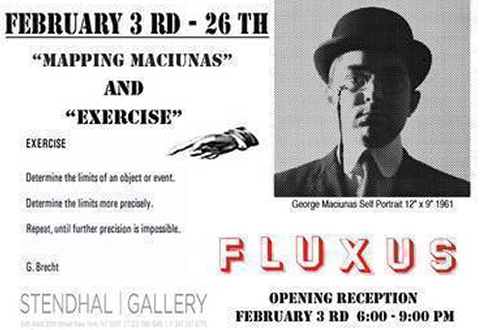 Just as Maciunas’s charts connect strains in historical movements rather then simply depicting history as a precession of events, Exercise takes an approach to understanding Fluxus, finding the forebears of Fluxus attitude not simply in Dada or other avant-garde movements in relation to which Fluxus is often contextualized, whether it be pre-Socratic philosopher and believer in universal flux Heraclitus, or fourteenth century philosopher and originator of the Ockham’s Razor principle William of Ockham, Exercise alleges that the Fluxus attitude long predates Fluxus, George Maciunas, or Duchamp.

On display in Exercise, is an installation inspired by Maciunas’s charts tracing the Fluxus attitude. Alongside this installation are Fluxus artworks by George Brecht, La Monte Young, Chieko Shiomi, Yoko Ono, Ken Friedman, Hans Richter, Giussepe Chiari, Nam Jun Paik, Robert Filliou and other artists who embody this attitude by using the concision of a haiku or a punch line to rupture our epistemological categories and encourage us to create our own. Juxtaposed with these works are artworks by David Bernstein, John Robert Moore, Nicole Demby, Narumi Iyama and Harry Stendhal, conceptual exercises that use Fluxus an a template for making one’s own templates.

The opening of the exhibitions will feature a performance by David Bernstein. This exhibition has been produced and organized by Harry Stendhal and sponsored by George Maciunas Foundation Inc. a 501 (c)(3) tax exempt non-for-profit arts organization.