Mapping Festival. A little treasure between the Swiss Alps 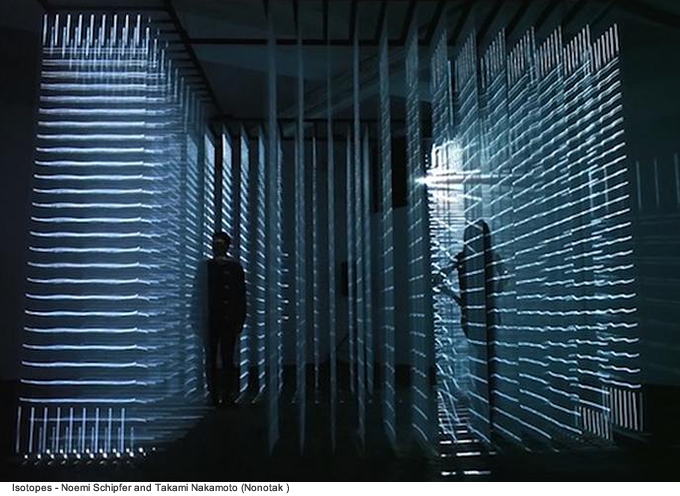 The 9th edition of Mapping Festival http://www.mappingfestival.com/2013/ took place from 2nd to 12th May in different venues around the city of Geneva (CH). I was invited by Ana Ascencio, co-curator of the festival to attend the concluding weekend of Mapping that this year presented a whole schedule filled with live AV performances, installations, workshops, club nights, lectures, round table, and outdoor video projections.

The installations were set up at Le Commun (Bâtiment d’art Contemporain, BAC) http://www.centre.ch/, a building devoted to contemporary art that functioned as the festival’s headquarter and meeting point for artists and festivalgoers. I was utterly intrigued by Constellation Neverland by Sembilan Matahari http://www.sembilanmatahari.com/home/, an Indonesian-based collective of artists founded by Adi Panuntum. The installation consists of a group of floating artificial clouds and strings that create a simulated environment of rain, snow, and thunders. Constellation Neverland combines vision and sound content and explores how intangible aspects of the natural environment can inspire our thoughts and imagination.

When I entered the room where Chiaroscuro by Sougwen Chung http://sougwen.com/ was installed I felt that I was suddenly transferred into a vision made of organic forms and a dreamlike ambiance of lights and sounds. Brooklyn-based artist Sougwen harmoniously blends tradition and innovation into her works. In Chiaroscuro she created an immersive setting using the light/shadow interplay in order to illuminate and obscure the drawn forms positioned on the floor and on the walls of the exhibition room. I will talk more extensively about Sougwen and her art in a future article about her works and an interview I did during the Mapping Festival. 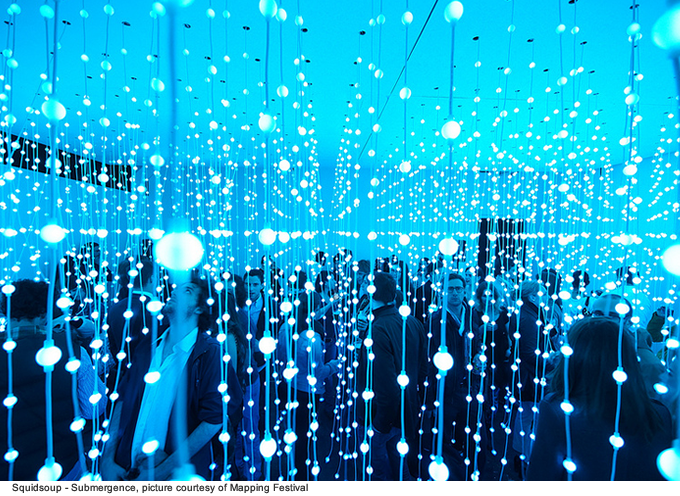 Squidsoup http://www.squidsoup.org/ is a group of artists coming from UK, Norway, and New Zealand that presented Submergence, a highly engaging installation in which the viewer is brought into an immersive environment made of pop coloured lights and electronic sounds. The interchanging colours of the installation seem to evoke different moods of the human being; the viewer walks through the lights and experiences from within a sense of space and time loss.

Another fascinating and emotional installation was Isotopes by Noemi Schipfer and Takami Nakamoto, a Paris-based duo known as Nonotak http://www.nonotak.com/. Isotopes reminds the form of a cage made of lights. The pulsing lights invite the visitor inside the installation; once into the core of it the visitor experiences a crescendo of lights combined with sounds, which suddenly become almost disturbing and violent. The inspiring idea behind this project was the Fukushima disaster that provoked lots of deceases and structural and environmental damages a few years ago in Japan.

The last piece that I visited at the BAC was Graphics Speak by Malaysian graphic designer Weng Nam Yap http://www.wengnamyap.com/. The installation involves the spectator through the use of record-shaped graphic patters that could be ‘listened’ with turntables and could be visualised on analogue tv screens. Navigating through the various installations was an amazing experience during the festival, and the BAC embodied the perfect venue for this marvellous journey through virtual and real settings. 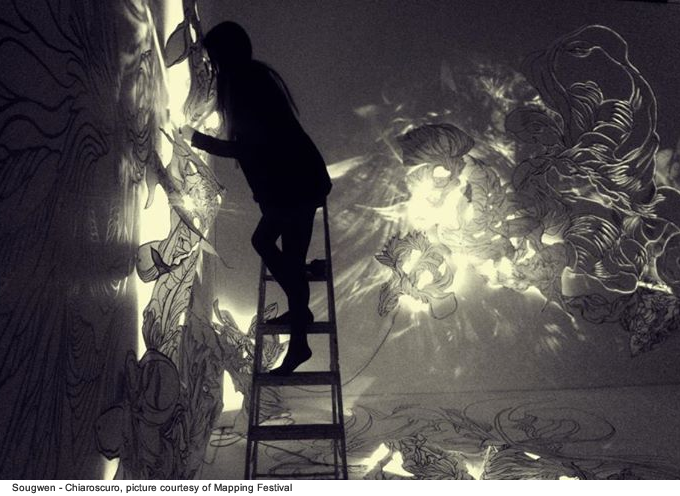 The BAC was also the place where Musical Mapping took place, an interesting talk led by audio-visual artist and journalist Peter Kirn http://pkirn.com/. Kirn, supported by the presence of Sougwen Chung and Alex Smoke, explained the differences between traditional/classical composition and digital/computer-generated composition, illustrating prominent examples and early experiments of abstract animations and sonic sculptures, and explaining how the intermingle of sounds and visuals can change the perception of music.

The festival’s highlights were the AV performances that took place at the Fonderie Kugler http://www.usinekugler.ch/Fonderie_Kugler, a cultural space that is part of the Fédération des Artistes de Kugler (FAK). The FAK is a collective platform devoted to research and artistic production, and a space that promotes different forms of emerging cultures and multidisciplinary projects.

Alex Smoke http://alexsmoke.com/ was the first artist that I saw during the concluding weekend at Mapping. He performed his latest project Wraetlic, an AV live show with terrific visuals specifically created by Japanese artist known as ARch Project http://www.arch-project.com/. Alex Smoke has a background in classical music and a musical education in cello and piano; today is one of the most talented artists of the electronic music scene. In Wraetlic, a term derived from the ancient Anglo-Saxon word ‘wraith’ and signifies a visible spirit, Alex creates a shadowy combination of sounds and distorted vocals that give shape to a dark and haunting live performance, supported by the striking visuals that perfectly match with the soundscape. I had the chance to briefly interview Alex before his sound-check, and this interview will appear on Digicult in a forthcoming article. 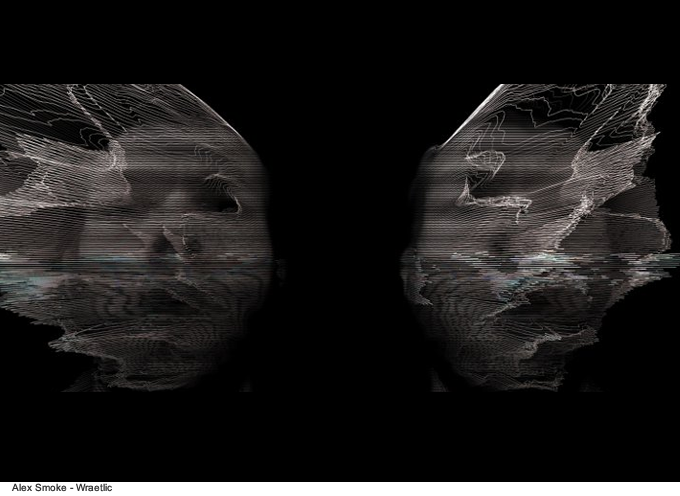 Another important event, which took place on Friday 10th May at the Fonderie, was the showcase of the German record label Raster-Noton http://www.raster-noton.net/. In that occasion we saw the performances of Grischa Lichtenberger (DE), the great Robert Lippok (DE) & Dimitri Delcourt (CH), ATOM™ (DE), and Kangding Ray (FR). Uwe Schmidt aka ATOM™ http://www.atom-tm.com/ was certainly the most awaited artist among the Raster-Noton’s roster. He presented the European premiere of his latest work HD, an AV performance in which he controls live both the sound and the visuals. Renowned figure of the electro/pop music scene ATOM™’s live is a really enjoyable show with a perfectly done combination of visuals and sounds. His serious and almost austere presence adds a further attractive element to the overall performance.

Mapping also offered a huge selection of club nights with outstanding DJs such as Jon Hopkins (UK) http://www.jonhopkins.co.uk/ and Clark (UK) at the club Zoo; an interesting series of workshops that aims to fosters new experimentations on various aspects of the digital creation, such as stage design, interactive video, VJ-ing, paint, and data art; a VJ contest; and several projections of movies and videos at the Cinema Spoutnik http://www.spoutnik.info/.

The concluding night of the festival was marked by the AV performance of Onionlab (SP) http://www.onionlab.com/ that presented Evolució at the Musée d’Art et d’Histoire http://www.ville-ge.ch/mah/. The Barcelona-based Onionlab is a multidisciplinary group that creates interactive projects, motion design movies, and audio-visual shows. Evolució is a spectacular experiment of architectural mapping based on the interaction between 3D projected images and the museum building. The piece is about time and change and ends with the symbolic deconstruction of the museum façade through the images projected. 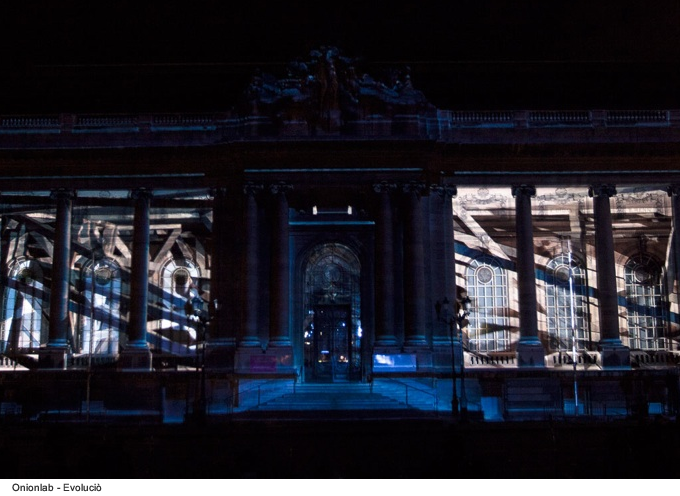 Despite the fact that the cuts of funding and the overall economic crisis make the organisation of cultural events a little more complicated these days, Mapping Festival represents a significant example of how important is the connection between the festival and the city. The selection of different venues around Geneva, the involvement of several public spaces and buildings, and the presence of local artists are important elements that reinforce the festival’s identity. Mapping Festival is evolving through the years thanks to the efforts of the curators and the festival’s team. Today Mapping is widely recognised as a festival that encourages the meeting of people and artists, fostering the exchange of ideas in the field of experimental audio/visual arts.

Thanks Mapping, see you again next year.