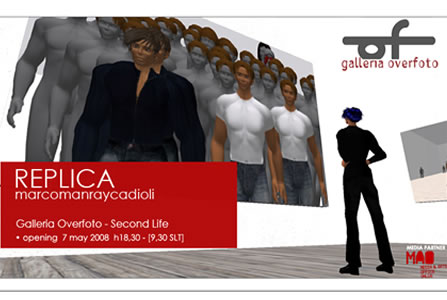 Marco Manray Cadioli, who’s been exploring the evolution of virtual worlds through photography for several years, introduces his first personal exhibition, “REPLICA”, for the opening of Overfoto Gallery a real life gallery who will open an exhibit space in Second Life.

Two series of photographies will be displayed: black and white landscapes from the series “Why is there something rather than nothing?”, photographies taken in Second Life wild areas still untouched by man, where Manray roams, wearing Ansel Adams’ shoes in a metaphorical West, achieving hyperrealistic and abstract results at the same time; and the series “Replica”, which gives the title to the exhibition, taken into an avatars’ clones illegal factory , with portraits of a crowd of clones that seems to walk towards us as a “Fourth Estate of Second Life.”

With “REPLICA”, Marco Manray Cadioli opens a new look on the world of Second Life, after the 2007 reports, published by various international magazines, such Libération, Elle, La Repubblica, and shortly after the book “Io, Reporter in Second Life”, recently published by Shake Editions from Milan, focused on his adventures as a net-reporter.

“Marco Cadioli is a photographer who drives his lens to the pixels that give life to the images that materialize on the computer screens. He takes pictures of landscapes, faces, gestures, what one would call everyday life; the peculiarity and the originality of this work is in the fact that the subjects of his pictures live inside the Web. Cadioli himself lives  in a way  in a metaworld. Although he resides in a precise physical place  Milan  some of his extensions have developed a self identity and have built some social relationships that we would call independent. 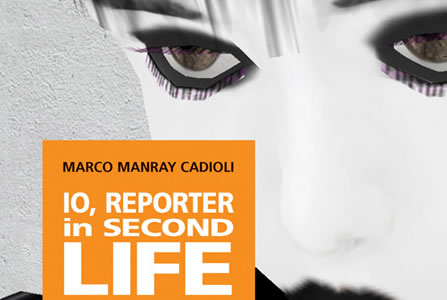 To evidence through photography the places of the Web and the entities that fill it is a process that needs a true melting between the photographer and the object of his research. So it was for Cadioli, who has never lingered in a far and detouched point of view but has literarly deeply immersed himself in that world: he has interfaced himself, to use a word proper of the technological language.

The artist does not judge the phenomena that catch his view, he rather interpret and represent them; each artistic creation becomes a window, wide open on the realities and an invitation to overlook at them. Cadioli’s pictures are an invitation to get over the weak boundary of the computer screen and to discover that what we persist in calling virtual is often more real than what is around us and of which we can feel the materiality. It is an invitation to tear the veil of virtuality, to discover how behind each shape that takes place on our screen it is possible to recognize a new display of the personality of people for whom the world, as we know it, has become an insufficient habitat.”