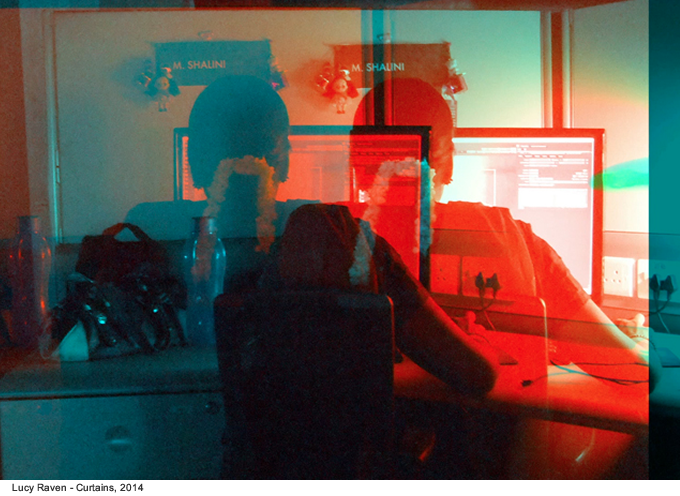 Portikus brings Lucy Raven to Frankfurt for Curtains, her first solo exhibition in Europe. The American artist works with the expanded means of film. By scrutinizing how the illusion of spatial depth is created and exploring her medium between the poles of the still image and 3D animation, she addresses a central question of filmmaking in the twenty-first century.

Since the demise of analogue film, increasingly immaterial processes of visual production dominate Hollywood’s industrial manufacture of animated settings. Actors play their parts in green screens; postproduction studios subsequently transplant them into programmed environments without any basis in reality. More than ever before, semi-animated film is akin to painting. The nexus between work and visual production, meanwhile, is growing ever more complex in a world of globalized labor.

For Curtains, a film produced exclusively for this exhibition, Lucy Raven transforms Portikus into a movie theater. The film itself makes reference to the original 3D technology: the video installation consists of stereoscopic images, a photographic technique used as early as the 1850s. It endows pictures with an illusion of spatial depth by presenting two views shot from two slightly different vantage points; the viewer, looking at them through special glasses, sees them converging into a single image that appears to possess depth. 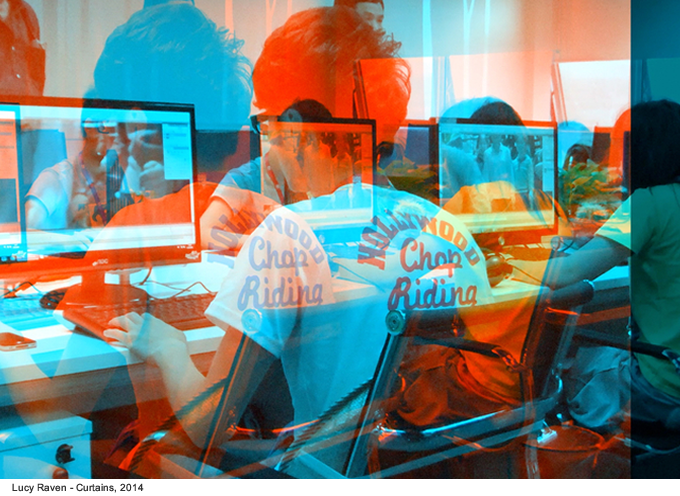 Unlike in stereoscopy, however, the two freeze frames in each scene of Curtains converge from the margins toward the center only to move apart again. They can be looked at with or without the assistance of 3D glasses, and show postproduction designers working on converting current movies into digital 3D experiences by rendering a computer-generated second perspective on the set shot for the original.

This technique proceeds frame by frame, and given the 24 frames-per-second standard of the movies, it is time-consuming and involves a large amount of labor; the job is often outsourced to places far away from Hollywood, in Asia, but also in cities like London and Vancouver where governments offer tax incentives to the film industry. With her stills gradually shifting into each other until they coincide, the artist compels a deceleration of the movies, a return to the isolated frame. The modern workers are poised, motionless, in an office space stuffed with flat screens used in the digital creation of imaginary bodies in illusory spaces. Their immobility contrasts oddly with their task—after all, they work for the “moving pictures”.

Just like the actor who plays his part without an actual movie set on location, the technician loses touch with the physical aspect of filmmaking: the real presence of sceneries, the materiality of the reel of 35mm film. In the new digital movie industry, the demise of the material goes hand in hand with the dissolution of the product’s ties to Hollywood: a fundamental shift that is one of the greatest challenges the cinema has faced since its inception. 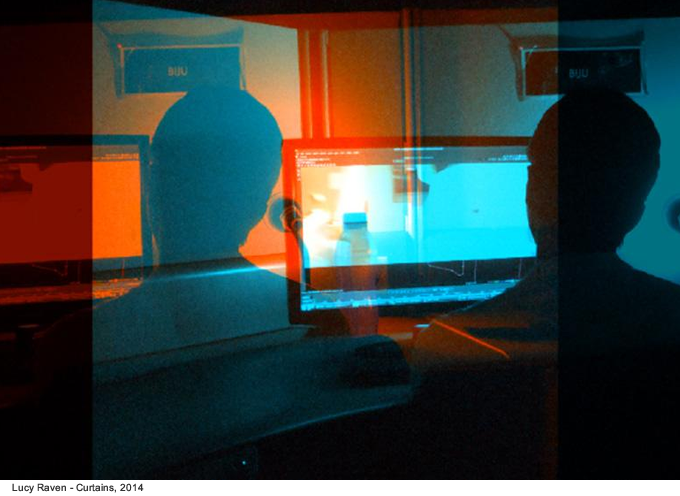 Lucy Raven (b. 1977) lives and works in New York. She studied at Bard College’s Graduate School of the Arts in upstate New York and recently taught at Berkeley and at Cooper Union in New York. Wide audiences have seen her works in solo and group exhibitions at the Hammer Museum, Los Angeles, the MoMA, New York, the mumok, Vienna, and elsewhere. Upcoming activities include a solo exhibition at Yerba Buena Center for the Arts in San Francisco in November 2014. This summer, Lucy Raven was resident artist at the Experimental Media and Performing Arts Center EMPAC in Troy, upstate New York. Her work is part of the collections of Tate Modern, MoMa New York, Guggenheim Museum, Whitney Museum, Berkeley Art Museum as well as mumok in Vienna.

The exhibition is made possible by support from the Hessian Cultural Foundation and the B3 Biennial of the Moving Image Autumn School.