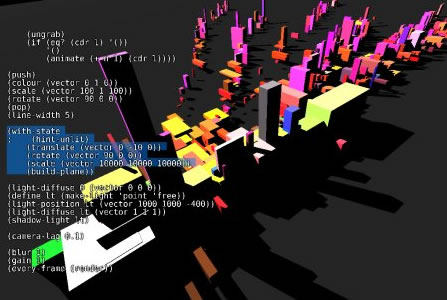 The purpose of this event is to let people know about a new and exciting development in computer music research, livecoding. Several London-based researchers in this area will perform a short piece using livecoding techniques, thus helping the audience get a hang on this new and cross-disciplinary approach to music creation.

Algorithmic composition is the technique of using algorithms to create music. Algorithms (or, at the very least, formal sets of rules) have been used to compose music for centuries; the procedures used to plot voice-leading in Western counterpoint, for example, can often be reduced to algorithmic determinacy. The term is usually reserved, however, for the use of formal procedures to make music without human intervention, either through the introduction of chance procedures or the use of computers.

Live coding (sometimes known as ‘interactive programming’, ‘on-the-fly programming’, ‘just in time programming’) is the name given to the process of writing software in realtime as part of a performance. Historically, similar techniques were used to produce early computer art, but recently it has been explored as a more rigorous alternative to laptop DJs who, live coders often feel, lack the charisma and pizzazz of musicians performing live.

You might find out some people working in the field, by checking out the following links:

– A Brief History of Algorithmic Composition (1999), john a. maurer iv 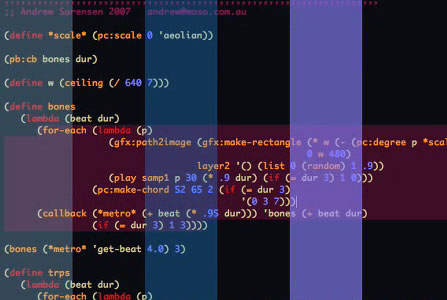 – Thor Magnusson
Thor will be performing using his recent creation, the ixi lang. The ixi lang is an approach for a live-coding system, consisting of an interpreter written in SuperCollider. As such the language limits and focusses musical expression, providing creative constraints, yet capable of plugging into the wide potential of SuperCollider itself.

– Evan + Jag
Evan livecodes visuals in Scheme/Fluxus , algorithmically generates command strings and sends them over OSC/LAN for din to evaluate and produce sound. Jag responds to Evan by playing the same instance of din as a conventional musical instrument.

– Andrew Brown
Andrew will be battling with the processes of succinct music representation as he performs with the Impromptu live coding environment. He will be deploying probability, recursion, and graph structures in an integrated offensive with his allies in music theory and acoustics in an improvised struggle with time and aesthetics.