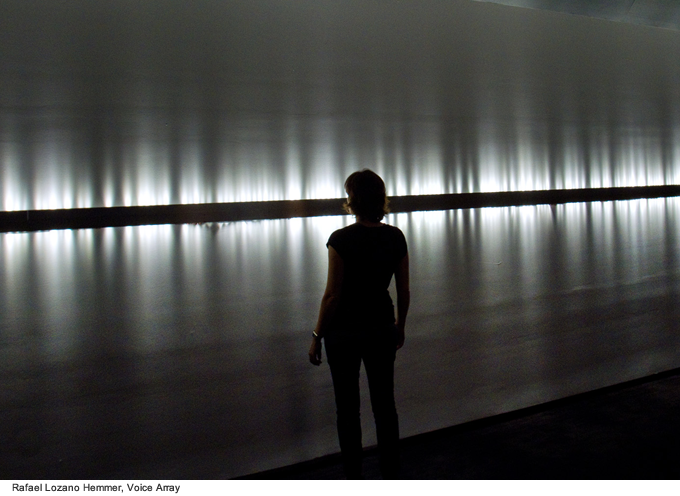 In 2015 the Grundy Art Gallery begins a major new international programme of exhibitions involving light, to coincide annually with the Illuminations—a historic five-mile-long lighting display which takes place in Blackpool each autumn.

Sensory Systems, the first of these exhibitions, will see the gallery transformed into a series of chambers, each containing artworks that create immersive, interactive, or sculptural environments affecting our sense-perceptual experience of space.

The five artists on display are Angela Bulloch, Rafael Lozano-Hemmer, Ann Veronica Janssens, Anthony McCall and Conrad Shawcross. The exhibition explores how these artists have utilized the medium of light in their work, by turns drawing, sculpting and painting with it to create the installations on display, with each space becoming akin to an ecosystem in which a given artwork inhabits and operates. 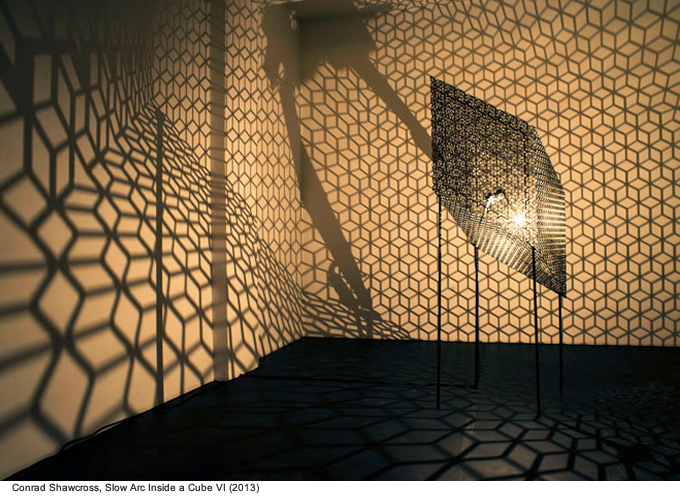 Alongside perceptual and aesthetic concerns run interests involving the qualities of the technology itself in generating the environments and encounters. For instance Slow Arc Inside a Cube VI (2013) by Conrad Shawcross creates a vertiginous shadow effect through the slow mechanical movement of a single lightbulb on the end of a wand inside a latticed structure.

Many of the works on display also share a concern for sequencing, cybernetics and interactivity, sometimes inviting visitors to participate. For example, Rafael Lozano Hemmer’s Voice Array (2011) combines different senses, with visitors speaking into a voice box and watching their sounds, together with others recorded by previous viewers, transformed into abstracted patterns of light around the room.

Upstairs in the Rotunda gallery, and running concurrently with Sensory Systems, the Grundy will be exhibiting 1930s designs for Illuminations, taken from Blackpool’s archive of working drawings, which extends across the 20th Century. The town was one of the first places after Paris, Los Angeles and New York to widely display neon, a radical new technology at the time, from the 1920s and ’30s.

To reflect the nightly nature of the Illuminations, the gallery will be open until 7pm on Fridays and Saturdays and now on Sundays from 12–4pm for the duration of the exhibition. The exhibition is curated by Grundy Curator Richard Parry.

Sensory Systems is part of LightPool, a 2.4m GBP project funded by the Coastal Communities Fund, Blackpool Council and LeftCoast to revolutionize Blackpool Illuminations, introducing digital mapping projection technology, widening the display’s scope to include the whole of Blackpool town center and increase participation through creativity and the arts.

Grundy Art Gallery is Blackpool’s art gallery and offers a year round programme of contemporary art exhibitions and events including solo and group exhibitions together with talks, workshops and educational activities. The gallery is housed in a Grade II-listed Carnegie building and has a collection that was founded in 1908, following a bequest by brothers John and Cuthbert Grundy. Grundy Art Gallery is supported by Blackpool Council and also receives funding as one of Arts Council England’s National Portfolio Organisations