While the genesis of this piece is in Ryuichi Sakamoto’s opera “LIFE” (first performed in 1999, for which Shiro Takatani the video aspects) as is evident in the title’s “fluid, invisible, inaudible …” it revisits the resources of sound and vision in “LIFE” now,several years later, in this new millenium, for an entirely new deconstruction and evolution of the work.

If we say that “LIFE” was an experiment conducted in opera’s linear, modern form at the end of the 20th Century, then the installation configuration of “LIFE–fluid, invisible, inaudible…” must surely be a non-linear, decentralized flow of audio and visuals which the visitors themselves enter to experience. 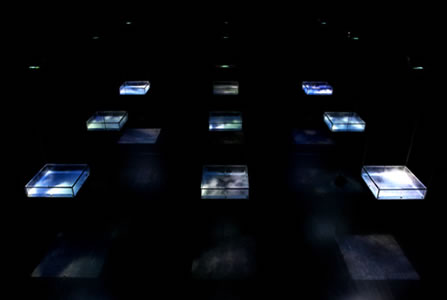 A grid of 3 x 3 acrylic aquariums, 30cm high and 1.2m square are hung, in a darkened room. Each carries a thin film of water inside. Each has speakers affixed at both ends. Inside of each a fog is artificially created using ultrasonic waves, percolating fluid patterns which hover between transparency and opacity.

Imagery transmitted down into these tanks from projectors attached above them–at times synchronizing all aquariums, at times decoupled and seemingly autonomous–shines down through this screen of kinetic patterns woven of water and fog, connecting the imagery while ceaselessly melting, floating endlessly between flows of meaning and meaninglessness, the concrete and the abstract. 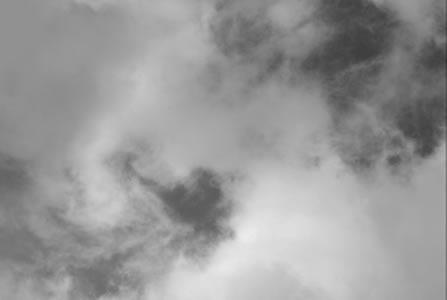 The sounds and visions in “LIFE–fluid, invisible, inaudible …” including the newly added materials, are divided into categories of 20 and 30, and stored on a computer hard disk. Being run by a random control program, the audio and visual files are called up randomly from this depository, to create an installation which is constantly changing.