Lesions in the Landscape by Shona Illingworth. A report from FACT Liverpool

How would it be if you could not form memories – Who are you really without the memories that make you who you are? Can we talk in terms of past, present and future, and how can we relate to it if the past provides no context for what is happening now?

These are the questions that surface after exploring FACT’s latest exhibition, Lesions in the Landscape by artist Shona Illingworth.  Lesions in the Landscape is a multi-faceted exploration of memory and loss, taking as its point de depart the contrast, or rather glaring similarities between the forgotten memories of a disappeared island population and the devastating effects of amnesia for Claire, an individual who struggles to form her own memories.

Memory is so intrinsic to our identity – both on a personal level, as is the case with Claire, just as it is with a community of island dwellers from St Kilda. If there is no-one there to remember them, how does the island exist in the public consciousness, and in what way is their history told? Which version of them lives on and how is the future of the island constructed? 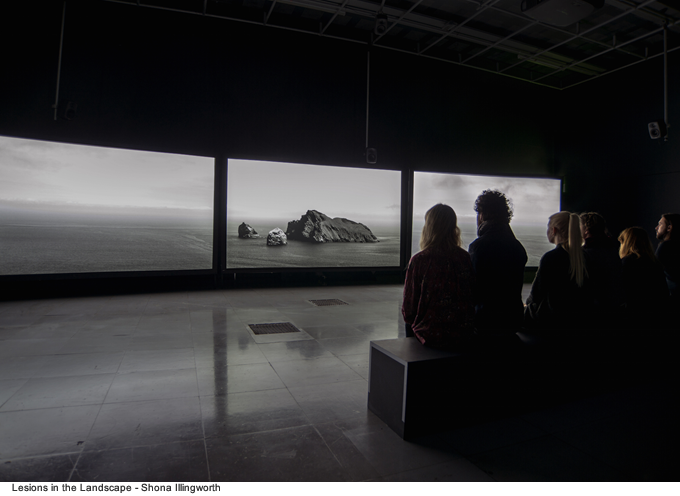 It was a conversation between Illingworth and long-term collaborator, neuropsychologist Martin A Conway which led to three years of collaboration and a growing friendship between Illingworth and Claire.  Conway and his colleague Catherine Loveday had been working with Claire, a woman who suffered with viral encephalitis aged 44. This illness caused a lesion in her brain that led to three distinct symptoms – dense retrograde amnesia (the inability to remember the past), anterograde amnesia (an inability to make new long-term memories) and prosopagnosia, meaning she cannot recognise faces.

This condition has dramatically changed Claire’s way of relating to the world around her, her relationships with her family and her experience of past, present and future. As she states in her own words: “The past existing as a space you can’t enter or feel; the future a space you can’t imagine.”(Claire, 2013) 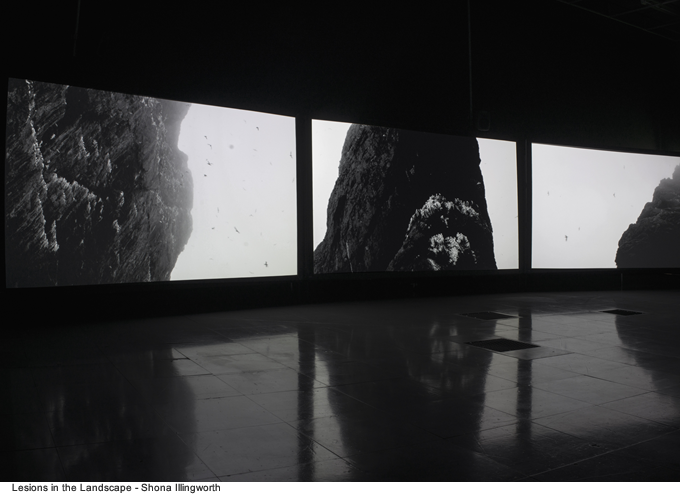 Illingworth married her deep interest in Claire’s condition and the subject of memory with a long-held respect for the history of St Kilda, an island 40 miles from the Outer Hebrides that was abandoned in the 1930s after a history of over 4000 years of habitation. Why St Kilda? Surely this isn’t the only island that succumbed to such a fate? The history of St Kilda is well-represented with over 700 books written about the island.

It is remembered very much as a derelict and forgotten land, abandoned by its inhabitants: a sorry tale of forced human migration and loss. However, Illingworth wants us to see it with new eyes, and place it in its true context: an island that contributes to the fields of science, natural history, and archaeology for example through the genetic mapping of a species of sheep, and one that also maintains a large radar installation as part of an MOD weapons testing range.

Even though St Kilda is remembered for the past, Illingworth sees it as very much part of the greater geo-political context – “not remote but very much present” (Shona Illingworth, 2015). Illingworth goes some way to plugging the gaps in the island’s alternative story – one that extends beyond its cliffs, into space, observed and mapped by satellites and the International Space Station, and even sinks into the land below the surface of the sea. 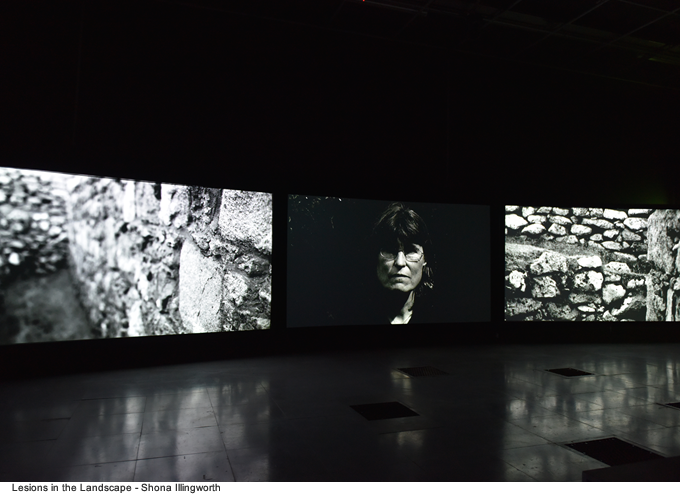 As the history books shape and even go so far as dictating the dominant narratives of St Kilda by only focussing on one version of its story, Claire’s amnesia means that much of her past is also constructed through the accounts of others. Her only way of retrieving much of her personal history is through the eyes of family and friends and therefore, her personal identity is influenced by the perceptions of those relaying those events.

Illingworth’s work is not so much about educating as about presenting “different ways to articulate” (Shona Illingworth, 2015) through not just one, but various media. It is her hope that people will gain greater insight into Claire’s condition and that questions will be raised. She attempts to offer insights through a multi-disciplinary journey into amnesia, through her striking video installation Lesions in the Landscape and related body of work, The Amnesia Museum. 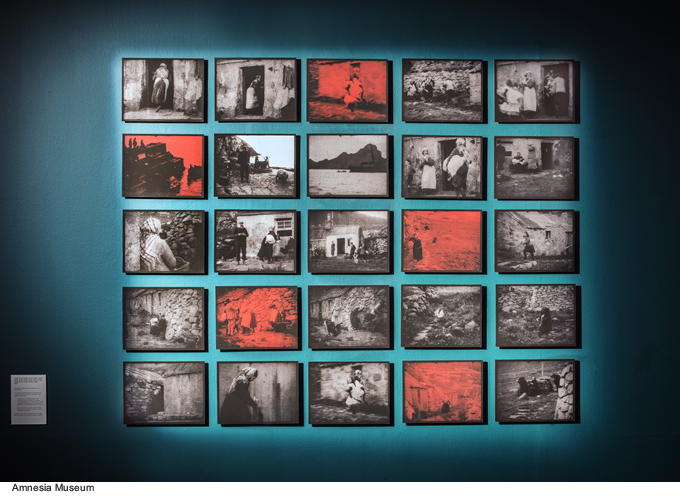 On entering gallery one, you are immediately drawn in and your breath is taken away while you are dispatched onto the shores of St Kilda, the scenes of which are interspersed with vignettes of Claire’s life, of her coming to terms with everyday living and her own voice is heard describing the feeling of not recognising her own belongings.

The film is comprised of a series of layers – a montage of archive footage segmented with shots of the International Space Station, also incorporating scenes of the MOD’s large radar installation, part of the extensive weapons testing range. Archive documentary footage is taken from the last day on the island, as filmed by an ornithologist who happened to be visiting that day. Women and children can be seen escaping the lens’s gaze, running away in their shyness:

“It is an incredibly painful moment; it is that moment of rupture with the past, with this deep history and a connection with a place. And it is hard to imagine what it must be like to have to leave a place that you are culturally, familiarly, emotionally, deeply connected to.” (Shona Illingworth, 2015) 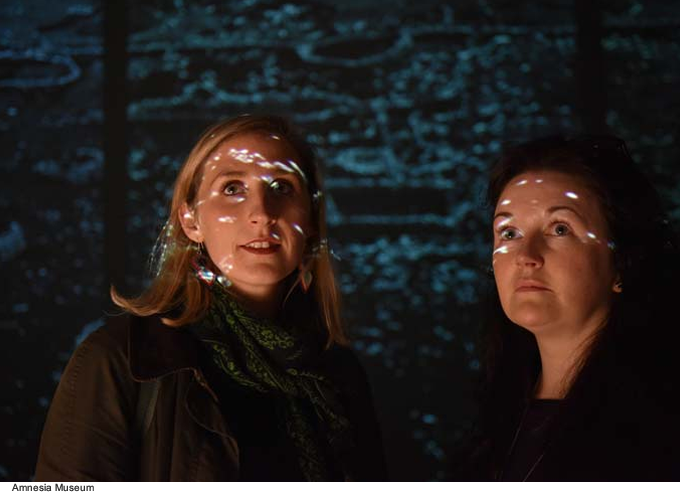 Voiceovers narrate the scenes of the St Kildan villagers taken from a book by Martin from the 1700s –and the 1930s archive film is relayed shot by shot, with archivist labels that only describe an image, the educated voice distancing itself from the actual, emotional scenario – The effect of this is to translate a sense of melancholy to the viewer.

It is sinister to find out that this footage was actually suppressed by the Scottish Office until 1979. Therefore, the matching stills that show each shot from this film footage displayed in The Amnesia Museum take on even greater significance, freezing the St Kildans in their history, imprinting them on the public memory, static and phantasmal. 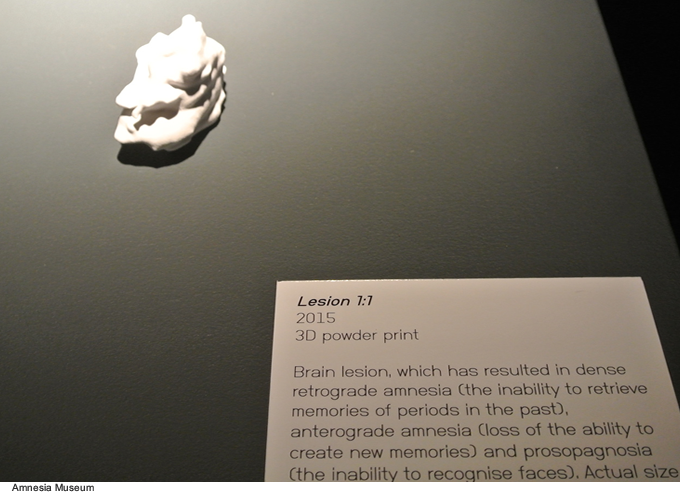 The Amnesia Museum offers tangible representations of St Kilda and of the concept of memory for visitors to explore.  Real world objects evidence the reality of St Kilda and present the obscure nature of a medical condition such as amnesia with objects that can be touched. Illingworth has given something such as a lesion that is “unfathomable” (Shona Illingworth, 2015) a full-scale physical form based on medical mapping that can be measured.

The 3D sculptures have been produced in collaboration with Andre Gouws of the York Imaging Centre (University of York) who provided the original fMRI scan of Claire’s brain lesion for a scientific study undertaken by neuropsychologists Martin A. Conway and Catherine Loveday, and with Lol Baker of Fablab (Liverpool John Moores University), who aided in the actual 3D printouts which were powder-printed, a substance Illingworth describes as “materially very beautiful” due to its sensitive appearance (Shona Illingworth, 2015).

Other objects to be admired in The Amnesia Museum include EEG sonification works developed using “Sensecam”, a device that helps Claire “to live and feel her own memories – memories that otherwise remain beyond reach” (Jill Bennet and Shona Illingworth, Lesions in the Landscape brochure, 2015), GPS maps of the St Kildan terrain produced by geographer Issie MacPhail and iron age fingerprints in clay alongside more “creative” representations, such as photo stills, pinhole camera shots and hand drawn scientific diagrams by Conway, with the pieces showing us “different scales and forms of capture” of things relating to forgotten memories (Shona Illingworth, 2015). 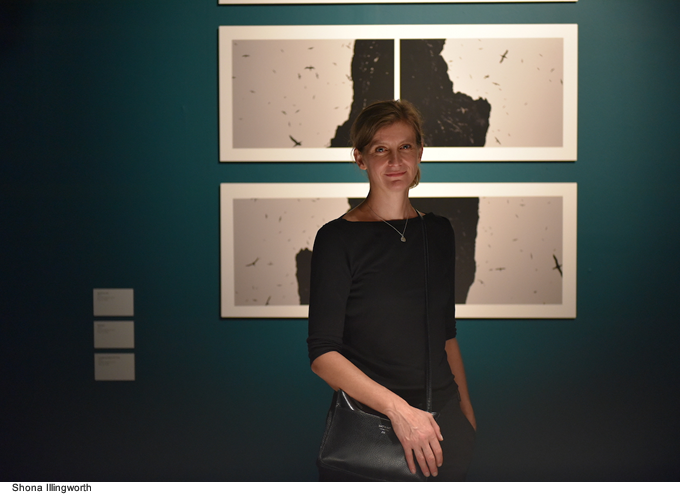 “I see [The Amnesia Museum] as an artwork in itself, one that is constantly changing and updating as it moves from venue to venue. So you will probably never see it in this configuration again because there’ll be things added and things removed. So I see it as an artwork that explores the landscape of amnesia as it’s enfolded in the present, rather than just the representation of amnesia as a condition that relates to things that we can’t access in the past.” (Shona Illingworth, 2015)

Illingworth has endeavoured to present a work of art that is both multi-layered and provokes debate. Since the topic of amnesia is not necessarily something we consider daily and “it’s difficult to access on an existential level” (Shona Illingworth, 2015), the exhibition causes us to stop and explore the impact of a world without memory or an accurate recording of history, and also to feel empathy with Claire.

The exhibition shows the positive outcomes reached by the ongoing efforts of medics and scientists, and we realise that there is a way forward for people living with amnesia. And as Illingworth puts it so succinctly in the context of society: “Amnesia or forgetting is very much shaping our present, and also as a consequence, the very way we can imagine the future.” (Shona Illingworth, 2015) 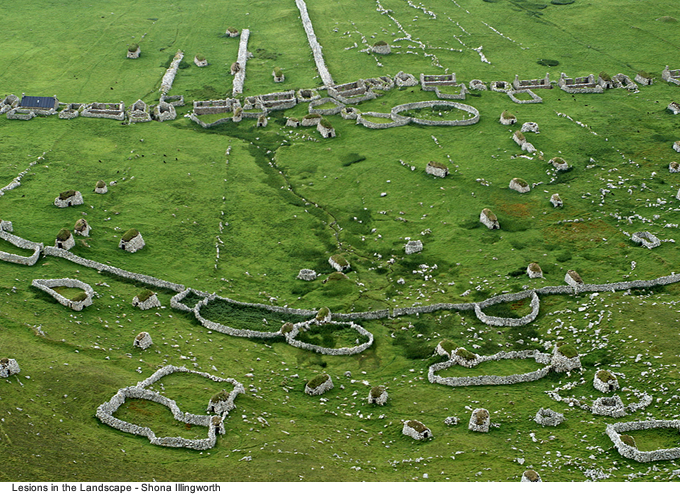 Lesions in the Landscape was recently shown at FACT Liverpool and will be moving on to New South Wales, Australia, the Outer Hebrides, Scotland and London, UK.